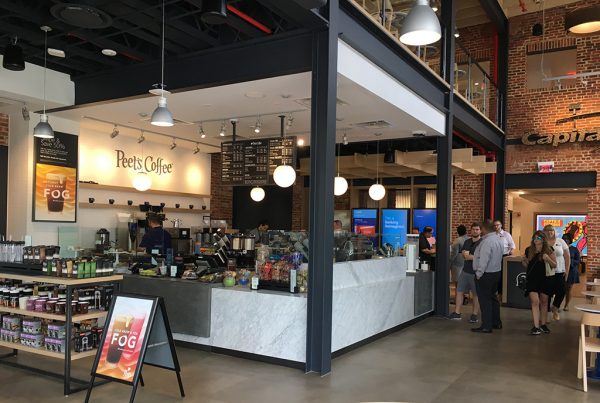 A storefront blending of caffeine and credit cards has opened in Carytown.

Capital One Café, a chain of coffee shop/bank branch hybrids that the financial giant has been rolling out nationally, opened Wednesday at 2933 W. Cary St. at the corner of South Sheppard Street.

It’s the second Capital One Café in the Richmond market, joining a spot in Short Pump Town Center that opened in 2017.

The concept features a coffee bar that serves Peet’s Coffee and baked goods from local bakery Pearl’s Bake Shoppe, as well as banking resources such as 24-hour ATMs, private meeting rooms and a staff of Capital One employees.

“Essentially, it’s a bank,” said Courtney Rhodes, Capital One spokeswoman. “We’ve just reimagined the banking experience to fit customer needs by making it digital. … As people are starting to bank more digitally, we wanted to create a bank that fits their everyday lives.” 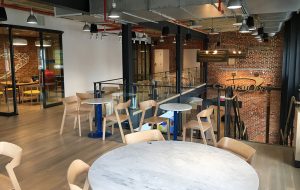 Capital One took out the ceiling of the building to make a two-story cafe.

Customers can do anything they could at a traditional branch, such as make deposits and open credit cards either with the help of a Capital One employee or digitally, she said.

Aside from paying for coffee, Rhodes said that all cafe services are free to the public and aren’t restricted to Capital One customers. However, Capital One cardholders have the perk of getting 50 percent off coffee.

The Carytown location opened in a space formerly occupied by Secco Wine Bar, which moved to 325 N. Robinson in 2016; and Sheppard Street Antiques, which moved to 1126 N. Blvd.; and a private acupuncturist.

Capital One is leasing the space, which has been under construction since at least early 2017. Capstone was the general contractor. Leo A Daly was the architect. Local artist Chris Milk Hulburt painted a mural on the Sheppard Street-facing side of the building once Capital One took it over.

Capital One introduced its cafes in 2011 after it acquired ING Direct, a bank that had held the rights to the cafe concept since 2001. There are now 31 Capital One Cafes in 11 markets nationwide.

A few doors down on Cary Street, the owners of Don’t Look Back recently closed their other concept, Best Friends Forever at 2915 W. Cary St., as the taqueria opened in Scott’s Addition at 3306 W. Broad St.

This is bizarre at best.

Banks are trying everything they can to keep foot traffic as more and more customers move to online and mobile options. Can’t hit those sales goals without customers coming in.

Of course you can hit those sales goals, just open up some fake accounts for existing customers. No brick and mortar locations needed for that!

Odd, and a bit annoying, that they chose to open the café directly across the street from a small, locally owned coffee shop. Way to support small businesses, Capital One. I don’t think Sugar and Twine needs to worry though, as they have fantastic homemade pastries, delicious coffee, and a very friendly staff.

Just another reason to patronize our local businesses!

Considering this is a business thats employed 8-10,000 locals for the last 15 years and whose headquarters is in Virginia, its surprising that so many treat it as an alien being. Capital One has been sensitive to historical architectural treatment of the building on Cary Street, and they provide a walk in opportunity for customers of the most popular credit card in the state. And you get Peetes coffee while you wait. I guess we needed yet another second hand store or hamburger joint?

I understand your point, Bruce, but for a business that’s been here for so long and touts their small-business and start up support to open a café across the street from a small, local woman-owned coffee shop it comes off as a bit hypocritical. It’s ok though, I’ve been out at Short Pump and walked past the café they opened up there. There’s never been more than a handful of people in the place. I expect the same will be true in Carytown. I was just in Sugar & Twine this morning and had a delicious egg white sandwich on… Read more »

Ironically, McDonald’s is already there. As are CapOne’s competitors, SunTrust and Wells Fargo. Carytown is not unfamiliar ground for national retailers, restaurants and bankers. Even the local vape shop has 70+ outlets. Its been pointed out that Capital One finances a lot of small businesses locally. It would be interesting to learn how many of the boutiques and restaurants on that strip are dependent upon their new neighbor to meet payroll. They want not be as adverse to CapOne’s presence as are many of the customers. Thanks for pointing out the breakfast sandwiches available at Sugar&Twine. They’ll get a new… Read more »

Hi Bruce: I know that you’re very pro-growth and love to see new business. That’s good, and I would support that also. You may be forgetting that there were 3 successful businesses in that building before the owner evicted them and Cap One jumped into the lease. Secco, thankfully, has taken their successful business elsewhere and seen it thrive. I think the point here, and in many of the comments, is the spirit and allure of a Carytown address. It’s independent, quirky businesses run by independent, unique people. Plan 9, World of Mirth, Sugar & Twine, etc would not be… Read more »

Bruce if the market didn’t generate enough demand for those consignment shops then they wouldn’t still be in business would they? Could be people are avoiding the suburban sprawl hell you are always cheerleading about

Not a comment of the iissue of local vs. national but they needs some better clarification on what these cafes are about. Wells customer here caught in the Amazon mess so I went to the CapitalOne. Not really a bank. It has staff that can help you do stuff on a tablet (open an account, check balances, transfer funds, etc) and ATMs that are 24-hour access but you can cash a check, get a money order, apply for a loan. Basically staff ATM attendants and not tellers. Coffee house is in the front and these sliding glass door cubes for… Read more »

It would have been nice to at least serve coffee from a local coffee roaster, we have several. That would have showed a sign of support for local commerce.

Ooh, a chain internet cafe with a bank teller!