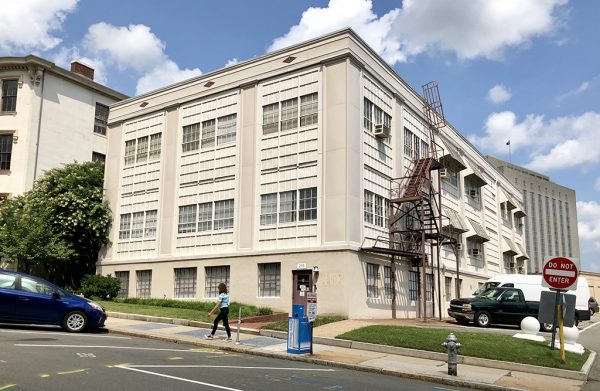 The state Department of General Services is selling the building at 217 Governor St. on Capitol Square with one main caveat: the buyer will have to move the building in its entirety from the site. (J. Elias O’Neal)

With its boxy stature, square windows and aluminum siding, the building at 217 Governor St. in Capitol Square sticks out like a sore thumb compared to the stately Governor’s Mansion across the street and Morson’s Row next door.

Now, the state-owned, tin-looking building near the corner of Governor and East Grace streets soon could be in the hands of a private owner.

That’s if the price is right – and if someone is willing to move it.

The state Department of General Services, which among other tasks handles the state’s real estate needs, is seeking requests for proposals to purchase and move the three-story, 17,000-square-foot office building from the Capitol Square grounds to make way for green space.

Holly Law Eve, director of DGS’s division of real estate services, said since the structure is not historically protected, the state will entertain options for moving it, which could include either dismantling it first or moving the entire building intact and on wheels – a measure department officials admit may be difficult but not impossible.

In fact, that latter option is how the building got to its current site in the first place.

The city of Richmond constructed the building in 1931 on a spot along East Broad Street as an annex to the then-neighboring city hall at 1001 E. Broad St. 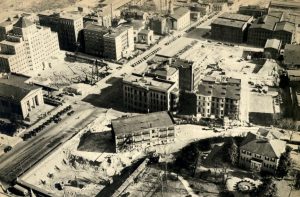 Photo from the 1930s showing the three-story aluminum building being moved to its current site. (Courtesy DGS)

Recalling the history of the structure, DGS spokeswoman Dena Potter said the city at the time was looking for a cost-effective way to address a growing city government workforce.

The result was the aluminum-clad structure, which was said to be the first use of aluminum in a prefabricated building in the state.

“We’re not sure where the aluminum came from,” Eve said. “What we do know is that at that time it was the most cost-effective use for constructing a temporary building.”

As the 1930s marched on, so did development around the Old Richmond City Hall and the state capital. State leaders selected the site of the aluminum building for a new state library (now the Patrick Henry Building).

But before construction could begin, the building needed to be moved from the site.

The city eventually sold the office building to the state, which by late 1938 began the process of moving the building 400 feet to its current location.

“It was quite the process,” Eve said. “They actually put large timbers under the foundation of the building to lift it up, and very slowly began moving the entire structure.”

Adding to the intrigue, the move was done while employees were still working inside.

“There was only one disruption to phone service during the move,” Potter said. “It was a slow process, but eventually it got to its final destination, where it’s sat for nearly 80 years.”

In the years since, the building has served as the quarters for several agencies, including DGS. But as the demand for state office space began to shift, so did the need for the building – prompting DGS to look to sell the property and have it removed from the Capitol Square campus.

Once removed, the site will become green space, as outlined in the Capitol Square’s master plan.

“When we completed our assessment of the site and property, it simply was not a good use of space,” Eve said. “It deserves a new place to call home.”

Applicants for the purchase and removal have until 4 p.m. July 19 to submit their sealed bids, which will be opened that day at 4:01 p.m.

All bids will be accepted, including those from out of the region and state, as long as the applicants secure the necessary licensing and permits to move the structure off the Capitol Square grounds.

Once a bidder has been selected, Eve said the state will work with them on a timeline to remove the building.

Good luck on moving this building ! The numbers probably won’t work even if the building is free !

Moved with employees inside in 1938. Holy cow, I will never complain again about any of my office moves. They were never THAT literal.