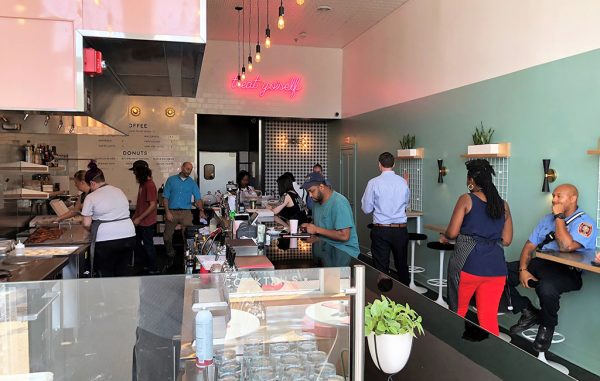 With the fryers fired up, the first retail piece of a local developer’s wave of planned improvements to the Hull Street stretch of Old Town Manchester has come to life.

“We make the dough in house and it’s a process that takes about two days to complete,” said culinary director Daniel Scherotter, who helped craft the menu with baker George Bagby.

Once the dough rises, the donut is fried in sunflower oil and then covered in toppings while still hot.

“Everything is made to order,” Scherotter said. “We don’t fry it until you order it, and when it’s complete, we bring it to you.” 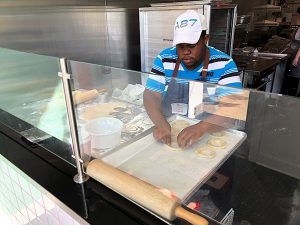 An employee readies the sourdough donut base.

The restaurant also features a sizable cocktail menu with 14 drinks that can be paired with donuts and desserts. They include the Bluebloody Mary, made with cucumber tonic, gin and cayenne horseradish. Beer and wine are also on the menu.

Hot Diggity is the first of several business ventures being planned by Michael Hild and his wife Laura Dyer Hild of Church Hill Ventures, a development firm that has amassed dozens of properties throughout the Manchester neighborhood for a variety of uses.

Other ventures the duo has in the works nearby include the Butterbean Market and Cafe, which remains under construction at 1204 Hull St., along with Dogtown Brewing Co. at 1209 Hull St.; and Manastoh Brewing in the old Bank of Commerce & Trust building at 1128 Hull St.

The firm also is behind the planned redevelopment of the former Siegel’s Supermarket site at 2005 Hull St. in Swansboro, where the couple plans to convert the space into a beverage and food hall featuring several iconic Richmond brands that were lost to history, such as Climax Beverage Co., Peter Stumpf Brewing Co., Rosenegk Brewing Co., Pin Money Pickles, Valentine’s Meat-Juice and Aragon Coffee. 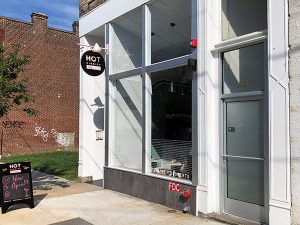 The Hot Diggity storefront is one of dozens of properties owned by Church Hill Ventures.

However, the future of the Hilds’ efforts may be in limbo, as their push to expand the boundary of the Manchester Residential and Commercial Historic District into parts of neighboring Blackwell and Swansboro has hit a snag.

The expansion, which would allow the Hilds and other developers in the area to recoup historic tax credits on some of their properties, requires a vote from the state Department of Historic Resources. The agency last week decided to delay the vote until September.

The Hilds since have said the delay jeopardizes their plans.

Hot Diggity adds to a growing collection of restaurants that are either established or preparing to open in Manchester.

Other eateries in the neighborhood include the Croaker’s Spot, Café Zata, Plant Zero, Camden’s Dogtown Market and Legend Brewing Co.