A recently launched print magazine with a focus on the environment has relocated its headquarters from New York to Richmond and spawned a like-minded branding agency.

The Regeneration Magazine, a publication highlighting businesses and individuals battling climate change, is reincorporating in Virginia and has set up shop in a home office in Manchester, where its staff is also running marketing arm The Regeneration Co.

The businesses are led locally by co-founders Kyle Calian and Davis Burroughs IV, who met as freshman-year roommates at American University and are rooming again in the house that serves as the companies’ home base.

Revenue from the branding agency, which formally launched last month, also is assisting the magazine, though Calian and Burroughs said their plan is to make the magazine a nonprofit that would donate proceeds to environmental causes.

“There are a lot of cool individuals and businesses that are doing really innovative things that weren’t, in our opinion, getting the press coverage that they deserved,” Burroughs said. “So we decided to create a purpose-driven magazine, though we try to keep it as nonpartisan, fact-based, unbiased as possible.” 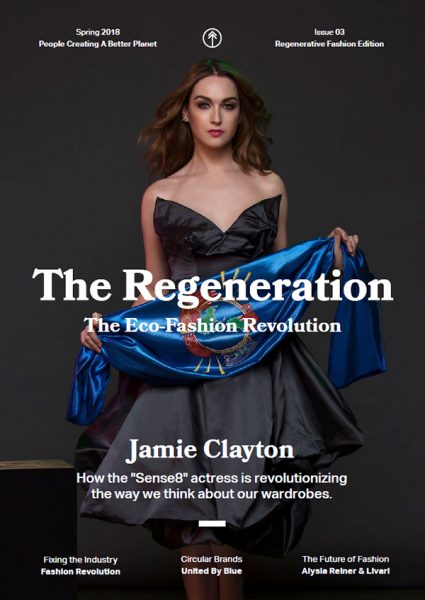 Each issue will focus on environmental topics, and highlight people and businesses incorporating ecological practices into their operations.

The latest one, totaling 245 pages, centers on the fashion industry and includes a write-up on Richmond-based blogging group Ethical Style Collective. A launch party for the issue was held at Shockoe Atelier, which carries the magazine, as do Brewer’s Café in Manchester and mobile retail shop Love This.

Despite challenges facing the print industry, Burroughs said they wanted to publish a print publication that could serve as a tangible resource and give them a chance to practice what they preach. He said the magazine is printed on paper that is compostable and recyclable.

“We wanted to have a product that people could actually feel and interact with,” he said. “It’s essentially an example of some of the products we’re looking to highlight, in that it’s a regenerative product, but also we liked the idea of people stopping to slow down and interact with a tangible media that they can feel and touch, as an alternative to the media blitz in the online world.”

The magazine is priced at $17 per issue and, depending on the market, costs between $10 and $20 per copy to produce, Burroughs said.

Burroughs said the magazine has several thousand subscribers both nationally and internationally, with about 70 percent in the U.S. and the rest primarily in the UK, Canada and Australia. He said the demographic is primarily female, with most readers between 18 and 35. The group also has about 3,000 email subscribers.

Burroughs, who followed his sister and mother to Richmond from Washington, D.C., where he worked as a congressional reporter and yoga teacher, helped Calian launch the magazine remotely along with a network of other contributors across the country.

He encouraged his former roommate to move to Richmond, where he said they’ve enjoyed not only a lower cost of living but also a warmer reception to their business ventures.

“The interest of the average people walking down the street, as far as being willing to stop and talk to you about what we’re doing and even to go so far as to offer help, is 10 times what it was in D.C. or New York,” Burroughs said.

Burroughs said the group is looking for office space.

Since launching the marketing agency in June, they have picked up a local client, business development startup The Sandbox. Burroughs said out-of-town clients include a construction company, legal software firm and dental offices.

Services include brand design, web design and social media marketing. Calian said the firm will serve as an extension of the magazine, with a goal of helping businesses define their societal or social mission.

“We believe that doing the most good, not just the pursuit of profit, will be the next wave of business as consumers demand more and more transparency and accountability from companies they purchase from,” he said.