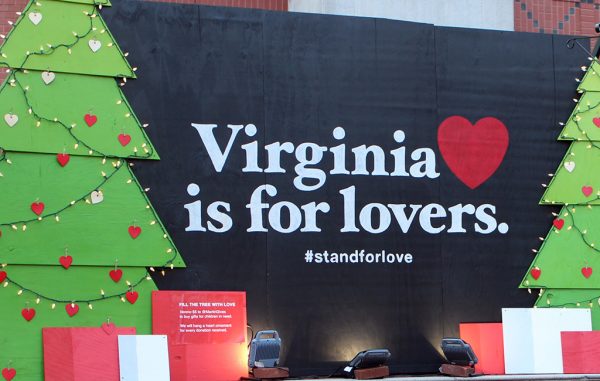 A Virginia is for Lovers sign outside The Martin Agency last year. (Jonathan Spiers)

A trademark dispute over the “Virginia is for Lovers” slogan is pitting the state’s tourism office against a local business.

Virginia Tourism Authority filed suit in late May against Recovered Gold LLC, a Richmond-based online retailer, alleging its use of the variation “Virginia is for Gun Lovers” violates the agency’s service mark for the nearly 50-year-old state tourism catchphrase.

The lawsuit, filed in federal district court, alleges that Recovered Gold used and continued to use the gun-lover phrase on its website and Facebook page, as well as in connection with merchandise sales, despite requests from the agency to cease and desist.

The agency, which does business as Virginia Tourism Corp. (VTC), argues that Recovered Gold’s actions “have deceived and caused confusion among the relevant purchasing public” and that the public is likely to believe the business’s products are connected or affiliated with the state or VTC.

Over the years, VTC has used its own variations of the slogan, such as “Virginia is for Beach Lovers,” “Virginia is for Wine Lovers” and “Virginia is for Craft Beer Lovers.” Its online store sells merchandise with those slogans and others highlighting such tourism topics as music, mountains, history and oysters.

A merchandising page on VTC’s website states the agency “cannot grant permission for you to produce merchandise with the Virginia is for lovers logo or any variation of the slogan.” It adds that VTC has an exclusive contract with Ashland-based Target Marketing for all merchandise bearing the slogan and associated logos.

The lawsuit argues that VTC has suffered damages from Recovered Gold’s use of “Virginia is for Gun Lovers” and requests that the court put a stop to the business’s alleged activities.

It seeks payment of up to $1,000 per day for each day that the business used the slogan, payment of profits the business made from merchandise sales, and that any remaining merchandise and materials bearing the phrase be delivered to VTC to be destroyed.

The suit does not specify URL addresses for the website or Facebook page at issue. An exhibit of those pages referenced in the suit could not be retrieved through an online database of court filings in the case.

A website with the address virginiaisforgunlovers.com loaded a “File not found” error message this week, and a Facebook page for a business named Recovered Gold LLC likewise failed to load.

The suit was served to Recovered Gold owner Andrew Newell, who registered the LLC with the State Corporation Commission in December 2015. It lists as its principal office a residence on East Rois Road in Henrico County.

Attempts to reach Newell for comment were unsuccessful Tuesday. He is represented in the case by Eric Howlett of Sands Anderson. A voicemail left for Howlett was not returned Tuesday.

VTC is represented by Christian & Barton attorneys Belinda Jones and Noelle James. Jones would not comment on the suit.

A response to the suit had not been filed as of Tuesday.

Next year marks the 50th anniversary of “Virginia is for Lovers,” which was created by local ad agency Martin & Woltz, a predecessor of Richmond ad giant The Martin Agency. Martin is in the midst of an 18-month, multimillion-dollar contract with VTC, which named Martin its lead media agency in December.

Correction: VTC’s merchandising contract is with Ashland-based Target Marketing. An earlier version of this story incorrectly referred to the national retail chain.

I love it it’s the truth