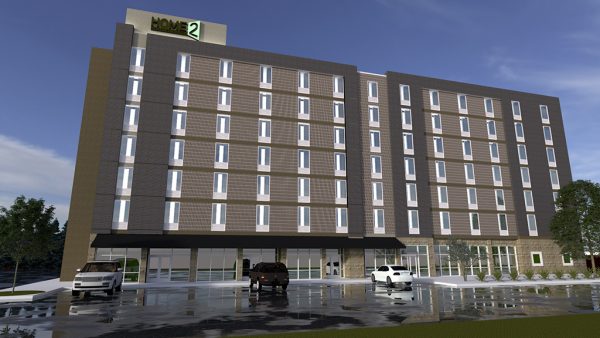 Shamin’s second Home2 Suites is being planned at 2925 Emerywood Parkway next door to its Embassy Suites property in Henrico County. (Shamin Hotels)

On the heels of its first acquisition in Charlottesville, a seasoned Richmond hotelier is keeping the pedal to floor with two more local new construction projects in its plans.

Shamin Hotels is preparing to break ground on a Residence Inn in Midlothian, near Johnston-Willis Hospital, as well as its second Home2 Suites Hotel in Henrico, near the Interstate 64 Glenside interchange and West Broad Street.

The four-story Residence Inn would rise at 10701 Center View Drive, in a surface parking lot behind Shamin’s DoubleTree Hotel and Conference Center at 1021 Koger Center Blvd. 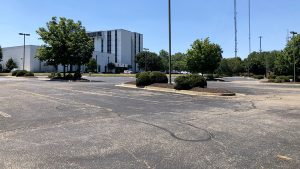 The surface parking lot behind the DoubleTree Hotel and Conference center will be turned into a Residence Inn. (J. Elias O’Neal)

The Residence Inn will house 111 rooms, according to plans filed with Chesterfield County.

Shamin CEO Neil Amin is targeting a summer 2019 opening for the Residence Inn, adding that upgrades to the neighboring DoubleTree’s ballroom and conference center also will occur as the group launches construction on its new hotel.

“There is a lack of upscale, extended-stay hotels in this area of Midlothian,” Amin said. “There are three hospitals in the area, Johnston-Willis, St. Francis and Chippenham, so there is a demand for this type of product in the market.”

Shamin also recently filed plans for a six-story Home2 Suites Hotel on a wooded lot the company acquired last fall behind its Embassy Suites at 2925 Emerywood Parkway in Henrico.

It purchased the 2.7-acre lot in October 2017 from Virginia Blood Services for $640,000, according to county property records. It later merged the property line with the neighboring 5.7-acre Embassy Suites parcel, also last year.

Because of its height, the Emerywood Parkway project must receive approval by the Henrico Planning Commission.

The 120-room hotel would be Shamin’s second Home2 Suites Hotel, joining a seven-story, 135-room version it previously announced for 209 Towne Center West Blvd. in Short Pump. That project is also still in the works.

That second Home2 Suites Hotel will add to the collection of hotels near the Glenside interchange, where another company is building a 119-room Residence Inn on the former Skilligalee restaurant site at 5416 Glenside Drive.

“It was attractive to us because of its proximity to downtown, Innsbrook and Short Pump,” Amin said of the Emerywood plot. “It’s a central location where people want to be.”

Shamin has yet to select general contractors for the two new projects. Amin would not disclose an estimated cost to build the hotels.

Shamin owns and operates 57 hotels, including its latest grab of an existing Holiday Inn in Charlottesville.

And that tally will continue to climb.

Across from the Home2 Suites Hotel site in Short Pump, the company is developing a 126-room, six-story Hampton Inn & Suites on about 4 acres just west of the GreenGate development.

Shamin also is converting an old office building at 501 E. Franklin St. downtown into an 87-room Moxy Hotel by Marriott.

the story of PC Amin and his family is the great American success story. its worth a special edition of Bizsense.