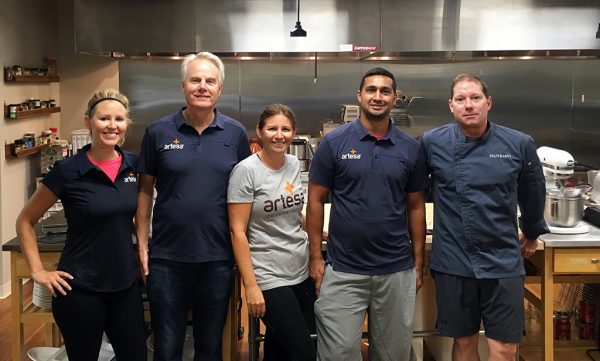 As it prepares a national launch, a West End-based startup is looking to haul in another big batch of cash.

Nutriati, which breaks down chickpeas into proteins and flours to be used as ingredients for health food manufacturers, is amid a $4.5 million equity capital raise, per SEC documents.

It’s the company’s second multimillion-dollar capital raise in a year, as a separate offering in 2017 brought in $10 million, some of which came from local venture capital firm NRV.

Founded in 2013 by Richard Kelly and Michael Spinelli, the startup operates out of a test kitchen at 9722 Gayton Road in Gayton Crossing and uses a production facility in North Carolina.

Mass production of the protein began in late 2017. It can be used a replacement for traditional dairy proteins in consumer products. It also makes a chickpea-based flour, which it launched in early 2018.

Kelly did not disclose any of the companies that use Nutriati’s products. He did say its products can be used in beverages, baking ingredients and supplements.

Prior to launching Nutriati, Kelly worked as a supply chain director for Altria, while Spinelli worked in product development for Ben & Jerry’s Ice Cream and hummus giant Sabra Dipping Co.

Nutriati formerly was based in the VA Bio+Tech Park downtown before moving to the Gayton Crossing location last year.

Kelly said Nutriati started with a lean staff of three and has been slowly adding to it, including hiring Liz Doerr as its interim chief financial officer. Doerr formerly was director at NRV and also serves on the Richmond School Board.

Doerr also recently was named to local accelerator Lighthouse Labs’ board of directors, which Evatran CEO Rebecca Hough left as she took a job at Tesla on the West Coast.