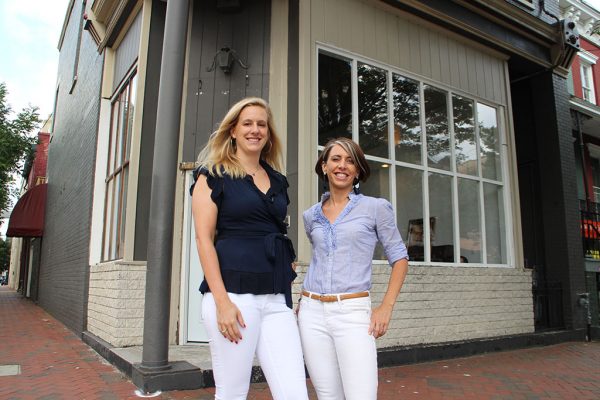 Elisabeth Edelman, left, and Stevie Toepke in front of the building at Clay and Third streets. (Jonathan Spiers)

Two local businesses in different lines of work have turned a Jackson Ward-area storefront into a shared home base.

Office design firm Flourish Spaces and public relations outfit Golden Word have set up shop at 221 E. Clay St., a 6,200-square-foot building on the corner of Clay and North Third streets that once housed Sweetopia bakery.

Toepke is sharing the ground-floor space with Golden Word’s Elisabeth Edelman through a rental agreement, and long-term plans are for Skinner to potentially open another retail outpost in a storefront facing Third Street that’s also part of the building. Peace of Mind Art Studio, a tattoo and piercing shop, currently leases that space.

The move marks the first office presence for both Flourish and Golden Word, which Toepke and Edelman each started in 2016 after meeting years before.

“We found that we were venting/counseling one another around learning the business,” Toepke said. “I had told her that I was looking to get some space, and she was looking to add to her team and said, ‘When you get it, let me know and we can do this all the time.’”

Toepke worked with Christina Jeffries of commercial real estate brokerage 7 Hills Advisors to find the building, which she and Skinner purchased through an LLC for $610,000, according to city property records. The latest city assessment valued the property at $377,000.

Edelman said she signed a one-year lease with Toepke to share the office space, which also provides a showroom for Flourish’s interior designs.

“I didn’t feel like I could be in the space business and not have a space of my own to show,” Toepke said. 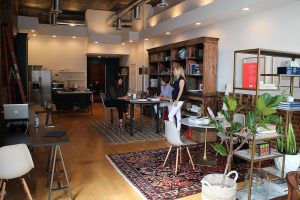 For Edelman, the space provides a home for her PR business, which she’s grown in two years from a one-woman shop to its current team of two full-time employees and two interns.

Like Toepke, Edelman, a UR grad, said she’s benefitted from having a peer to bounce ideas off of as she learned the ropes of managing a business.

“Running a business has been harder than I thought it would be, for sure. That said, I wouldn’t do anything else,” Edelman said.

Joining Edelman at Golden Word is Katherine Sheehan, formerly with The Martin Agency on its communications team. Previously based in Richmond, Sheehan worked in Martin’s New York office and took a job with another agency before the office closed in 2017 in the wake of company layoffs.

Toepke has seen comparable growth with Flourish, which has a team of six, with Toepke and another full-time employee, two part-timers and two interns.

Toepke started the business, which focuses on workplace interior design, after a career in human resources roles at such companies as Anthem, Harris Williams & Co. and MeadWestvaco, now WestRock. While serving as a consultant with The Frontier Project, she tried her hand at designing the company’s Scott’s Addition space, leading her further in that direction with collaborator Alicia Conrad, who has joined her at Flourish.

Since committing to Flourish full time two years ago, Toepke and her team have designed spaces for culinary school Mise En Place, youth golf group First Tee of Greater Richmond, electric car charger startup Evatran and co-working space The Broad, which Toepke operated out of before finding the building.

Flourish and Golden Word are not alone in their approach to sharing office space.

Beyond The Broad and other co-working venues such as Gather and 804RVA, similar scenarios can be seen with Release the Hounds’ lease to Egghunt Records, which moved in with the Broad Street branding agency in 2016. In the Fan, a group of businesses, including design firm Campfire & Co., went in together on a shared office space that opened last year.