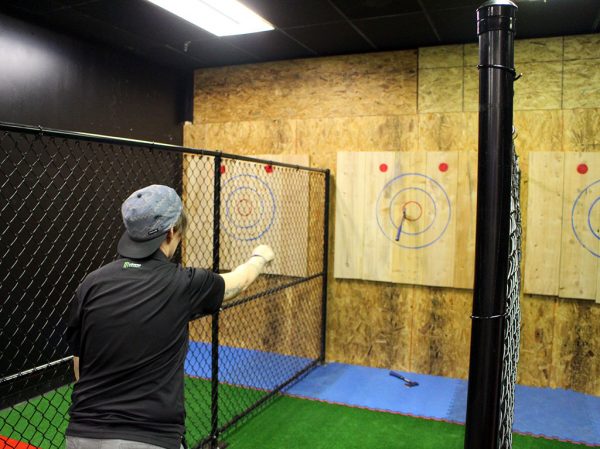 G-Force Karts will add the first axe-throwing lanes to its facility at 4245 Carolina Ave. in Henrico

An edgy activity that’s become popular in larger cities is headed for the Richmond market.

It will be the first local venue to tap into the trend of axe-throwing, which has fueled the rise of chains such as Bad Axe-throwing and Urban Axes opening outposts around the country.

For G-Force owner Jason Yarema, the lanes, which will open Tuesday, add to his facilities offerings that also include a laser tag arena and arcade.

Akin to darts, axe-throwing participants stand about 12 feet away from a wooden board and throw axes of various sizes at a bull’s-eye.

The throwing lanes will replace a virtual reality gaming area within G-Force.

Yarema, who opened the facility in 2002, said using axe-throwing lanes will cost about $20 per hour per person and will only be for those 21 and up.

So beer and throwing axes, what could go wrong? And to think we banned lawn darts when I was a kid. haha Hey if the insurance company will cover it, go for it.

Axe throwing is a trend? C’mon. Maybe among the bib-overall crowd in Crib Death, WV, but I can’t believe anyone with a brain would seriously enjoy doing this. Then again, Dwarf-throwing did attract a certain demographic segment a few years back…

Are they insane? Beer and axes? I was there a few weeks ago for a laser tag birthday for my son. I saw where they were working on this…it seems like a crazy/reckless/insane thing to do. I can’t imagine what their liability insurance must be. I will not be returning as long as axes are flying near kids… I know what my friends and I were like at age 21, and I can’t think of a worse group of people to encourage throwing axes around kids. Wow. I had no idea this was a thing…

Hey, Axes dont kill people, people kill people.
I am deeply offeneded by anyone who wants to restrict my God given RIGHT to throw axes.
You can have my axe when you pry it from my cold dead hands.
They should keep razor sharp axes in every school, church, bar and go-kart palce because it would make us all safer.
Also I’m against locking them up in any way at any time.
I’ll carry my axe into Starbucks sometime because I’m standing up to “Killary”.
Bengazi!
Whitewater!
No Collusion!
Make Axes Great Again!

Considering 50 places opened from 2016 to 2018 and now 50 will open before the end of 2018. I would say it’s far from reckless. If you looked you would see fencing. We have rules and realistic safety measures. It’s 12 feet from the target in a fenced in separated area. Axes flying near Kids? As the owner, I have 4 children. My children play there and one of Them works there. Why would I ever put in an activity that would be unsafe? It’s adults only. Breweries put this in and they actually serve alcoholic beverages as the main… Read more »