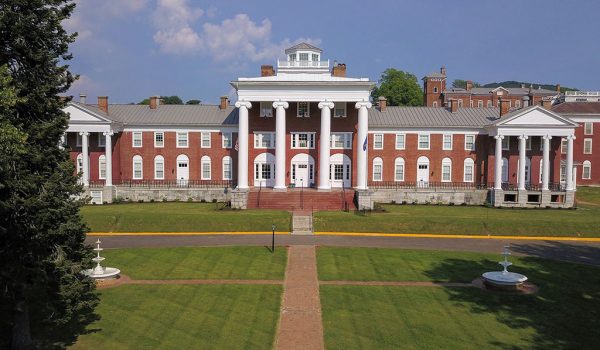 Robin Miller and Dan Gecker have redeveloped their fair share of old buildings.

But when the seasoned local- development duo decided to branch outside of Richmond to restore and convert a long-abandoned insane asylum and prison in Staunton, their idea turned into a project that’s been more than 10 years in the making.

“It was much more complicated than, say, a warehouse in Shockoe Bottom,” Miller said.

The 12-year undertaking finally culminated last month with the opening of the Blackburn Inn, a 49-room hotel in the former Western State Hospital, which was known at one point as the Western State Lunatic Asylum.

And they’re not done yet, as the 33,000-square-foot 19th-century property is the linchpin in Miller and Gecker’s larger plan for the surrounding 80-acre campus. 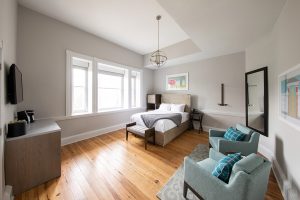 One of the hotel’s initial 49 guest rooms. More are in the works in separate buildings.

While planning the hotel, they’ve added condos, apartments and restored houses to create the neighboring Villages at Staunton. They also have a plan to expand the Blackburn by converting two adjacent buildings that will add about 50 guest rooms.

Miller said they always knew the Blackburn project was going to take a long time.

He said hotel discussions began about 12 years ago but he didn’t really “get serious about it” until seven years ago. Six of those years were spent on gaining plan approvals.

They secured funding in part using state and federal historic tax credits (the building originally was designed by Thomas Jefferson protégé Thomas Blackburn) and had to take their plans through the Department of Historic Resources and then the National Park Service.

There are several buildings on the lot, and each in need of different designs and approvals for tax credits. For the Blackburn, the nature of its structure as a former hospital required 27 different floor plans to create the hotel’s 49 suites.

“We couldn’t just push those walls because they were built in 1828 and were 24 inches thick,” Miller said.

According to Miller, the NPS initially required his team to submit detailed architectural plans for five of the oldest buildings on the lot before approving plans for the main Blackburn building. With ideas for how to utilize some other buildings still percolating, Miller didn’t want to waste time and resources on hypothetical ones and instead proposed submitting plans for particular buildings as needed.

The complexity of the project led to then-DHR Director Kathleen Kilpatrick to advocate to NPS about the need for more flexibility concerning future use of other buildings on the campus.

“Had she not done this, and been successful, the project would have been much more difficult, if not impossible, to pursue,” said current Director Julie Langan.

“DHR’s help and support got us over the finish line,” Miller said.

They also changed the project’s financing.

In earlier stages, Piedmont Capital Partners was involved in seeking investors, before Miller decided to handle finances on his own. While he declined to disclose the final budget for the Blackburn, he said some funding was obtained through a loan with Xenith Bank (now part of Union Bank). 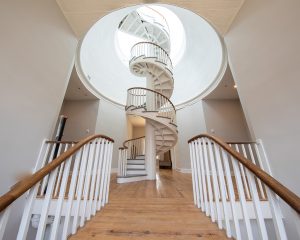 The hotel features a spiral staircase, as well as a restaurant called the Second Draft.

Inn construction began a year ago. Miller decided to break the construction into phases, starting by rehabbing the most prominent building of the former hospital first. He aims to restore other buildings to bring the room count to more than 100.

They worked with three architects for the project. Mimi Sadler of Sadler & Whitehead assisted with the historic tax credit approval. Bruce Shirley of Apex Designs, and Bob Mills, the man behind many Richmond restorations, handled architecture plans. David Auman and his Capstone Contracting company handled the construction.

Richmond-based Retro Hospitality helped with financial modeling for the property and has a long-term agreement to oversee operations at the Blackburn.

Room prices range from $169 to $229 per night, though prices are currently lower as part of a grand-opening special.

The inn also houses Second Draft, a restaurant named for the table architects use to draft their work.

The hotel also works with galleries to showcase work from local and regional artists, but Miller said there’s a broader draw to bring in tourists.

“The biggest amenity for the Blackburn Inn is downtown Staunton itself,” he said. “Staunton is the coolest small city in Virginia. It’s very Norman Rockwellian.”

Amen! I came here to make the same comment!

Absolutely. To have referred to the building simply as an asylum, after noting its original name, would have made the point. Adding the word “insane” merely distracts the reader from what is going on at the site now, by using a term that was too old-fashioned even for 1894!

Otherwise, though, a well-narrated article about an interesting project.

Could have been done a little cozier. Very bland.

Please, use the proper terminology. “Psychiatric hospital” or “mental hospital” would suffice. Insane asylum, sanatorium, and lunatic asylum are very outdated, unless you wish to refer directly to the original name of the hospitals. My grandfather was a psychiatrist here in Richmond and retired to Staunton, where he continued to serve the mentally ill at this hospital.

Absolutely, hospital is where people go to find help. Insane or Lunatic Asylum is my office at work. haha

Everyone complaining about “Insane Asylum” is a bunch of snowflakes. Please go sit in your “safe space” and cry before commenting.

Congratulations on your first article, as far as I can tell. Interesting story about one heck of a building and its history.

Great story, fun building and I’m glad it’s been put to good use. I love Staunton–would like to live there.

My husband and I toured this property several years ago, when the developer was trying to sell the suites as condos. We are both architectural historians, so we were there exploring Blackburn’s design. The original walls, thresholds, walls, doors (including a very thick restraining cell door – the cell made into a wine cellar in a kitchen) with interesting scratches and kick marks. The floor plans for the condos were very linear – not desirable for a house, but probably very functional for a suite. It’s a beautiful building, but I do have to say I had the most uncomfortable… Read more »