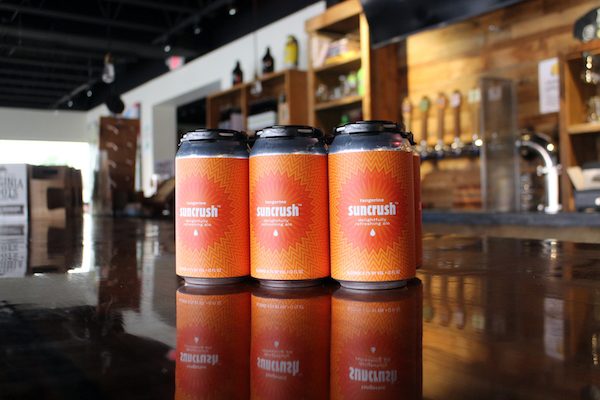 Suncrush is currently available only at Hardywood’s taprooms in Richmond, Goochland and Charlottesville.

It all started with a day at the beach.

It was 2016, and Hardywood Park Craft Brewery co-founders Eric McKay and Patrick Murtaugh were on weekend trips to different beaches. They each brought with them some cans of beer from their brewery.

“I remember I had brought some Great Return (IPA) cans out with me on the beach,” McKay said. “It’s one of my favorite beers but it’s got 7.5 percent alcohol. It’s big hoppy beer with some caramel malts…it’s great for certain occasions, but it’s probably not the ideal beach beer.”

“I had one of our Berliner Weisses, and they seem like they’d be good outdoor beers, but you drink another and it’s just a little much, drinking sour beers on a hot day,” he said.

Upon their return to their Richmond taproom, they started considering a more drinkable, beach-friendly alternative.

“What would be the perfect beach beer, the perfect outdoor beer, the beer you want to take with you when you go hiking, fishing, golfing, or whatever?” Murtaugh said.

The roots were laid for Suncrush, a new offshoot brand that is separate from the Hardywood brand and will have its own line of beers.

The duo trademarked the Suncrush name and played around with some recipes.

McKay and Murtaugh decided their ideal beach beer would be low in alcohol content, with reduced gluten, containing some tea elements and have a bit of a fruity flavor.

But they weren’t initially able to brew it in mass.

“(Brewing) capacity was an issue,” Murtaugh said. “We were going full throttle in Richmond and didn’t have time or space in the tanks to do anything other than what we were currently doing.” 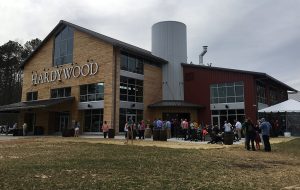 But its new West Creek location opened earlier this year and freed up room in Hardywood’s tanks. After two years on the backburner, Suncrush first went for sale last week at Hardywood’s locations in Richmond, West Creek and Charlottesville. It’s available in 12-ounce cans for $5 or $10 for a 6-pack.

The first version of Suncrush is a 4.2 percent ABV tangerine sparkling ale, and McKay said they’re planning to experiment with other flavors including a ginger lime and grapefruit variant.

Though Suncrush’s beers are brewed and canned at Hardywood’s facilities, it is set up as its own separate entity.

“Lots of our beers at Hardywood are often traditional or focus on using local ingredients and barrel-aging techniques,” McKay said. “This is kind of a departure from that, and we felt it deserved its own entity.”

McKay added that if Suncrush proves to be popular, they’d look into distributing the beer.

Hardywood is also into the planning process for the outdoor amphitheater that is set to be built at its West Creek location. McKay said they’re hoping to begin construction on that this fall.