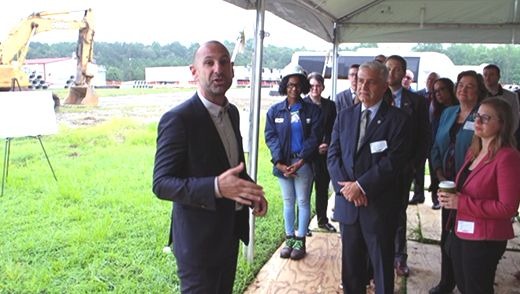 The largest hummus-making facility in the world is getting even larger in Chesterfield County.

Sabra Dipping Co. held a groundbreaking ceremony Tuesday for a 40,000-square-foot expansion of its plant at 15900 Sabra Way, a 48-acre campus in the Ruffin Mill Industrial Park just north of Colonial Heights.

The expansion, which will bring the plant’s total square footage to about 260,000, more than doubles the facility’s cold storage capacity, allowing for greater customization and automation capabilities that officials said would help the company provide fresher products to its retail customers.

Addressing a crowd of invitees that included county and state officials, CEO Tomer Harpaz said the expansion represents the company’s commitment to continuing to develop the facility, which opened in 2010 and expanded in 2014.

“This is exactly the type of investment we love going about, because it’s all about product creation,” he said. “This project, expanding the warehouse, will enable us to improve our service to our customers, to run operations more effectively, more efficiently, so we can allocate more resources to improving our products.”

In addition to its hummus, 100 percent of which is produced at the Chesterfield plant, Sabra’s product line includes salsa, guacamole, tzatziki, and other dips and spreads. 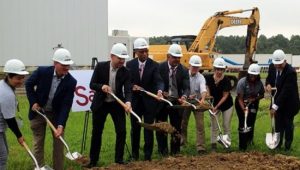 The New York-based company, owned jointly by PepsiCo and Israel-based Strauss Group, plans to add 12 full-time jobs with the expansion, which will include the addition of a 1,700-square-foot heated office area with locker rooms and restrooms for the warehouse employees.

It wasn’t clear Tuesday how much the company is spending on the expansion. Requests for a project cost were not fulfilled by press time.

Harpaz said the company has invested more than $250 million in the plant since 2009 and employs more than 700 workers there. He described the plant as the largest and most-advanced hummus-making facility in the world.

The contractor on the project is Tippmann Group, an Indiana-based firm focused on cold-storage warehouse construction. The expansion is designed to maintain the Chesterfield facility’s Gold certification under the U.S. Green Building Council’s LEED certification program.