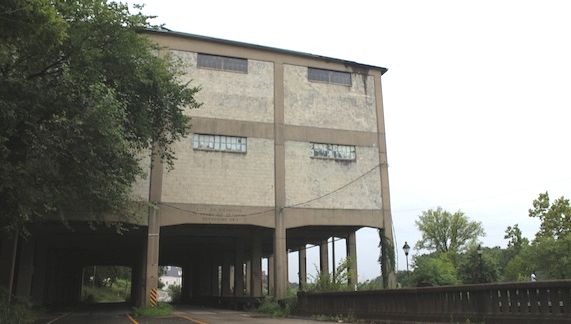 A decision handed down from the state may finally help clear a path for Stone Brewing’s planned East End bistro.

The old Intermediate Terminal Warehouse No. 3 at 3101 E. Main St. in July was deemed ineligible for historic preservation, according to the state’s Department of Historic Resources.

DHR’s conclusion likely will help remove the last major obstacle that had caused the Richmond City Council to repeatedly delay a vote on demolishing the building to make way for Stone’s World Bistro & Gardens. 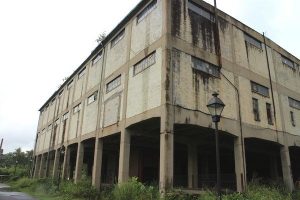 Views of the warehouse from the Virginia Capital Trail.

There had been some debate recently over whether the century-old building has historic value and should be preserved, despite the city and Stone previously finding it was structurally unfit to be redeveloped as originally planned in an agreement with the Richmond Economic Development Authority.

Stone CEO Dominic Engels said this week that the DHR finding “removes one of the last hurdles in moving this project forward.”

“We know everyone is eager to breathe new life to that area of the riverfront, and we’re ready to be a part of that effort,” Engels said.

EDA Chairman John Molster said the pending DHR decision has been part of the holdup.

“I think City Council is interested in making sure that they look at this from all angles, and that was one of the open issues when the process started,” Molster said.

DHR’s decision was sent to the city on July 6, according to a letter obtained by BizSense. 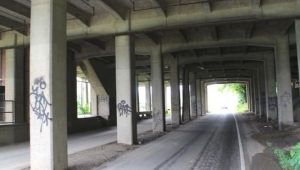 The Intermediate Terminal sits on stilts over Dock Street.

The letter noted that the building historically operated as part of a complex with two other warehouses, railroad segments and a nearby wharf. But due to the previous demolition of the other parts of the complex, DHR says “the complex has lost integrity of setting, design, materials, workmanship, feeling, and association.”

“The Executive Evaluation Committee recommends that the Intermediate Terminal Warehouse #3 is not eligible for listing in the National Register,” the letter states.

That was in line with an architectural review commissioned by the city and completed by Dutton + Associates.

The debate stems from a changing of course earlier this year by Stone and the city when they sought to demolish the building, rather than convert the existing 30,000–square-foot structure into a restaurant and beer garden as first proposed in their 2014 deal.

They claimed an analysis of the building since had found it to be structurally unsound for conversion. Stone now wants to build a new 12,000-square-foot structure, but City Council approval was needed in order to amend the language of the 2014 agreement to allow for demolition. A vote on the matter since has been delayed by council seven times in five months.

Councilwoman Kim Gray confirmed that the delay was in part due to the pending DHR decision, but she said she’s still on the fence about whether to vote in favor of demolition.

“Personally, I always err on the side of preservation,” Gray said. “I have friends that say, ‘You guys are always trying to save stuff that ain’t worth saving.’ I have to consider (DHR’s) opinion but I also think there are other opinions to weigh against that as well.”

Stone has continually voiced its commitment to opening the bistro despite the holdup, and Molster, who was on the EDA when the 2014 deal was put together, said Stone has hit or exceeded all of the marks it agreed to at its brewery at 4300 Williamsburg Ave.

The financial terms of the deal between the city and Stone will not change, as the EDA will provide $8 million in bonds to construct and own the bistro, and lease it to Stone. The lease payments over 25 years would repay the bonds.

City Council will not convene in August, and the Stone matter is listed on its Sept. 10 agenda, which currently shows the vote will be delayed for an eighth time to the Sept. 24 meeting.

While Stone was a nice addition to Richmond, I don’t feel like they’ve made a lot of friends with the cost to the city involved in landing them and now this back and forth on the tunnel building. Not the greatest entrance into a market.

No joke. They were also were supposed to renovate the old wharf building and create a bistro that had 200 jobs. The new restaurant will have less than half the square footage and just over 100 positions created. That means less tax revenue.

And I love the findings, the city tore down the old Sugar building that was in front of the intermediate terminal, building two, a couple years ago under Wilder, so the city destroyed it own histoeic integrity.

Richmond learned this lesson with the Sixth Street Market. Don’t try to cut and paste a design, or impose an image, onto our city. Why? Because Richmond already has a culture and personality and a cool vibe. Let Richmond be Richmond. True, expand on what’s here, and move forward, but allow these changes to flow organically from the existing vibe (and architecture) that’s already here. San Diego is nice. But Richmond is not San Diego and doesn’t want to be or need to. Stone needs to learn this, or they will quickly go the way of the Sixth Street Market.

This ugly heap is a crumbling eyesore that needs to go. Stop letting that wave of nostalgia blur your vision. This thing was never worth saving, and removing it is the most practical thing to do.

I work in Preservation, and my small opinion is that this would not make for a good restoration. Developers and the city need to judge whether it might be good for re-use. However, I think it looks like a pile of trash. It also appears to be an expensive demolish, so who pays for that (in the end)?