Willow Oaks Country Club has $2 million worth of renovations underway around its grounds at 6228 Forest Hill Ave. on the city’s Southside.

The work includes rebuilding the exterior of the pro shop, a new member entrance, and more than doubling the size of its patio with added fire pits and other amentities to take advantage of the river view out the clubhouse’s backdoor.

The plan also included all new interiors and new carpet in the clubhouse, gutting the tennis locker and this month the club is rebuilding its short game practice area and driving range. 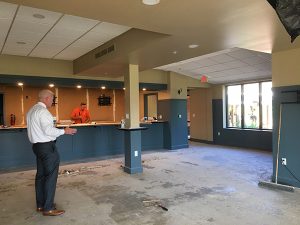 Club GM Chris Wells checks in on some of the construction.

The work is the result of an initiative approved by members last year and is being paid for in part by cash on-hand and by an extra fee members agreed to pay.

“We were getting feedback from members for improvements and did a survey to see whether they’d be willing to help fund it,” Welles said. “We had a 76 percent approval rating – that’s huge in the club business.”

The club instituted an assessment – a one-time fee that averaged around $2,000 for full members and began the work.

While the approval rating was high, Welles said they anticipated losing members who wouldn’t want to pay the fee

“We budgeted for 4-5 percent over normal attrition, but we did not see that happen,” Welles said. 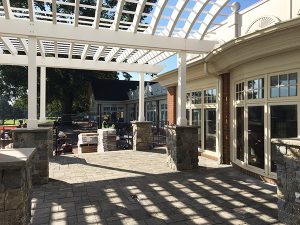 The club now has 930 family members, which is a bit off its peak in 2007, Welles said, adding that he’d like to have 30 more members. He would not disclose the cost for membership at the club.

Welles said the look and desires of the club’s members have changed in recent years.

He said members that are joining today are younger than in the past and they tend to use the club for all its amenities, rather than just for golf or just for tennis.

He said members also expect more variety in the kinds of programming offered. For example, the club is doing an outdoor adventure camp for kids, an offering that goes beyond the usual summer golf or tennis camps.

“Twenty-five years ago, the members that played golf rarely played tennis and vice versa,” Welles said. “Now it’s common for members to use all the facilities.”

The upgrades at Willow Oaks come in the midst of an unusual year for weather in the mid-Atlantic that has made maintaining golf courses a difficult task.

Extended cold weather in the early spring decimated the turf at many local courses, forcing some to buy truckloads of sod or to take more extreme measures.