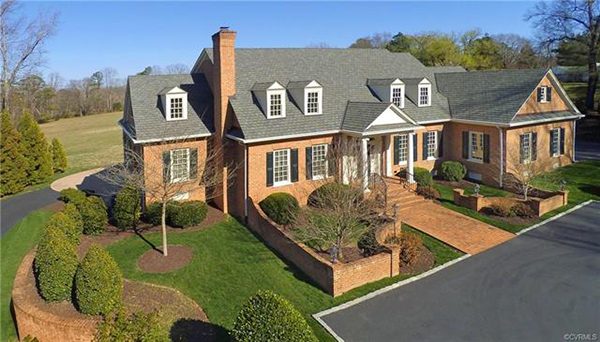 A Goochland County home on and off the market for over two years landed a buyer last month in the priciest residential transaction in the area in July.

The five-bedroom, seven-bathroom house in the Wickham Glen neighborhood off River Road initially was listed in March 2016 with a price tag of $2.45 million. After a year without a sale, the price was reduced to just below $2.3 million before it was eventually taken off-market.

Sue Farrell of Joyner Fine Properties had the listing, which most recently returned to the market this April. It was put under contract with its latest price tag in June. 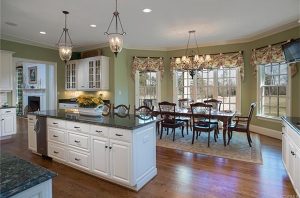 The kitchen of the home that was the highest-priced home sale in July.

County property records identify the buyer as Jeffrey Bassett, an executive with a local equipment distribution firm. He was represented by John Schultheis with Long & Foster.

The sellers were William Bishop Jr. and Inga Bishop, who had the house built in 2009 and purchased it from builder Lancaster Corp. for $2.31 million. The latest county assessment valued the 1.3-acre property at $2.07 million.

Farrell, who did not return a call seeking comment last week, told BizSense in 2016 that the couple was returning to Bill Bishop’s hometown of Birmingham, Alabama, to be closer to family. Bill Bishop retired from PricewaterhouseCoopers and served as managing partner of its Richmond office.

Schultheis would not discuss his client but described the house as impressively appointed.

“The house had beautiful trim work in it, the most elaborate trim work I think I’ve ever seen,” he said. “It was a very pretty lot, first-class brick work, loaded with expensive extras. The seller put a lot of high-dollar extras in it, which we all know you tend not to get your money back.”

“I don’t normally play in this price range. I’m a poor boy from Midlothian,” Schultheis said. “If I could do one a month like this, you’d never hear me (complain).”

The three-level house includes a 2,000-square-foot outdoor terrace with a wood-burning fireplace, and a master suite with a sitting room divided by a double-sided gas fireplace.

The home also includes a downstairs media room, billiards area, gym with adjoining bath, and four garage bays – two on the ground level near the kitchen and another pair on the lower level for guests.

The house is the latest million-dollar sale for Farrell, who sold a house down the street from the Bishops at 310 Wickham Glen Drive for $2.3 million in December. Farrell more recently sold former Treasury Secretary John Snow’s downtown condo for $1.05 million in June.

Rounding out the top five home sales for July, according to the Central Virginia Regional Multiple Listing Service: