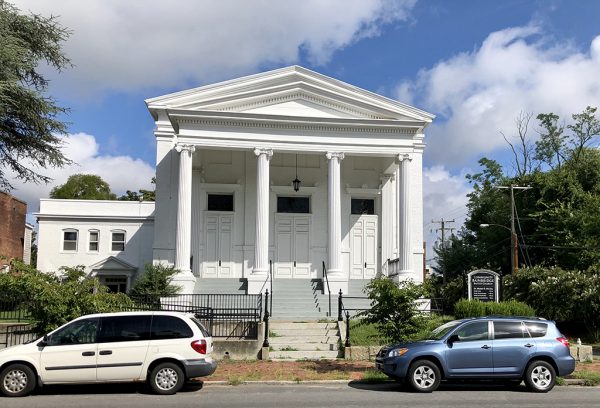 A local nonprofit’s plan to convert a Manchester church into a homeless shelter has been met with mixed reception from area residents, including some vocal dissent coming from developers who have a financial stake in the Southside neighborhood.

Jay Brown, CCC’s division director of housing services, said plans call for the Manchester site to host some of the organization’s services, primarily the cold weather overflow homeless shelter it administers for the City of Richmond, where the organization would house up to 200 people in the fall and winter.

The public safety building is also one of about 10 properties in the vicinity being eyed for redevelopment as part of the massive plan to revamp the neighborhood by replacing the Richmond Coliseum with a new arena. Mayor Levar Stoney’s office recently announced it would enter formal negotiations with the arena-development group, which is made up of investors, including Dominion Energy CEO Tom Farrell.

Brown said the Coliseum redevelopment plan is not fueling CCC’s pending deal to move to Manchester, despite calls from some who say otherwise.

“This has been a three-year process with the city in securing a location,” Brown said. “This is really about providing a better, larger location for the people that we serve … This location provides that.”

Farrell’s group, in a statement from spokesman Jeff Kelley, said: “We agree, like all Richmonders should, that a solution to the (Public Safety Building) homeless shelter needs to be found. It’s an affront to human decency. But the (coliseum) proposal is not the driving force behind it.”

In its search for a replacement facility, Brown said the agency has looked at over 30 properties across the city, from former warehouses in the Blackwell and Manchester neighborhoods to former churches and vacant commercial space across Church Hill and the Northside.

“Many of the properties we viewed weren’t cost-effective for us because of the amount of work they would need,” Brown said. “The Manchester site is in an older building that has been very well taken care of, and would need minimal work to make it move-in ready.”

The former church also includes a basement kitchen that would be a vast improvement from the Public Safety Building, where patrons have had to eat their lunches or dinners in a nearby parking lot. 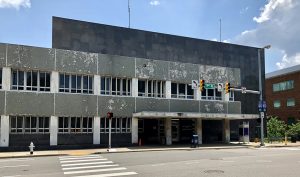 Brown said the goal is to be out of the Public Safety Building and into the Manchester facility by the start of the cold weather season, around Oct. 1.

CCC will need to obtain a special use permit for part of the Bainbridge property since it will be using the main church as a shelter and office space. Attorney Andy Condlin of Roth Jackson, along with Kathy Graziano, a consultant with Roth Jackson Strategies Group and a former City Council president, will represent CCC during the permitting process.

If CCC is not able to secure the Manchester property or gain SUP approval, Brown said the nonprofit would continue to operate out of the Public Safety Building downtown and retool its search for a new location.

The flames of debate over CCC’s plans and its connections to the Coliseum deal have been fanned in part by Michael Hild, a developer who with his wife, Laura Dyer Hild, has amassed dozens of properties around greater Manchester.

Hild argued in a recent post on his Dogtown Dish neighborhood blog that the move is largely fueled by the Coliseum redevelopment, saying, “…those shiny new plans don’t call for a homeless shelter remaining as part of the mix.”

“The City cannot simply do away with its homeless shelter. It has to find a new home,” Hild wrote. “And regardless of the benefits of having a centralized downtown facility to serve the homeless, Dominion’s Tom Farrell and the City want it out of the way.”

Hild, who would not comment directly to BizSense, further argued in his post that the city is attempting to “push the downtrodden across the river, and hoping no one will notice.”

Others in Manchester expressed their concerns last week at a community meeting held at the Bainbridge church.

The impassioned gathering drew around 200, with a mix of Manchester residents, property owners and business owners who either support the project or vehemently oppose it.

“I don’t want to take away from what your mission is because it’s all good work,” said Charlie Westbrook, a neighborhood resident who purchased and redeveloped 1309-1315 Hull St. nearby, at last week’s meeting. “But we don’t have a grocery store, we don’t have access to the type of medical facilities this operation is going to need … It’s the right idea that seems to be in the wrong place.”

Jeremy Connell, a Manchester resident and an early investor and developer in the neighborhood, said he’s concerned about the CCC facility and its impact on the neighborhood’s limited resources.

“I was happy to hear that it was not as far along into the approval process as we were led to believe,” Connell said last week after the community meeting. “This is a very large facility going into a small, mixed-use neighborhood … That’s concerning.”

In addition to the 17,000-square-foot church building that once was used as the congregation’s offices, kitchen and sanctuary, CCC’s deal also includes the neighboring two-story parsonage at 1109 Bainbridge St., and a 0.2-acre lot behind the main church building at 1100 Porter St. that houses a basketball court.

Brown said the organization is in its due diligence phase, while not disclosing the pending purchase price for the properties or when the agency hopes to close on the deal.

The three properties most recently were assessed by the city for $742,000.

Brown said the SUP process is in its early stages.

“We haven’t decided when we are going to file the SUP,” Brown said. “We still need to meet with the city and other stakeholders.” 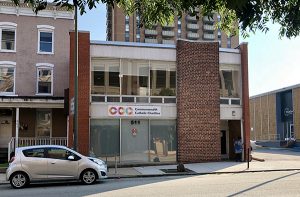 As part of the SUP process, Brown said the agency is seeking to operate the cold weather shelter from Oct. 1 through April 15. And unlike the Public Safety Building facility downtown, the Manchester shelter would be open 24 hours during those cold months. That’s a measure Brown said would prevent its users from being forced to be out in the elements during the rest of the day. During cold weather events, the public safety facility is operational from 7 p.m. to 10 a.m.

“Moving over to Manchester would allow us to keep our residents that need our services inside 24 hours, since we would now have the space to provide all of our services in one place,” Brown said.

Other parts of CCC’s operations also would be moved to the Manchester facility.

Some of the shelter operations would be moved from its headquarters at 1601 Rolling Hills Drive in the West End. Brown said several of CCC’s services at its 511 W. Grace St. location near VCU also would be moved to Manchester – with the goal of eventually moving the entire Grace Street operation south of the river.

“We’re trying to take one step at a time,” Brown said. “Once we have secured a location for our shelter operation, then we’ll make a decision about our Grace Street facility.”

The charity owns the two-story, 6,200-square-foot Grace Street building, which most recently was assessed by the city for $525,000.

And if the site is secured by CCC, the long-term goal is to develop the 1100 Porter St. and 1109 Bainbridge St. sites into transitional or low-income housing for its users.

All three parcels under contract are zoned for urban multifamily development, which allows for apartment and townhome development.

“That was what also made this site so attractive, was the idea that we could have the space to create that type of housing nearby,” Brown said.

Another point of concern at the community meeting was the neighborhood’s lagging public infrastructure, lack of efficient access to employment centers and medical facilities, and no full-scale grocery store. Others were concerned about loitering, the number of people staying at the shelter and their duration of stay.

Brown, along with other CCC staff, said while the overflow shelter is proposed to be operational 24 hours, the agency has proven successful in finding permanent housing solutions for its patrons.

“The average stay time is about 11 days,” Brown said. “The programs we administer have been successful in helping us find permanent shelter for our residents, whether that be an apartment or with a permanent shelter.”

Other comments were aimed at city officials, with some attendees questioning whether the city was purposely redlining the neighborhood for low-income housing and residents.

Despite some calls for CCC to abandon its Manchester plans, others welcomed the idea of having such a facility in the neighborhood, which is one of the city’s most economically diverse.

“You may never know if you’ll be in need of them, or someone in the family may need their services,” said Rev. Robert Winfree of New Life Deliverance Tabernacle Church.

Councilwoman Ellen Robertson, whose Sixth District includes the Manchester neighborhood, encouraged residents not to cave into nimbyism, adding that she would be monitoring the SUP’s progress.

Oddly enough, the City has as much at risk with this proposal as any other player. Hundreds of millions of dollars of real estate has been developed in Manchester of the past ten years and much of that is nearing or at the end of the tax abatement period. The City has been banking on this “note” to mature. Dropping 300 (not 200!) homeless on the streets of Manchester is putting that investment at severe risk. If the City allows this proposal to go forward, it will be doing to Manchester’s tax base what the canines did to the Manchester… Read more »

I strongly disagree with you Bruce. I can understand why people would be hesitant to have homeless folks in their “backyard”, but the fact of the matter is that we are a city with over 25% of our population living in poverty. Many of these 25% are a step away from homelessness. These are children, women, elderly folks, sick folks, vulnerable people who are still human beings and deserve a chance of decency and hope. To address the few dissenting arguments, outside of nimbyism: 1) Tax abatement: the city has issued hundreds of these ACROSS the entire city. All of… Read more »

Ashley you made some very strong and valid points. As you mentioned the city is getting screwed by the Redskins for that training facility which only brought in a fraction of the economic boom as promised. We must take care of our citizens. No location is ideal, however it is better than having women and children sleeping outside the Richmond Convention center and downtown broad st.

Ashley, your point appears to be that the Manchester District needs to step up and share the pain of poverty and homelessness. You probably aren’t aware that the it currently hosts a homeless shelter and Caritas, as well as more than its share of poverty and low income housing. Manchester feels it is doing its share and its willing to continue to help. Its the sheer size and location in the heart of a residential district that is the objection. Literally, this church building is in the middle of a housing district that has been fighting and clawing its way… Read more »

Update for all; shelter plan in Manchester is dead (and Coliseum deal on-life support).