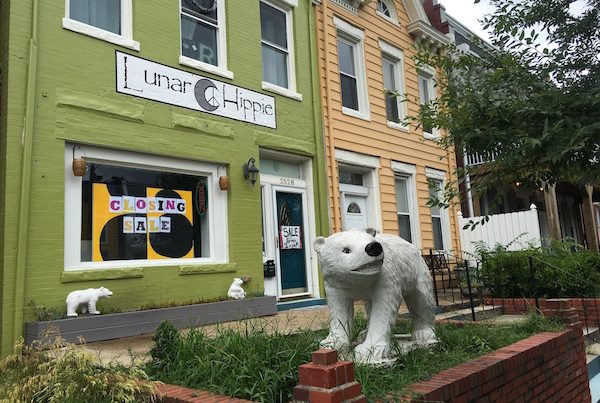 The search is on for a new tenant for a prime Fan retail space – and whoever moves in will just have to get used to the bear.

Lunar Hippie, which sells clothing, accessories and décor from its storefront at 2528 W. Main St., is preparing to close up shop.

Owner Barbara Pasnak said she’s shutting down because she and her husband, Kevin Offutt, are preparing to move and have kids. The shop is set to close at the end of August.

“I’m selling everything I own to move to the Gulf Coast of Florida because my level of crazy is unmatched,” Pasnak said, laughing. 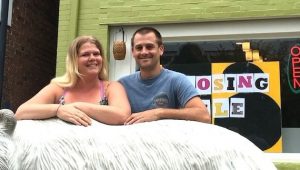 Launched by Pasnak in 2011 under the name Terra Gypsy, Lunar Hippie is known for the large polar bear sculpture posted outside its front door near West Main and North Robinson streets. The bear will not be making the move to the Sunshine State.

“The polar bear is staying; it comes with the building,” Pasnak said.

Lunar Hippie came into possession of the bear, which does not have a name, on Christmas Eve 2014, when its original owner down the street was preparing to get rid of it.

“(The bear was) kind of across the street and down a few houses. I believe it was originally an HVAC firm or something that had it put in a long, long time ago,” Offutt said. “And they were annoyed because people were drinking, partying and playing on the polar bear and it was their front yard.”

When word spread the former owners were fed up and prepared to have the bear destroyed with a jackhammer, Offutt and Pasnak welcomed it onto their stoop.

“It was crazy. We had to pay to get the street shut down and have a crane move it over,” Offutt said.

Pasnak’s family owns the roughly 1,900-square-foot building, which also has an apartment upstairs. She said Hometown Realty’s Christian Brock will be listing the building for sale.

“People keep asking about whether we’ll keep the store or the online store going in Florida,” she said. “But I’m not sure … I’m just so thankful people loved our store.”

Lunar Hippie is located just a few doors down from Holy Chic and Co., a nail salon that opened in June at 2510 W. Main St.

Meanwhile on the west side of North Robinson, Starlite Dining & Lounge announced it will be closing Sept. 1 at 2600 W. Main St. but will reopen as an offshoot of Rueger Restaurant Group’s Lunch and Supper concept.

Congratulations and best of luck. This place will be missed <3

Thank you! We will miss you too! Keep being awesome 🙂