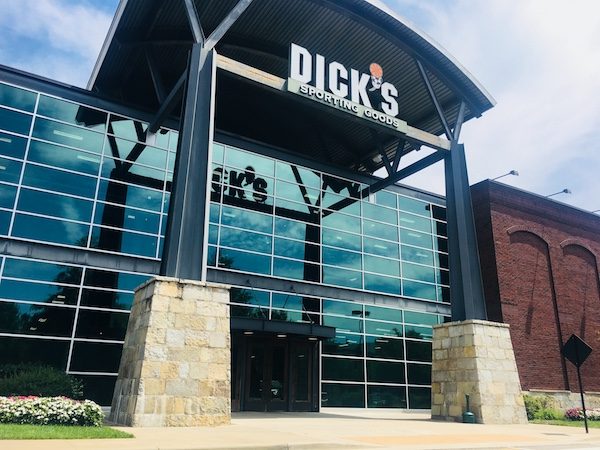 Correction: An earlier version of this story incorrectly reported that Dick’s was an original tenant at Stony Point. Its store was originally a Galyans location, a chain that was eventually acquired by Dick’s.

A Southside mall is about to lose one of its anchor tenants.

Dick’s Sporting Goods will close its store in Stony Point Fashion Park next month, according to multiple store employees.

Dick’s spokeswoman Arielle Claypool confirmed that the store will be closing but did not provide any further details.

The closure will come about two months after the publicly traded retailer opened a newly built store in Willow Lawn. It has five additional locations in the region at Short Pump Town Center, Hancock Village, North Chesterfield, Colonial Heights and on Brook Road near Virginia Center Commons.

Dick’s is one of four anchors at Stony Point, along with CineBistro, Dillard’s and Saks Fifth Avenue. The two-level store opened with the mall in 2003 as a Galyans location, a chain that was acquired by Dick’s in 2004.

Stony Point was sold to Starwood Retail Partners in 2014 for over $70 million. The center is in the midst of a multiphase, $50 million renovation project.

Starwood did not return requests for comment by press time.

The mall has seen its share of churn recently, including openings and closings.

Dick’s was not an original tenant. Dick’s stores were around and they acquired Gaylan’s in 2004. Gaylan opened with the mall in 2003.

Dick’s wasn’t one of the mall’s original anchors. That location was a Galyan’s when it opened in 2003, Dick’s acquired the chain in 2004. Dick’s also has a location in Glen Allen.

The Dick’s closing has nothing to do with the opening of a new store at Willow Lawn. It has to do with the end of a 15 year lease, and the probability that sales didn’t support an extension.

Willow lawn, the phoenix. Born stronger to defeat its adversaries.

Does the Dick’s location near Chesterfield Towne Center not qualify as one of their additional area stores? Feeling overlooked on the Midlothian corridor.

I believe that’s the North Chesterfield location mentioned in the article, isn’t it?

Ouch! Stony Point has really been an interesting property to watch as malls have had to evolve if they want to survive.

A toy store would be a great replacement. We have two young kids, and the demise of Toys R Us has left gaping hole in the hearts and minds of every kid we know. Buying toys on line just doesn’t cut it. Kids love the experience of going to the toy store. It’s a magical wonderland to them.

It would be nice because I used to love going there but unfortunately brick and mortar toy stores just aren’t financially viable anymore just like music stores. Sure there are the niche shops like Plan 9 but the days of Camelot, Peaches, The Wall, are gone just like Toys R Us and KB Toys.

I really think Stony Point needs to consider moving to more of a true mixture of uses. Their office market seems to be pretty good and the apartments seem to be doing well. Why not tear this box down and put in an office or apartment building of 5 or six stories? Forget putting apartments along the perimeter. Integrate them as more a true town center. It would instantly bring more life than the Dick’s ever did. Look at this as an opportunity and not something bad.

David, when I lived in North Austin, they redeveloped a similar outdoor mall and converted it to a town center/shopping complex called The Domain. It’s been wildly successful. The street level has a mix of storefronts like Shake Shack, Loft, Apple Store, Banana Republic, Nordstrom, a Westin Hotel, and even Dick’s. Immediately above most of the stores are 4-6 story apartments. The entire complex is navigated with one way streets and sidewalks, so it truly feels like it’s own town. Between 5,000 and 7,500 people now live there. Granted, there are maybe 5 markets that can compare to Austin, so… Read more »

Stony Point is like watching a slow motion train collision that is also drowning in 1000′ of ocean. The Mexican joint it had 10 years ago was awesome. And it just sits vacant?? How can they lose both a Starbucks and a chipolte? That has to be a commercial real estate record nationwide. Those are the only two fast food places I know where my coworkers go on a daily basis, every day. Yet this place can’t keep them occupied? I bet stony point could cause a Chick-fil-A to close down if one was there. The $50 million reno, to… Read more »

David – an option to mix it up is a hotel – the footprint is the right size and it would complement both the office park and the restaurants / movie theater.

Fred – I agree with most everything you said – except about those “crappy modern benches” – they are actually cast concrete with heating elements inside – and they’re $8k each (https://galanterandjones.com) – try them this winter and you will want a set for your patio…

The bench by itself i am sure is a great piece, and yes on my patio would be awesome My thoughts were just why change the furniture to a modern look when the mall isn’t? Also the benches need butts to fill them, and most people don’t equate open air malls to let’s go sit outside in the winter. I think the renovation is a giant waste of $, delaying the inevitable. If only they speant the $50 mil to lower rents and keep current tenants or attract newer tenants. Suit stores, and false window displays in half of one… Read more »

I get your comments about the renovations – a friend of mine made a keen observation in 2003 when it opened – there are people everywhere, but no one is carrying shopping bags.

It is telling that the $50M renovation includes a cut through from the Chippenham side to the rear parking lot – with the primary benefit being that it will create 4 corner units to lease to restaurants. Seeing that this plan is 2+ years old and yet to break ground, there must be hesitation from the owners…

@William – I’m not a CRE expert by any stretch of the imagination, but I just don’t see that as a good location for a hotel. It’s not that close to the interstate, it isn’t near the airport, it isn’t in a walkable urban area, it probably wouldn’t be an option for a budget traveler, the office park isn’t very big…I’m just not seeing it as a good location for someone who is staying in town for a night or two, whether it be for pleasure or work. I do think that apartments there would be an attractive to a… Read more »

There are no rooms close that I can think of.. With the medical offices in the area, they may work! Heading north along Chippenham/Parham I think the closest hotel is Broad Street/Short Pump. Heading south I think it’s Midlothian Turnpike.

Nothing on Forest Hill, Huguenot, River, Patterson, Regency Square or at I-64.

The location of this mall is bizarre, at best…Location, location, location and this one fails on most levels. The developers could not have selected a more obscure corner of the city to hide this mall. I’m surprised it has survived this long. I tend to agree that The $50 million renovation will prove to be a waste of money-just prolonging the inevitable failure of this property.

@ Zach – I am also not a CRE expert, but in 2018 big box retail is dead as fried chicken, so what else can take that size of a footprint? There are already 2 apartment complexes in Stony Point and the closest nexus of hotels are Midlothian Turnpike, Broad & Glenside, and Short Pump – all while this site would be closer to The Boulders & U of R . It’s not ideal for a hotel property, but it could fill a gap in coverage and provide evening foot traffic that this mall needs. @ Kay – on paper,… Read more »

It’s awfully hard to be profitable when you’re in an overly upscale mall with very limited access from the surrounding neighborhood. This really doesn’t surprise me at all. If the mall had better access from roads other than Chippenham Parkway (Huguenot Road? There’s also a gated access road leading to Cherokee Road…), it might be healthier than it is.

I believe its a combo of the lease expiring and the fact that Dick’s is seeing a huge profit decline in part by UA, gun, and ammo sales. Most of their decline is self-inflicted with poor acquisitions and market strategies.