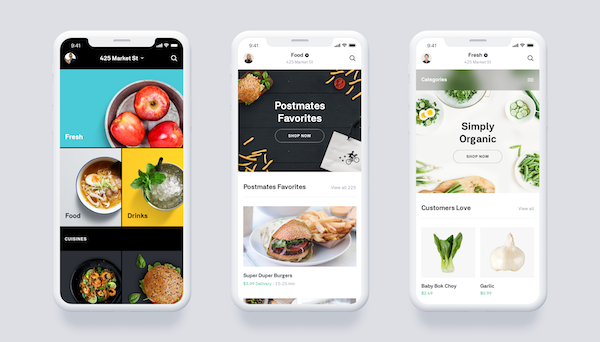 Another national delivery startup has entered the Richmond market.

Postmates, a San Francisco-based company that uses a network of on-demand drivers to deliver anything from takeout food to groceries to toiletries, launched in Richmond last week.

Spokeswoman April Conyers confirmed that Postmates formally began service in Richmond on Aug. 22. It is currently available only in the city, though it may expand its local delivery radius in the future.

“We’ll usually start in a city’s hub or near a university, and then expand as demand increases,” Conyers said.

Postmates users place orders through its mobile app or website, and all deliveries cost a flat rate of either $4 or $6.

Though its logo bears a bicycle courier, Postmates’ deliverers use cars. (Courtesy of Postmates)

“Postmates allows you to get anything from anywhere,” Conyers said. “Whether it’s dinner for your family, lunch at the office or cough medicine because you don’t feel good enough to go outside … basically we are your extra pair of hands.”

“We used to charge based on distance but a little over a year ago, we changed to flat rate to make it simpler,” Conyers said.

Postmates also has a subscription service available at $7-$10 a month that allows for free delivery on all orders over $20.

Drivers are paid a calculated rate per delivery completed as well as mileage and time spent.

The Richmond launch is part of Postmates’ recent nationwide expansion. The company rolled out around 100 new cities about a month ago.

“Richmond has been on the list for a while. We look at the amount of people who open the app in each city and the overall feel of the city, like the types of restaurants and merchants,” Conyers said.

Since its founding in 2011, Postmates has raised $278 million in venture capital, per startup database Crunchbase. It operates in over 385 cities.

In Richmond, it enters a competitive market, particularly for food delivery.

This year, local startup Chop Chop RVA and national service DoorDash launched in Richmond. UberEats, EatStreet, GrubHub and Seamless have been operating in Richmond for years as well.

Chop Chop is horrible. I got the post cards this spring and decided to try. Load the app and look at the menus. Cary Street Cafe menu does not list any of its sandwiches, The font headings are also different for each category. For Tarrant’s listing, instead of lunch, dinner and brunch main headings you have headings of “Entree-Seafood, Brunch Specialities, Benedicts, Omlets, Lunch App, Dinner Meats, Catering Entree, Catering, Wings, Sandwiches”……the layout is confusing. Entree Seafood is lunch only; for dinner you look at Dinner-Seafood. I tried delivery one night Greek on at 6:30 pm from Greek on Cary… Read more »

Aren’t you forgetting Quickness RVA? Founded in 2010 and still going strong. Local, faster and more eco-friendly than any of the others you mentioned!