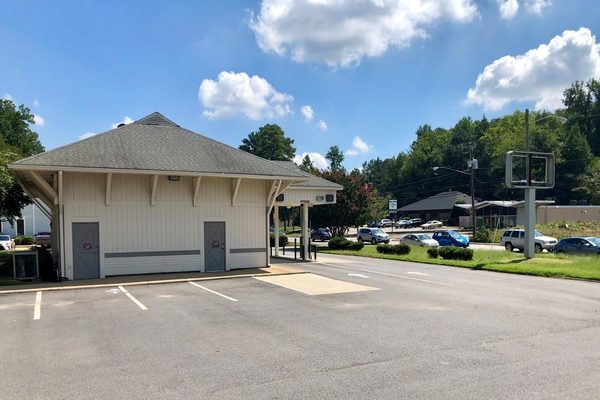 Starbucks plans to construct a new store with a drive-thru on the site of the former BB&T Bank branch at 6980 Forest Hill Ave. (J. Elias O’Neal)

A vacant Southside bank branch likely will soon have a date with the wrecking ball, as a national coffee chain that already has two locations across the street looks to move in.

Starbucks has filed plans to construct a nearly 2,600-square-foot location on the site of the former BB&T branch at 6980 Forest Hill Ave.

Plans call for the existing bank building to be razed and a new Starbucks store to rise in its place with patio space and a drive-thru, according to a plan of development filed with the city.

Starbucks operates several locations in the area, including a store in the Shops at Stratford Hills at 7017 Forest Hill Ave. and inside the Target store in the shopping center — across the street from the former BB&T bank branch.

It’s unclear whether the planned store would replace one of the chain’s two nearby spots. Starbucks did not respond to an email for comment Wednesday afternoon.

Preston Lloyd, an attorney with Richmond-based Williams Mullen representing Harper Associates, the owner of the Shops at Stratford Hills, said his client has not received an official notice to vacate from Starbucks.

However, Cushman & Wakefield | Thalhimer, which handles leasing in the center, has the existing Starbucks site for lease, according to a marketing brochure.

BB&T closed the Forest Hill branch in December 2017 and the property was purchased promptly by Verdad Real Estate, a Texas firm that develops single-tenant sites for national restaurant chains, including Hardees, Starbucks and Taco Bell.

Why not utilize the existing bank building, complete with a drive-through, for the new Starbucks like they did at Regency Square with the old Bank of America?

Excellent question especially considering I believe that it one of the older RVA Richmond and Danville RR train stations that was re-purposed years ago by F&M Bank. If it is 125 plus year old train station building will be leveled instead of reused for what will be a 20 year max CMU constructed retail space.

I believe it is a replica station. The passenger car that used to be there is now in Goshen, VA last I heard.