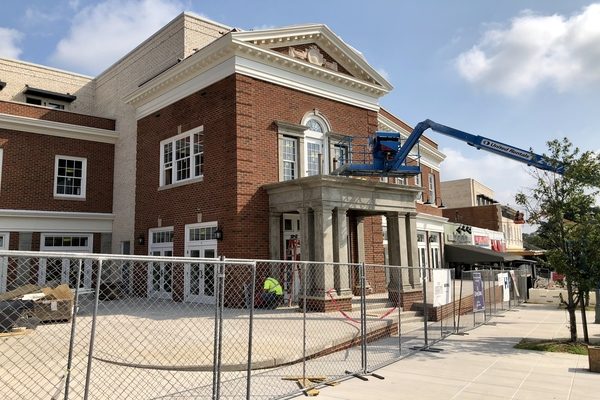 Taste Unlimited is set to open its first Richmond outpost in 6,000 square feet at the Westhampton on Grove mixed-use development in the West End. (J. Elias O’Neal)

A Hampton Roads-based restaurant known for its sandwiches and salads is preparing to roll out its first Richmond location next month.

Taste, a regional chain based in Virginia Beach, plans to open in mid-October in the Westhampton on Grove, the two-building mixed-use project underway at 5702 and 5706 Grove Ave. in the city’s West End. Taste will be the first business to open there.

It will be the brand’s first location outside of Hampton Roads and will take over 6,000 square feet of ground-floor retail space in the development that will seat 176 patrons inside and on a wrap-around patio.

Taste President Jon Pruden said the company has been eyeing a Richmond location for five years.

“We have a number of people from Richmond that have second homes or have visited our location in Virginia Beach,” Pruden said during a tour of the Westhampton space Thursday morning. “Many kept asking when we were going to put a location in Richmond.” 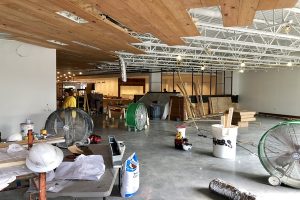 That opportunity came when he was approached about a year ago by Jason Guillot and Stefan Cametas, developers of the Westhampton on Grove project.

“We tend to set up in buildings that have a lot of character,” Pruden said. “Westhampton was an old theater, and when it was decided that they could not refurbish the site back into a theater and it would be redeveloped into a mixed-use project, we were immediately interested.”

Once open in Richmond, Taste will have nine outposts, with its other locations scattered throughout Virginia Beach, Norfolk, Chesapeake, Newport News and Suffolk. The group also operates a Borjo Coffeehouse in Norfolk’s Lamberts Point section.

While Pruden would not disclose the amount of investment in its Richmond location, he said Taste is looking to hire about 40 full- and part-time workers there.

Pruden said the food menu in Richmond will mirror those from its spots in Hampton Roads.

“The same sandwiches and salads you get at our locations in Virginia Beach they will get here in Richmond,” he said.

The Richmond store also will include the “Drink Bar,” which will serve a variety of beers and wine, smoothies, kombucha and its Borjo Coffee that’s roasted in Gloucester County.

It also houses The Pantry, a shop that will sell Virginia-crafted products, such as Virginia-grown peanuts and almonds, Taste’s signature dressing, a variety of cheeses, wine and beer, jams and jellies.

“We want to work with local crafters of goods and foods to carry their items in our store here and in Hampton Roads,” Pruden said. “Selling other goods made locally is a very important part of what we do, and helps drive the customer experience at our locations.”

A quarterly art rotation is also in store, Pruden said, with its first artist exhibition belonging to Dick Fowlkes, owner and operator of Peter Blair, a men’s clothing boutique on Grove Avenue.

For patrons on the go, Pruden said the outpost also will include premade sandwiches and salads.

Pre-made to-go items will be available, as will delivery within a 6-mile radius. And Taste plans to expand its catering services to the Richmond area, Pruden said. 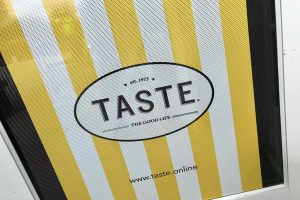 Once open in Richmond, Taste will have nine outposts in Virginia. (J. Elias O’Neal)

For now, Pruden said Taste’s Westhampton location will be its lone location in Richmond.

“We’ve been presented with some opportunities to look at some other locations,” Pruden said. “But at this time we have no further plans to expand in the Richmond area. It’s important for us to be able to maintain our quality of foods and service.”

A 2,500-square-foot office space on the second floor is all that remains available from 31,000 square feet of commercial space in the mixed-use project.

Cametas added the three residential condo units, which range from 3,000 to 4,300 square feet, also have received interest, with two of the units reserved for potential buyers.

Love the Va Beach location. Been waiting for a Richmond location for at least 4 years….Looking forward to the opening!! Can’t happen soon enough!

Had no idea they were coming to Richmond. I’ve been to their Newport News location a couple of times and the food was amazing.

… And it’s a super energy efficient Polycrete building. No fear of tornadoes in this structure, either. Its walls withstand up to 250 mph winds. If you live in this neighborhood, next time a tornado’s coming, run over to Taste and get a salad.

Bruce, do you guys at Polycrete guarantee that the windows, doors and roof will also stay up?

As President of Polycrete, perhaps you could just buy advertising, or at least post your affiliation.

Hi Matt! Windows, doors, and roof design are the responsibility of the architect and structural engineer. In this case, the reinforced concrete roof is poured into the walls creating a massive monolithic structure. Did you see the concrete block buildings in Chesterfield that were leveled by last week’s F2 twister? What a mess.

Yes I did. Up close. I just wish you would clarify your posts with at least an acknowledgement that you are connected, and not use a recent tragedy (including a death) to promote your product. It just seems inappropriate to me.

Thanks, Matt! All you have to do is click on my name at the head of the post and you can find out all about PolycreteUSA. The editors of Richmond Bizsense have designed it that way. It’s a business oriented website/magazine. You can link your website to your profile as well. It’s easy!

Can’t wait to dine in that restaurant! I have always loved the food there!