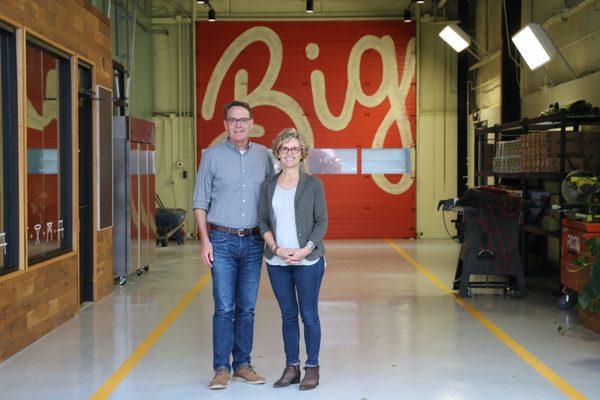 There’s a dining experience of a different sort headed for Scott’s Addition this fall.

The founders of local restaurant chain Tazza Kitchen are launching The Big Kitchen, which will offer prepared meals for customers to heat up at home, through both delivery and pickup at 1600 Altamont Ave. They aim to open in mid-November.

“We’re all busy, we all have families and we love to eat good food with our families, but we don’t always have time to cook,” said co-founder Susan Davenport. “Even though we work in the restaurant business, we still get home and open the fridge, and think, ‘What are we going to have for dinner?’”

Davenport said the meals aren’t kits, like those offered by popular cook-at-home delivery services such as Blue Apron. Rather, The Big Kitchen meals will be made fresh daily using the same suppliers as Tazza Kitchen, such as Bow Tied Farms and Caromont Cheese.

“We’re really looking at things that travel well and reheat easily,” said John Davenport, Susan’s husband and co-founder. “We want it to be as convenient as possible.

Located in a former diesel repair shop, The Big Kitchen will retain the industrial aesthetic of Scott’s Addition. Customers will have the option to pick up inside the garage to receive their meals to go along with beer and wine after ordering online. Customers will be able to see the smokers where meats are smoked in house as well as peek into the kitchen with the chefs at work. They’ll also have the delivery option.

“Really it’s just something that we are missing in our life, honestly,” John said. “We got more serious about how do we get good food in homes, and do it conveniently and affordably. It will be the same sort of food we’d expect in our restaurants or if we made it ourselves.”

The Davenports founded Tazza Kitchen with partners Jeff Grant and John Haggai. They now have three Tazza locations in the Richmond area and three in the Carolinas. They recently put both the Tazza and Big Kitchen brands under their newly created umbrella company, Big Kitchen Hospitality.

While the concept of delivery or carry-out-and-cook-yourself meals is not new nationally, The Big Kitchen is something new to Richmond.

San Francisco-based The Munchery, which also delivers ready-to-reheat dinners in compostable packing, once operated in New York City, Seattle, and Los Angeles, before refocusing operations solely in its home city this May. There was also New York City-based Maple, founded by restaurateur David Chang, which ceased operations in summer 2017.

Mid-November will mark one year since the idea for the project began. The company will participate in Richmond’s annual Fire Flour Fork festival and aims to officially open the following week. The company has a 15-year lease on the building. According to Davenport, the cost of development to get the Big Kitchen ready has been close to $1 million.

In August, Executive Chef Danielle Goodreau was brought on to work on a menu for The Big Kitchen and Tazza Kitchen. Menu items and prices will be set later.

Susan Davenport anticipates a learning curve as the new company establishes itself, but research is already underway and pilot tests of meals will be done throughout October. She said customer feedback and engagement will be crucial. Some Big Kitchen recipes have already been tested at the Short Pump Tazza Kitchen location, and some Tazza staples will be available through The Big Kitchen.

“There’s a lot of logistics between the online ordering, the delivery, and the fulfillment of the meals,” Davenport said. “There’s really nothing really like this in Richmond.”

Note: This story has been revised to remove references to a drive-thru component to The Big Kitchen. Because it will sell alcohol, meals ordered from the site will be required to be picked up outside of vehicles, in accordance with ABC rules.

This is so exciting and every busy person’s dream come true! Serving my family yummy, non-fast-food meals, is always a challenge, so this will be a huge help. Thank you, Susan and John!

We need a Tazza Kitchen in the booming Woodlake /360 West area of Midlothian. Many hungry people here and lots of new strip centers going up. We have plenty of fast casual – we need good casual. Please feed us!