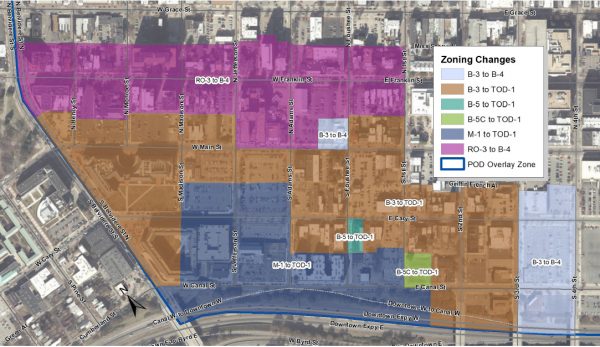 The city intends to rezone several properties in Monroe Ward, the part of downtown between Belvidere and Ninth streets, and south of West Broad Street to the Downtown Expressway. (Maps courtesy of Richmond Planning & Development Review)

The Richmond Planning Commission today is set to take action declaring the city’s intent to rezone several properties in Monroe Ward, the part of downtown between Belvidere and Ninth streets, and south of West Broad Street to the Downtown Expressway.

Existing zoning, which includes light industrial and auto-oriented commercial classifications, would be consolidated to create just two zoning districts: B-4, the business zoning that already covers much of the ward; and TOD-1, the “transit-oriented nodal district” that the city last year applied at Scott’s Addition, primarily along Broad Street and the Boulevard.

The changes would allow for taller building heights and encourage development that could replace the ward’s abundance of surface parking lots. The TOD-1 district generally would fill the ward’s southwest quarter, from Main Street southward and Third Street westward, while the rest of the neighborhood would be zoned B-4. 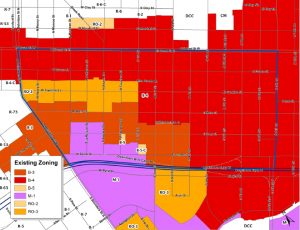 The recommendations, which have been months in the making, stem from the city’s Pulse Corridor Plan, which was adopted in conjunction with the redesign of Broad Street to accommodate the GRTC Pulse, the bus rapid transit line that started running this year. The same plan produced the recommendations that resulted in the Scott’s Addition-area zoning changes that City Council adopted last year.

Further driving the changes is building activity on both ends of Monroe Ward, in both the central business district and VCU’s Monroe Park campus, according to documents that planning staff submitted to the commission.

“While Monroe Ward is home to an array of historic structures, there are also a significant number of surface parking lots, several of which take up entire blocks,” a staff report states. “This proactive rezoning process is in order to ensure that new development is in keeping with the principles of the Pulse Plan.”

Those principles call for dense, mixed-use development that blends housing, employment and entertainment in the area of each Pulse station, walking and cycling options, historic preservation and general connectivity. The plan also encourages urban design elements such as smaller setbacks between buildings and streets, variety in building facades and screened parking. 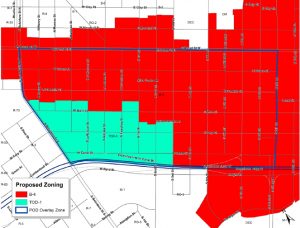 The changes would allow for taller building heights and encourage development.

The changes would include the creation of an overlay zone specific to Monroe Ward that the city would use in reviewing development plans. While the existing B-4 zoning district has no height restrictions, the city is looking to remove the current four-to-one ratio, “inclined plane” method related to building design, which allows for a structure to go up 4 feet for every 1 foot in width.

TOD-1 restricts heights to 12 stories. There are 12 buildings in the neighborhood higher than six stories.

Neither zoning district allows surface parking lots as a principle use, meaning parking would need to be incorporated into developments beyond street parking availability. Parking decks are allowed with the required screening.

The focus on Monroe Ward adds to other efforts in the region to update zoning in conjunction with mass transit and transit-oriented development – a topic area administrators and developers discussed at a Richmond BizSense panel event last week.

In neighboring Henrico County, where GRTC bus service recently was expanded, county planners are reviewing zoning in an area just west of Scott’s Addition – an industrial corridor west of Westwood Avenue that administrators have referred to as “Scott’s Addition 2.0.”

Bring on the height! Let’s get tall! Let’s put building’s on existing surface lots. Modern cities do not have the number of surface lots we find in Richmond.

I was just in Chicago. The architecture there is amazing. Small buildings have come down in favor of newer taller ones with interesting public spaces and setbacks from the street. RIchmond, a much older city in years, is way, way behind in style and uses.

Another sample of how NOT to do public business. And I like the idea (height, protect historic homes, and get rid of surface lots) but we are in the middle of a Master Plan update. You update your Master Plan and determine what the residents want THEN you revise your zoning. This is backwards and smacks of a city administration that either thinks of the Master Plan as a nuisance or a waste of time.

And in practice many of our surface lots were created by developers who only got partway to their dream of realizing modern tall buildings. They cleared out the old but didn’t get to the new. The 500 block of E Main is a glaring example.

I live in the Fan. When I worked downtown I rode the bus to and from work everyday. The company I work for moved to the far west end (approximately 15 miles away). There is no bus service there so I need my car to get there. I cannot ride a motorized scooter 30 miles! The city can eliminate every last parking space, block off roads, and do their damnedest to shame motorists but I, like many city residents, will still have to have my car because there are no practical transportation alternatives. Eliminating parking and traffic lanes will substantially… Read more »

We could also just drop all minimum off-street parking requirements.

The existing and proposed districts have no parking requirements, except for hotel and some residential uses. The market, and typically the lender, dictate that parking be provided. The office towers in downtown have a zero parking requirement, but those corporations did not follow the code, they provided it for themselves anyway. Unfortunately, we’ve ended up with blank walls or open parking decks and driveways on many of our streets; just look at the north side of East Cary Street between 6th & 10th Streets as one glaring example.

All of this is ok but what about parking for all this new proposed development? Is there any type of proposed parking that has to come with building all these new buildings over parking lots – or is such parking just going to be put on the street and crowd city streets further? Also I think the city leaders should look at the long-term growth in the city (is it sustainable) before zoning changes brings in all new development. After all – if we hit a bursting bubble in the economy, it could lead to lots of empty buildings, additional… Read more »

The city is looking to remove parking in this area, not provide more. We need more people using public transit/walking/biking in this area. It’s the center of the city and pretty easy to get around. Lets promote LESS car use not more.

I believe residences would need parking, but commercial uses would not in this district. The market will take care of a lot of that as it has in other parts of downtown. Parking decks can replace parking fields pretty easily, which then frees up the rest of the parking field for development. New development could also be built on top of parking structures as they are doing all over the downtown area. No one is going to build an office building without parking. Developers may only care about the bottom line in many cases, but because of that ones that… Read more »