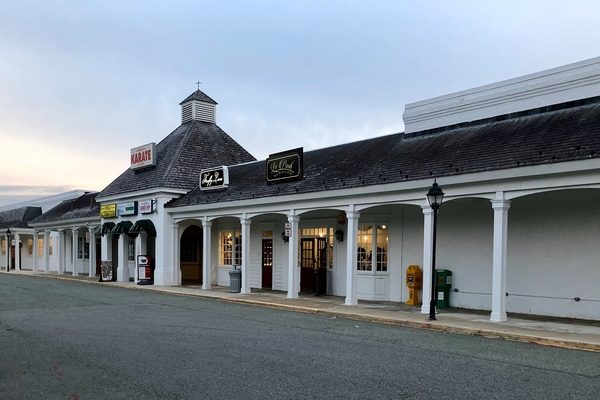 Much of the Huguenot Village Shopping Center will be redeveloped to accommodate a Publix grocery store. (J. Elias O’Neal)

A Florida-based chain is looking to take another bite out of the Richmond grocery market with yet another new-construction store in Chesterfield.

Publix is planning to build a 50,000-square-foot store in the Huguenot Village Shopping Center at 2001 Huguenot Road at the intersection of Huguenot and Robious roads.

While a plan of development filed with the county on Oct. 12 does not specify Publix as the tenant for the planned building, sources familiar with the project confirmed the chain will be the new anchor for the shopping center.

The plans also show that Publix’s arrival would usher in other major changes at Huguenot Village.

Much of the main 94,000-square-foot shopping center will be razed to accommodate Publix, plans show, with the exception of the 24,000-square-foot Williams & Sherrill Interiors space, and several outparcels that house Firestone Tire, Starbucks, Outback Steakhouse and Sheetz.

About 4,200 square feet of retail would be added between Williams & Sherrill and the proposed grocery store. 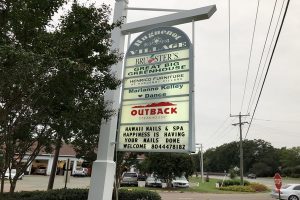 The new store also would include a drive-thru pharmacy and the reconfiguration of the parking lot to accommodate more than 200 vehicles.

The site will be heavily landscaped with a large buffer area between it and the Axis147 apartments, which will include a walking trail connecting the residential area to the store.

A 15,000-square-foot strip retail center also is being proposed between Dave’s Auto Spa and the Bruster’s along Robious Road. However, those plans were filed separately from the grocery store last summer.

Publix did not immediately return a call for comment Tuesday afternoon.

The project is being developed by Raleigh-based Harris Development Partners, which has built several Publix outposts throughout the mid-Atlantic. Richmond-based Freeman Morgan Architects is designing the store, while Kimley Horn is listed as the civil engineer.

Prior to the site plan submittal, Huguenot Village had about 11,300 square feet available for lease, according to a property marketing brochure.

Luring Publix to Huguenot Village brings more competition to a sector of the county that boasts some of the highest per-capita incomes in the region, along with surging traffic counts.

Nearby, Kroger operates a store at 3001 Polo Parkway in the Shoppes at Bellgrade, and Aldi recently opened a location at 1670 Mall Drive. Other area grocers include Fresh Market, Lidl, Costco and Wegmans.

Publix has wasted no time in its quest to grab a slice of the region’s competitive market share.

While I am happy to see that there will be an injection of new life into this area, I am sad that the <3 years old former Martin's site on Charter Colony Pkwy remains empty. There's no need to start from scratch when there is a perfectly good space available very close by. Additionally the former Martin's sites at Midlothian Village and Stony Point would also be good proximal choices.

There is the Martins building by kohls on midlothian too why not use that or the one on charter colony that was also a Martins. Sometime I wonder who is coming up with this, crazy!

The issue with the Midlothian Turnpike location is that the building is settling very badly. It was built on unstable fly ash fill. I think the issue with Charter Colony is price and it’s a little bit bigger than the stores Publix has been opening.

Will Weaver
Reply to  David McGrann

Yikes, settling would be a very good reason not to use a building. That explains why that space doesn’t have a new tenant by now…

Alexandra Suder
Reply to  Will Weaver

Are they going to tear the settling buildings down?

BIll Davis
Reply to  Will Weaver

That’s why Ukrop’s had to remodel it on the fly. Was working for them when they happened-not at that store but knew what was happening. The building had cracks in foundation, etc. So they had to do some serious work on it. I’m sure Publix doesn’t want that headache. As for Charter Colony, that was announced to have been bought in Jan 2019 and last time I was on Southside to get my new contacts, signs were up at both Charter Colony and Robious.

It’s all about the landlords and developers. If they can’t make the deal work, it won’t happen.

I’m all for this. Huguenot Village is more or less on life support and needs to be redeveloped.

However, I do admit that the Martin’s building on Midlothian Turnpike might be worth considering as well. That building was more or less brand new when Martin’s pulled out of the region, and has been vacant ever since. It’s also in a prime location for development and would be a good alternative if this project somehow fell through. (It’d also help space out Publix’ locations somewhat, since Huguenot Village is relatively close to the Stratford Hills location.)

Michael Dodson
Reply to  Will Weaver

My thoughts too it is VERY, VERY close to Stafford Hills. What 10 min drive? However the location is central at the Robious and Huguenot intersection that allows a shopper say in Settlers Landing or Tarrington to avoid Midlothian Tnpke. It does seem closer to the neighborhood. I will be surprised if the new Charter Colony store price does not fall and Publix steps up. This is what happened at Stafford Hills.

I do love Publix, but why destroy so many shops at Huguenot Village when there is a perfectly good empty store across from Chesterfield Towne Center, where Martin’s used to be. My vet happens to be in the Huguenot Village shopping center. I hate for him to have to move–and even if the doesn’t, the parking will become atrocious!

Regarding atrocious parking, are you referring to the average number of open parking spots? Or are you referring to having to walk 100, 200 or 300 feet rather than 50 feet? Or some other issue? Regarding the first, a full parking lot is much better for the health of a shopping center than an empty one. Empty enough, and everyone closes. If the latter, walking a few extra feet is not a problem for most people, and a modernized shopping center should have accommodations for those who need to park closer to the shops.

I’m happy to hear that more development is coming to Huguenot Village. When we lived in both Manchester & Carytown, the Huguenot / Robious corridor was much easier to get to than Short Pump and had most of the same stores we needed. Since we moved to Stony Point 5 years ago, we have been happy to see so many quality additions to the area – Mellow Mushroom, Cava, Sugar Shack / Luther, Aldi, Lidl, etc. For those of us on the south side of the city, having the convenience of the suburbs within 5 miles is a real plus…… Read more »