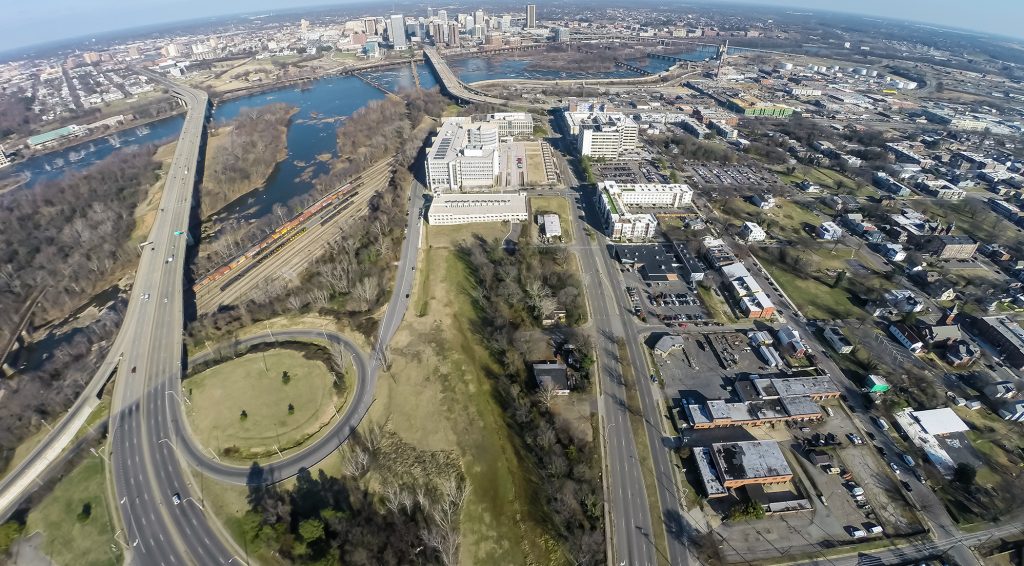 The plot that’s under contract is to the left in the foreground. Courtesy of Colliers International.

An Alabama-based developer that’s pushing for hundreds of apartments in Chesterfield now has its sights set on the city, where it’s looking to deliver one of the largest multifamily projects in Manchester in recent memory.

LIV Development is proposing a seven-building, 289-unit community on 15 contiguous parcels totaling about 7.3 acres near the Lee Bridge at 1400 Railroad Ave.

The site sits next door to SunTrust’s mortgage headquarters campus, and overlooks one of south Richmond’s busiest intersections at Semmes and Cowardin avenues.

LIV is under contract to purchase the acreage. Much of it – about 6.1 acres across 11 of the parcels – is owned by prolific Manchester developers Robin Miller and Dan Gecker, and their firm, Urban Development Associates. The remaining 1.2 acres is owned by a trust belonging to Lewis Ginter Botanical Garden.

A sales price for the properties was not disclosed. Miller and Gecker listed their share of the property nearly three years ago with an $8 million asking price.

Urban Development Associates acquired the parcels in 2006 as part of a large land deal with the Virginia Museum of Fine Arts.

The 15 parcels most recently were assessed by the city at a combined $8 million, according to property records.

Miller and Gecker, along with Lewis Ginter Botanical Garden, could not be reached for comment Friday afternoon.

Michael Ramsey, LIV’s director of development, could not immediately be reached for comment.

Plans on file with the city show the existing site will be scrapped, including doing away with two garage-like structures, several trees and asphalt slabs.

In its place would rise seven buildings, including a five-story apartment building constructed over a podium to allow for 56 parking spaces below, two four-story apartment buildings that would front mostly West 14th Street, and four rows of three-story townhome buildings totaling 15 units that would border the development with frontage and access along Railroad Avenue and West 13th Street.

The project is called Riverview Apartments, according to the plans.

In addition to a gated surface lot within the site, complex amenities would include a pool, clubhouse/leasing office, 15 garages attached to the townhomes, a fitness center and a co-working office area for residents, according to the plans.

Buying into Manchester would give LIV is second sizable project in the region. The Birmingham-based company has proposed a 305-unit apartment complex near the intersection of Cosby and Otterdale roads in Chesterfield’s Woodlake area. The county board of supervisors is set to vote on the plans at its Oct. 24 meeting.

LIV’s other holdings consist of apartment communities in several metros in the Carolinas, Tennessee, Georgia, Alabama and Texas.

Manchester’s 2nd biggest riverfront acreage gets a makeover! There seems to be no end to growth there.

Where is the retail component fronting Semmes? This needs to be a mixed use project. The neighborhood wants commercial uses along Semmes Avenue in Manchester.

The site deserves much better…5 story wood apartments, no attention to Semmes? Satirical commentary: Is this seriously all the diverse leadership group at LIV can come up with? http://livdev.com/leadership/

Quite honestly I have always hoped for something more than 5 stories here. There are multiple properties in Manchester that have gone well above 5 stories and I would think with the views this property would have are a prime opportunity to go higher. If they don’t think the market has the ability to absorb more than that many units now why not build only a portion of the property at this time.

I’m curious to see how the entrance to the facility will work, that area seems like it has the making of a traffic nightmare.

Actually this looks to have pretty accessibility. From the map above it looks like there is a turning lane in the median at Semmes and 13th, plus it will have full access to Railroad Avenue. Plus 14th will be extended too. Not sure what more you could want beside a every side being a huge road, but then no one would be able to leave except by car.

Manchester is Richmond’s showcase for cheaply-built, 5-story apartment buildings. I hope these unambitious structures have sprinklers.