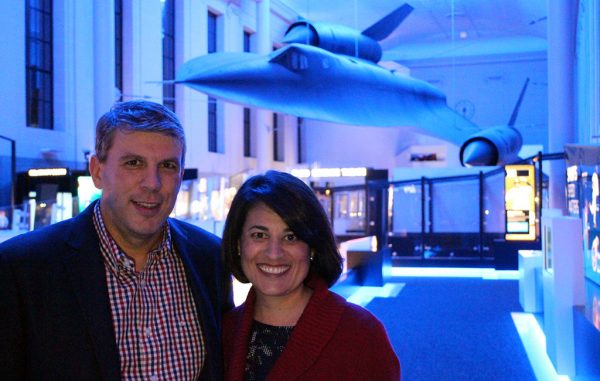 Fuel Creative’s Todd and Pam Hervey in front of the SR-71 Blackbird at the Science Museum of Virginia. (Jonathan Spiers)

A homegrown documentary starring the model SR-71 Blackbird at the Science Museum of Virginia is spreading its wings with national exposure.

“Blackbird: Legacy of Innovation,” the film by Richmond-based Fuel Creative’s Todd and Pam Hervey that premiered last November at the museum and since has aired on WCVE-TV, has been picked up by 267 public television stations across the country that plan to air it at some point in the next three years.

Those stations’ collective reach means that the documentary will be viewable to just over 84 percent of the U.S. population, said John Felton, who led the effort as WCVE’s vice president and general manager.

Felton said the film was offered to a national public TV distributor with the understanding that a national contract would require at least 25 stations to agree to pick it up.

With 10 times that voting “yes” to the film, Felton said, “It clearly crossed that threshold.”

“My national budget to market this to the other PBS stations was nothing,” Felton said. “The program spoke for itself.” 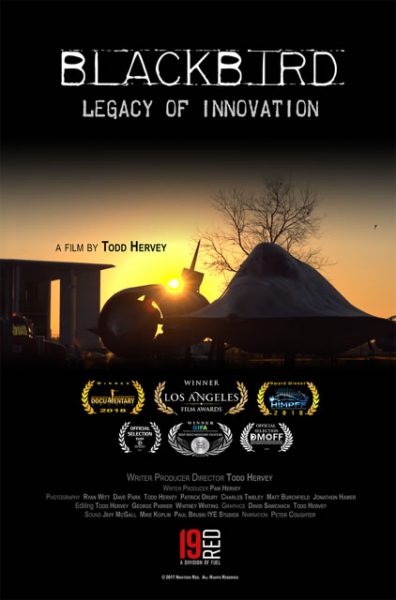 The poster for the film.

Helping with that effort was a mention on a cover of the print newsletter for American Public Television, the national syndicator signed on to distribute the film.

For the Herveys, who self-funded the film as co-producers, the reception is icing on the cake of what’s been a whirlwind year since the film’s local premiere, which came two years after Todd started filming what he initially envisioned as a documentary of the model plane’s relocation for the now-closed Virginia Aviation Museum to inside the science museum building on West Broad Street.

The nearly hour-long film evolved to also cover not only the aircraft’s history and development in the 1960s but also – cue the title – its legacy in American technology and innovation.

“I’m really lucky,” Todd said. “It’s created other possibilities, and it became much bigger than I hoped.

“To have something get that big, a lot of it is also because of the existing Blackbird community. It’s Elon Musk’s favorite plane.”

Felton said the Herveys, who had rented studio space at WVCE for their Shockoe Bottom-based video production firm, were not seeking distribution or national exposure. But Felton knew the film had traction.

“It became apparent to me that this was something that we could put out there, and I was of the opinion that it would easily break 25 stations,” Felton said. “What really was the key thing about this particular documentary is it wasn’t just a story about the SR-71 Blackbird; it was a story of technology and innovation. The SR-71 is 60-year-old technology, yet today, it’s still the fastest plane in the world.

“It takes a look at not only the merits of the SR-71 and how incredible it is, but it also ties in the story of where are we at in America in terms of innovation and are we losing a little bit of ground,” he said. “So it really resonated on several levels: plane enthusiasts, innovation, technology.”

The film also gives a co-starring role to the science museum, which is featured prominently throughout in clips that document the model’s reassembly and suspension inside the building. Having hosted the premiere and still hosting the film’s star, the museum now shows an abbreviated version of the documentary daily, said museum director Rich Conti.

“The biggest question we get about the plane in the building is, ‘Is it real?’” Conti said. “So when they can see a piece that really goes into the history of it and helps them understand it better, that’s just great that we have that depth. Then they want to know, ‘How’d you get that thing in here?’ Once you see the piece, you can crack the code on that.” 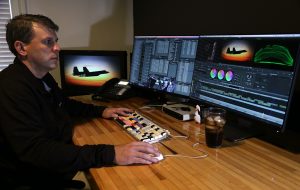 For the Herveys, the film’s success is providing a track record they can point to for future projects. While they said they received sponsorship interest from Lockheed Martin, the aerospace and defense company that developed the Blackbird, the couple stayed true to their decision to fund the project themselves with no underwriting or outside influence.

“Getting picked up by that many stations really helps the next time I do something, trying to get it underwritten first like you normally would, but now being able to say the last one we did reached this many homes,” he said.

Added Pam: “We love the idea of continuing to create content and things that are our own ideas. There’s a lot of really great stories that are Virginia-based that should be told. This Blackbird documentary has opened that door for us.”

While the film is not currently on WCVE’s schedule, and air dates on other stations are at their discretion, Felton said he expects the film to air again locally after the holidays. It first aired in March.

Pam stressed the role WCVE has played in the film’s success, adding they look forward to future collaborations. Based on the Herveys’ first go at public TV, Felton said he likes their odds.

“I’m hoping and expecting to be working with the Herveys on future projects TBA,” Felton said. “We’ve got our eyes on them.”

I don’t understand why you’re calling it a “Model.” You know it’s a real airplane that flew, has its own records, and to get it in there is a story in itself, right?

From Merriam-Webster’s online dictionary:
An example for imitation or emulation. For example – His written addresses are models of clearness, logical order, and style.

I’d disagree with Sean Roche’s comment at 2:26 in the above clip. Not everyone who worked on the Blackbird are gone–I and many others are still here. Perhaps he meant all who designed it are gone…