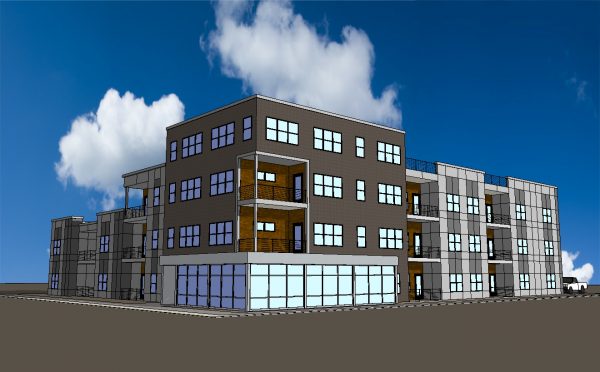 A rendering of the four-story, 19-unit condo project to 901 Porter St. in Manchester. (Submitted)

A group focused on the cohousing trend has a site in mind and a veteran developer on board to help it bring the concept to Richmond.

The building will have privately owned condos ranging from one to three-bedrooms, each with a full kitchen. Staying true to the mission of cohousing, the building’s design will be centered on a common area that includes a kitchen, dining and meeting area, as well as a play area for children. The space can be utilized for planned and spontaneous gatherings and interactions.

“We have a shared intention to live collaboratively and you do that through building design,” said Karl Zweerink, Richmond Cohousing member. “The fact that the common area will be accessible through the entrance to the building will encourage interaction between residents and reduce the isolation a lot of living arrangements can create.”

Cohousing has caught on around the country and cohousing associations have formed in several midsized and large U.S. cities.

“Cohousing is not a new concept, but there’s a recognition that as our lives get busier, it’s been harder and harder for people to stay connected with their neighbors,” Zweerink said.

Cohousing can take many forms, including a college dorm-like experience, where tenants can lease rooms in larger shared apartments with communal kitchens, common areas and bathrooms.

“You find different communities operating under different models,” Zweerink said. “For us it’s private ownership but lots of common areas.”

Richmond Cohousing approached Miller & Associates, which owns the lots along Porter and West 9th streets that make up the project’s half-acre site, about six years ago, principal Robin Miller said.

“We have been working off and on with the group,” Miller said. “And they reached out to us again six or eight months ago. Coincidentally, we had already started planning a market-rate 19-unit condominium project on that site. We had just begun our conceptual planning when they approached us, so we said, ‘We’ve got this site. Let’s make it work.’”

They held regular meetings to create a plan.

Miller said the zoning is R63, which allows for one dwelling unit for every 1,000 square feet of land.

“That’s where the 19 came from,” Miller said of the unit count.

Project plans are being submitted for city approval, and he hopes to break ground in March 2019. Bruce Shirley of Apex Designs is the architect. Miller & Associates has worked with Shirley’s company before.

Richmond Cohousing members will retain private ownership of their condos and contribute to a cohousing association fee, similar to homeowner associations. That money helps to maintain the shared common spaces.

Zweerink said the group has about a dozen full-member households and another 12-20 provisional memberships. Provisional members are those who are in the midst of the multistep joining process. They attend the cohousing group’s meetings but cannot yet vote on proposed actions.

Members of Richmond Cohousing range in age, which Zweerink sees as beneficial to the community. He said it’s easier for seniors and middle-aged families to purchase a unit due to the realities of home ownership than it is for young singles or couples.

“We are glad to have several younger families in our community and anticipate more as the word gets out about the opportunities of cohousing,” Zweerink said.

He said most members are interested in taking advantage of the 901 Porter Street opportunity. Full members have paid a $400 joining fee and a $2,000 capital contribution that goes towards the purchase of their unit.

Miller said the building will be built to be environmentally friendly, which is one of Richmond Cohousing’s values.

The 901 Porter Street project is near attractions such as the T-Pott bridge; Brown’s Island, where festivals are held; and Legend Brewery.

“We hope members can bike or walk to work and that the footprint is environmentally friendly,” Zweerink said.

However, there will be plenty to do together right at home.

“The idea is that right now, we’ve agreed to share three meals a week,” Zweerink said. “Rotating through, you’ll be responsible for cooking once or twice a month, but all the other occasions you just show up and eat, and enjoy the company of others.”

The group hopes to have a rooftop garden as well.

For utilities, people will have their own power bills and will share the expenses of the common areas, such as power, heating and cooling.

As Richmond Cohousing progresses on this project, it keeps a watchful eye on future proposals.

“Some people in the group want us to try to develop this model for an affordable housing community because that’s an important value for this group,” Zweerink said.

Richmond Cohousing supports its sister group in town, Piedmont Ecovillage, which aims for a more agricultural-minded cohousing community in Powhatan County. Piedmont member Darryl Cocks said the group is awaiting approval of an updated county comprehensive plan that could then allow it to coordinate an ecovillage mixed-use zoning plan. He said the group is holding off on purchasing land until it knows which areas will have the appropriate zoning.

A new day and another new housing concept for Manchester. Robin mentioned the concept to me last Spring and said he was entertaining it as an option, but he’s come a long way to be committed to it at this time. It’s communal feature is very interesting. Many of the new apartments are designed to attract the residents to common areas and away from their private lives but the structure of co housing makes the interaction a responsibility rather than an option. Let’s hope it works; we need more personal interaction.

Bruce and others this is not co-housing. Co-housing means normal parts of unit is shared among owners. I bet each unit will have its own washer/drier included in it. Every unit will have its own kitchen, bathroom, and PRIVATE balcony! It is more than having to three shared meals a week (which I doubt will be enforceable). Each unit is stand alone and you will not have to share any part of the common space. In any condo the common space utilities will be paid by the association. Adding LOTS of extra condo association controlled common access amenities like commercial… Read more »

Michael, I have been a member of this group for 3 and 1/2 years and intend to live there. I have visited many co-housing communities, attended a national conference as well as done extensive reading from many resources. We have on-board one of the primary Cohousing consultants in the country, Katie McCammat, who would highly disagree with your assessment of our project. Co-housing takes many forms, but most importantly private unit dwellings with shared common space for dining together, kid’s space, guest room(s), some shared green space (ours is a roof top garden) are the most common features. If the… Read more »

What’s environmentally friendly about vinyl siding? This project is nothing but a silly gimmick.

Where does it say vinyl siding?

Diana, what are LEED standards?