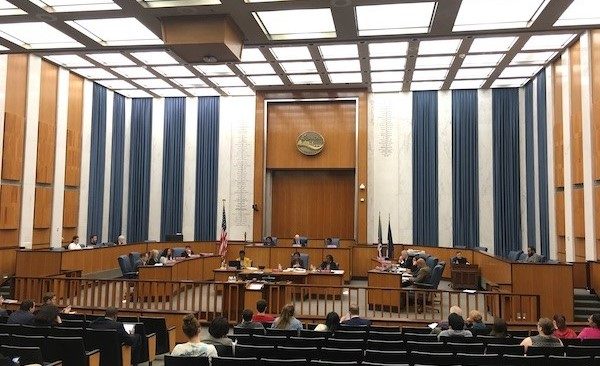 Many of City Council’s agenda items were continued to a later date. (Mike Platania)

The council vote came a week after the city’s Planning Commission recommended approval of the SUP. Dogtown, plans for which were announced last year, is slated to open in the former Thalhimers department store.

Also passing muster with council Tuesday night was special use request by Scott’s Addition shuffleboard bar Tang & Biscuit to operate as a nightclub at its venue at 3406 W. Moore St. The designation allows it operate later hours.

The Dogtown and Tang & Biscuit ordinances were part of Council’s consent agenda, which includes items that are considered non-controversial.

Meanwhile, a pair of projects on Brook Road and a potential name change for one of the city’s central arteries will have to wait a bit longer before seeing a council vote.

Council delayed voting on an ordinance that would prohibit new bike lanes from being built along Brood Road between Azalea Avenue and West Charity Street. The ordinance, which was patroned by council president Chris Hilbert and councilwoman Kim Gray, has been polarizing among city residents.

Lastly, Council delayed a vote that would rename the Boulevard to Arthur Ashe Boulevard.

The delay was anticipated after Gray, who patroned the ordinance, asked for a 60-delay on the matter at last month’s Land Use, Housing and Transportation Standing Committee meeting.

The Boulevard ordinance is now set to be heard at council’s Jan. 19 meeting, while the Northside ordinances will be heard on Dec. 10.

Also of note, there’s a new sit down restaurant in Manchester in the Westbrook’s building across from the Dogtowne Brewery featuring pulled pork and brews. Things are slowly but steadily improving in that district.