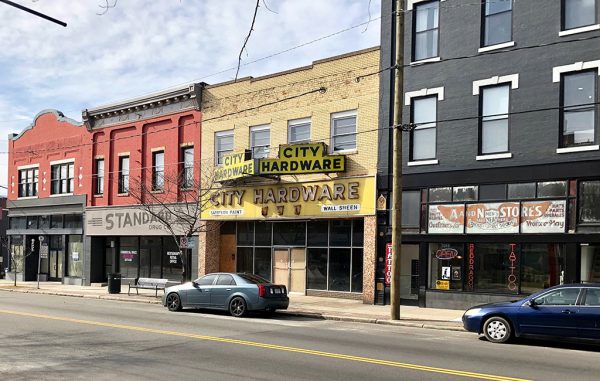 Two seasoned Richmond developers are teaming up to tackle the latest rehab along the main drag of Old Town Manchester.

Jeremy Connell’s Pareto LLC and The Monument Cos. are working to redevelop the old City Hardware building at 1317 Hull St.

Connell, whose projects include the 7West townhome complex that’s rising along West Seventh Street, purchased the vacant, 8,000-square-foot building in December 2017 for $250,000. It most recently was assessed by the city for $143,000.

Plans call for the nearly 100-year-old structure to be redeveloped into a mixed-use building that includes nine apartments and about 1,000 square feet of ground-level retail.

Construction is slated to begin during the first quarter of 2019, Connell said, with the units being delivered for occupancy by summer 2019.

Connell said the units would be a mix of one- and two-bedroom apartments. He said rental rates haven’t been set.

Virginia Credit Union is financing the project, which Connell said would involve historic tax credits. A cost estimate for the project was not shared.

Monument Cos. is set to oversee much of the project, including its development and construction. Richmond-based Michael Pellis Architecture is designing the project. Monument’s property management arm, Legend Property Group, will maintain and lease the property.

The City Hardware building is the latest dormant structure in Old Town Manchester to draw in developer interest.

Michael Hild and Laura Dyer Hild, through their Church Hill Ventures LLC, have several ventures in the works in buildings they’re redeveloping along Hull Street, including Manastoh Brewing in the old Bank of Commerce & Trust building at 1128 Hull St., Dogtown Brewing Co. at 1209 Hull St., and the Butterbean Market and Café at 1213 Hull St.

RJ Smith Cos. completed renovations to its buildings at 1319 and 1321 Hull St. about a year ago. And local investor/developer Charlie Westbrook, who is also a broker with One South Commercial, is ushering in a new wave of tenants at his redeveloped buildings at 1309-1315 Hull St., including Pig And Brew, which opened last week. Work on Brewer’s Waffles, a new concept for Anthony “A.J.” Brewer, is underway at 1309 and 1311 Hull St.

The City Hardware project adds to Connell’s Hull Street portfolio. He developed the Manchester Pie Factory building at 612 Hull St. in 2010 and sold it to New York-based MJP Acquisitions for $2.15 million in 2016.

Monument Cos. is likely to soon have another claim in the vicinity, as it and The Edison Co. are under contract to purchase and redevelop the former Muse Buick car dealership property at 1400 Semmes Ave.

I’m glad to see Jeremy continue to build in Manchester. He takes a lot of pride in his work. This building was the last holdout among several I marketed years ago but the seller stuck it out for a higher number while continuing his use of the space as a cabinet shop. It’s re-adaptive use will now fit the character of the block. Manchester continues its churn! It’s becoming a charming community.

Oh the days when the chickens of hardware store owner roamed free along Hull Street around the store (1990s). Kudos to Jeremy and his team as I know they will do a great job on the renovation.