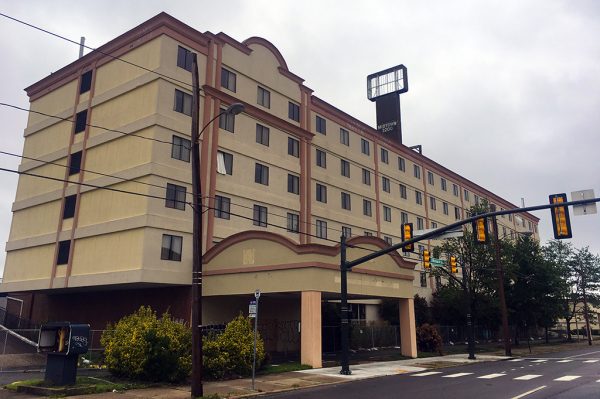 A sizable chunk of Scott’s Addition real estate once stuck in legal limbo is now in the hands of new owners who are planning a $70 million mixed-use project for the site.

Developers Louis Salomonsky and David White closed Friday on their purchase of the former Quality Inn & Suites property at 3200 W. Broad St. Salomonsky said the purchase price, which had yet to be recorded, was approximately $8 million.

The 3.5-acre property, which fills a city block, includes the now-shuttered six-story hotel building along Broad Street. The property most recently was assessed for about $11 million, according to city records.

Salomonsky and White, who run Shockoe Bottom-based Historic Housing, are planning to overhaul the site with a $70 million redevelopment that includes 322 primarily market-rate apartments, commercial space and a parking deck. 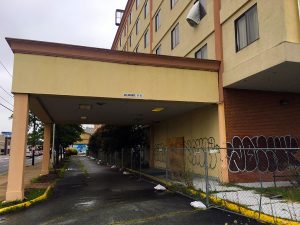 The building will be redeveloped to include new apartments and commercial space. (Mike Platania)

Plans call for the existing building to be redeveloped to include 30,000 square feet of ground-level commercial space that Salomonsky said would extend to the sidewalk along Broad Street.

The remaining five stories would be converted into 117 apartments, mostly one-bedroom units.

“About 100 of those spaces we’re looking at making public to help address the need for more parking in the area, and to help the businesses nearby,” Salomonsky said.

Salomonsky said 15 percent of the apartments will have rents targeted to low-income tenants. He said rental rates for the project have yet to be set.

Work on the site is slated to start in January, he said. Salomonsky’s SWA Architects is designing the project. Historic Housing’s construction arm also would be involved, but Salomonsky said a general contractor has yet to be selected.

Securing the site ends months of negotiations between Salomonsky and White and Richmond-based Better Housing Coalition, which purchased the property in September 2016 for $5.9 million with plans to redevelop it into a $42 million mixed-use development with income-based housing.

After settling a lawsuit this year with local developer Dominion Diversified Real Estate Group, which had alleged the nonprofit stole its idea to redevelop the building, BHC put the property up for sale. Salomonsky and White put it under contract this summer. 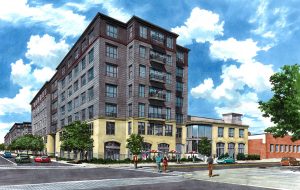 A rendering of the Scott’s View development. (SWA Architects)

The purchase adds to Salomonsky and White’s holdings in the rapidly changing neighborhood.

A couple blocks away, they are in the midst of constructing Scott’s View, a pair of residential towers with commercial street frontage on 2.5 acres at 1400 Roseneath Road. Those towers are planned to house 350 apartments with monthly rents starting at $1,100 for a larger one-bedroom unit, and about 25,000 square feet of ground-floor commercial space.

This development will completely remake the ugliest building on Broad into one of the finest and officially launch the corridor into the future. Twelve stories of apartments serviced by street level retail and a significant garage for 500 cars all at the Pulse station. This is what weve been waiting to see!
Congrats to my Colliers colleagues and John Jay Schwartz for putting together this long awaited development.

Ugliest is being kind; it will be so nice to see activity along that block and not the old hotel curtains blowing out the open windows. Keeping the lower height building on the front with a taller tower behind, to me, helps keep the Broad Street streetscape proportional.