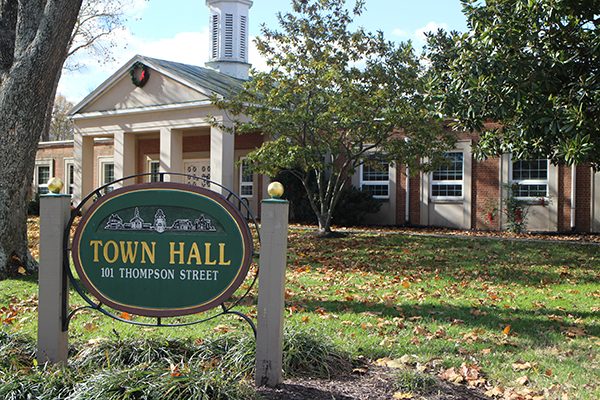 The current town hall is no longer large enough to accommodate the entire staff. (Charlotte Woods)

On Nov. 11, Ashland put out a call for contractor bids for the construction of a new town hall, demolition of the existing town hall and creation of a new farmers market.

The new 17,000-square-foot building would rise on the lot at Duncan and Thompson streets in downtown Ashland that currently hosts the town’s weekly farmers market. Then, its existing town hall – a former jail that was built in the 1950s – would be demolished to make way for a parking lot and space for a new farmers market.

“The farmers market will be in front of us instead of behind us,” said Wanda Cornwell, assistant town manager. 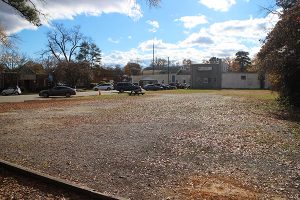 The gravel lot behind the current town hall , which has hosted a farmer’s market, is where the new facilities will be built. (Charlotte Woods)

Cornwell said the plan is expected to happen in phases. Phase one consists of construction of the new two-floor building. Phase two would be to raze the current town hall at 101 Thompson St.

The town hired PMA Architecture to develop plans that will guide contractors, who will be announced after the holidays.

Construction is anticipated to begin in spring 2019 and be complete by fall 2020. In the meantime, Cornwell said the farmers market will be held at Henry Clay Elementary School, located a quarter-mile away at 310 S. James St.

The original closing date for construction bids was Dec. 18, but it is now tentatively going to close on Jan. 10.

“There were a lot of questions coming in from contractors,” Cornwell said. “We want everyone to have all of the information they need.”

Cornwell said the idea for a new town hall building, which will bring the town government under one roof, had been circulating for a couple of years. Operations and employees have been split between 6,700 square feet in the 101 Thompson St. location and about 6,000 square feet in an old firehouse at 201 Duncan St.

Cornwell said the town also had conducted a study and determined that it could cost more to bring the current town hall up to code than to start fresh. 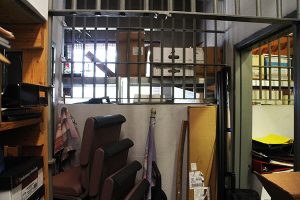 The jail cells in the town hall have been used for storage since the building no longer operates as a jail. (Charlotte Woods)

“She’s a beautiful old building, but she’s lacking in efficiencies like HVAC,” Cornwell said of the current building. “We’ve had a lot of leakage in the last year.”

The existing building has served a variety of functions through the years as Ashland has grown.

Remnants of the town’s past, jail cells in the current town hall now serve as storage space.

Of the anticipated new building, Cornwell is looking forward to a fresh look and “gathering space for the community.”