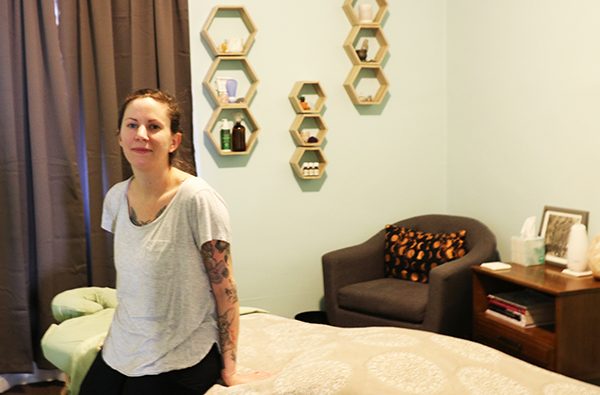 Jesse Waller operates her massage and doula business out of Carytown’s Pride Inside. (Charlotte Woods)

After years of working on the administrative side of the massage industry, Jesse Waller has struck out on her own in Carytown.

Waller recently began offering massage and doula services at Pride Inside, a space for businesses that cater to the LGBTQ community at 3026A W. Cary St., between the Thai Diner Too restaurant and the clothing store Clover.

“I don’t know if I would say my aim is to be primarily serving gender and sexual minorities. I’m absolutely open to all,” Waller said. “However, those special populations are particularly communities I’d like to serve.”

Waller said she likes operating at Pride Inside because of how vulnerable she said massages can make some people feel.

“To be blunt about it, you’re going to take off your clothes and that stranger is going to touch you. You have to have trust with them,” Waller said.

She said that members of the transgender community may be at various stages of gender transition and she takes that into consideration during massages.

“I think the average person already feels vulnerable and then, you add all those factors on top of it, and I think that a lot of people just wouldn’t get a massage if they had to be faced with all of that,” Waller said. “So knowing this is a space where you don’t have to worry about those factors and you know you’ll be accepted for who you are, that takes some weight off of it.”

Waller earned her training and certifications just days before giving birth to her daughter. Waller is married to fellow small business owner Abby Waller, who creates jams and salsas that can be found at farmers markets under the name Dayum This Is My Jam.

Waller said she became inspired to begin practicing massage therapy through her interactions with customers at Massage Envy, where she has worked for a decade as director of operations and more recently shifted to massage training and development coordinator, in addition to starting her own practice in Carytown.

“Seeing them come in with different conditions or needs and seeing how the therapy was affecting them made me think, ‘I want to do this,’” Waller said.

In addition to working with members of the LGBTQ community, Waller is interested in working with pregnant women and mothers.

I have dreamed aloud about such businesses in Richmond and been told it would never happen . I hope that this business becomes an overnight success !!!