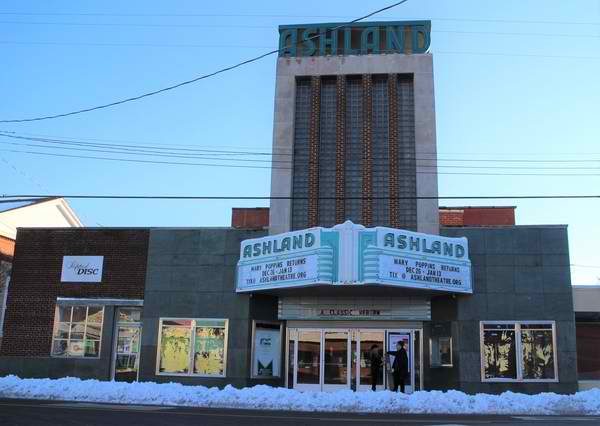 After a $2.1 million capital campaign and nearly two years of renovation efforts, an Art Deco gem in the heart of Ashland is set to reopen Dec. 26.

The restored Ashland Theatre at 205 England St. that day will show “Mary Poppins Returns,” a new film. But plans for the 70-year-old building go beyond movies, as a collaboration with Broadberry Entertainment Group is expected to provide live theater performances, stand-up comedy and music performances.

Joyce helped set up the foundation and serves as vice president of the operating board. In January, producer and artistic director Douglas Love was hired as CEO to help lead the project to completion.

“We basically gutted this place,” Love said of the site’s new layout, with an expanded lobby and larger concession stand. “We wanted to preserve some of the beauty of our 70-year-old marquee. We knew that design was going to survive and we used it in our logo.” 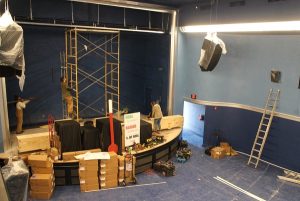 A view from the balcony. Final touches are underway ahead of the Dec 26 opening. (Charlotte Woods)

The revamped theater now features 4K Sony projection systems, 7.1 surround sound and about 300 seats, including the balcony. The interiors have been redone and expanded, with some original Art Deco features retained.

The renovation also added two dressing rooms backstage as well as ADA-accessible features such as ramps and even a shower. Chopper Dawson and F. Richard Wilton Jr. served as the contractors while McKinney & Co. handled the designs.

The Virginia Department of Housing and Community Development granted $500,00 to the theater, which Town of Ashland matched. The town, which received the building as a donation from previous owner A.D. Whitaker, rents the building to the foundation for $1 per year.

Love said the theater aims to host live performances and stand-up comedy as well as music performances through collaboration with Broadberry Entertainment Group, the recently launched promotional group that books shows for The Broadberry and other venues in and around Richmond.

“They’re going to be doing an exclusive series of concerts here that is something they are curating for the Ashland Theater,” said Love, who has produced shows for HBO and Disney, worked with nonprofit organizations and most recently spent two years helping a children’s museum relocate and rebrand in Buffalo, New York.

Joyce and Love said the project also is going to be an economic driver that can draw people into the region. Love said movie ticket prices will be $1 cheaper than chain cinemas.

“They’re going to come here to see a movie, to see a concert, to see some comedian or a show and stay here, hopefully, to have a dinner or a drink afterwards, or visit our shops,” Love said. 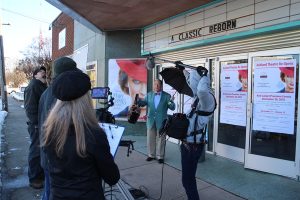 Joyce teamed with Jen Chambers, Chopper Dawson and Clark Mercer to work with the Ashland Main Street Association on a series of pop-up events in the space. One event included a viewing of “Remember the Titans” plus a discussion panel with some of the people the movie was based on.

Love said he was attracted by the idea of reinventing the old building into something new and appreciated the personal connections of the community.

“I hear constantly from people who are like, ‘I held my seventh-grade boyfriend’s hand for the first time right there in that row’ or ‘I went on my first date with my soon-to-be-wife in this theater,’” Love said. “There are a lot of nostalgia stories and that’s the exciting history. It’s certainly fun to look at an Art Deco building, but I’m excited about the personal histories that live in the walls of this building.”

Get ready, Ashland is the next frontier.

Kudos on saving and opening the theater. Great public private venture. Maybe Broadberry can take over the Hippodrome too. City put millions into it and except for the opening of the Jazz Festival and a couple of political events that space is never used.