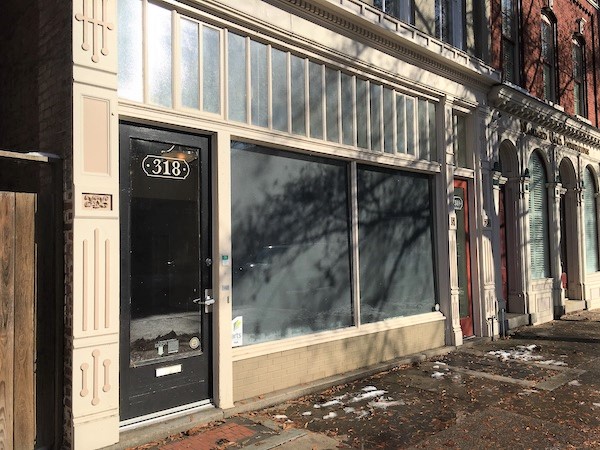 Never Enough Books is preparing to open near the intersection of West Broad and North Monroe Streets. (Mike Platania)

An Arts District storefront is turning a page.

Behind the shop is John King, who formerly owned Clayton’s Cafe in the basement of 909 E. Main St. near the state capitol.

He said when a favorite bookshop of his in Charlottesville closed this fall, he made moves to open a shop of his own in Richmond.

“I talked it over with my wife and we thought it’d be a good opportunity,” King said. “I bought part of the stock of the store that’s closed and had it moved from Charlottesville to Richmond.”

Never Enough Books will carry a range of genres in its 3,400-square-foot space, including general fiction, science fiction, poetry, history and children’s. King said he’s working on furnishing the space and will operate an online store.

“There must be around 300 boxes of books in there now,” King said. “We’re trying to make it a warm, cozy place. We might offer some coffee or tea, but not have a whole cafe or anything.”

The bookshop will open a few doors down from record store Steady Sounds in the space formerly occupied by tech firm Websmith Group. King said he looked around other neighborhoods, including Scott’s Addition and Church Hill, before landing in the Arts District.

Describing himself as semiretired, King said he’s built an extensive private collection of books through the years.

“I read mostly mysteries and thrillers; that’s mostly what my collection is. I have several signed first edition mysteries that are probably worth $200 to $300 each,” he said.

In the age of online commerce, King said he still believes there’s room in the market for small bookstores.

“I think people just like talking to people about books and authors. … I think it’s coming around, there’s more and more interest in books. You just have got to fight the Amazons of the world,” King said.

As the new bookshop is preparing to open adjacent to a record store, a shop in Shockoe Bottom has combined the two concepts. Small Friend Records & Books opened in the spring at 105 N. 17th St.