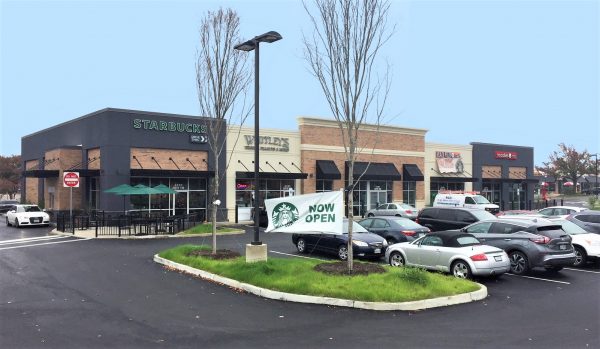 Barely a year since opening to tenants such as Starbucks and Noodles & Company, a shopping center along West Broad Street has changed hands.

The Dominion Shoppes at 4101 Dominion Blvd. in Innsbrook sold last week for $8.5 million.

The buyer was Haymarket, Virginia-based Dominion Shoppes LLC. The transaction was recorded with the county on Dec. 11. 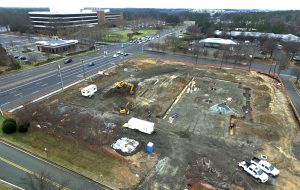 An aerial shot of the Dominion Shopping Center under construction in 2016. (Kieran McQuilkin)

Demosthenes J. Zissios, who signed the deed on behalf of the buyers, could not be reached for comment Monday afternoon. Records also indicate the group obtained a $4.9 million loan from Fairfax-based Apple Federal Credit Union to help fund the acquisition.

The sale of Dominion Shoppes adds to a burst of development activity occurring near the Broad Street gateways into Innsbrook.

WAM Associates LLC, led by Joe Marchetti Jr. and Richmond-based WVS Cos., in October filed updated plans for the second leg of their Innslake Place apartment development at 4235 Innslake Place in Innsbrook.

Plans call for a five-story, 121-unit apartment complex to rise on an existing surface parking lot next door to the Benchmark Mortgage Cos. building on the site. The apartment building would wrap around a three-level, 255-space parking deck for office tenants and residents, and include a courtyard and improved walkways with enhanced landscaping.

That phase would add to the first piece of Innslake Place, which looks to bring a total of 221 apartments to the 4-acre parcel at Innsbrook Drive and Dominion Boulevard that was rezoned under the county’s urban mixed-use (UMU) designation.

Another former Innsbrook gas station site across the street from Dominion Shoppes also has been redeveloped into the area’s first Corner Bakery restaurant at 11000 W. Broad St.