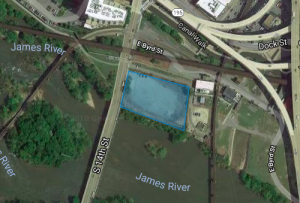 Two local developers known for height are sticking to the surface with their latest project near Shockoe Bottom.

Developers C. Samuel McDonald and Charles Macfarlane this month purchased a 1.6-acre site at 323 and 325 S. 14th St. from Norfolk Southern Corp. for $1.6 million, where they’re planning to improve an existing empty surface lot into a parking haven for commuter and business parking.

“The city’s parking studies show there is a critical shortage of attractive parking options in Shockoe Bottom,” McDonald said.

McDonald, who with fellow developer Mark Scordo runs Property Results, is a prolific multifamily developer in Manchester. Macfarlane, of Macfarlane Partners, has completed several apartment projects in and around Manchester and Shockoe Bottom.

Through its 14th Park LLC, the transaction was recorded Dec. 12, according to city property records. The parcel most recently was accessed for about $1.8 million.

McDonald said they did not consider building a residential structure on the site since it’s located on the river side of the flood wall.

The site is zoned industrial, which can accommodate parking, and is surrounded by property that the city’s public works department owns.

They’re finalizing plans for the surface parking site, including the number of spaces and a management firm to run the facility, McDonald said. The project is set for an early summer delivery.

Plans call for the parking grounds to be landscaped and lit to accommodate monthly and daily commuters, McDonald said. The new lot also will accommodate bus parking, river canoe and rafting guide operators, and connect to commuter lots on Mayo Island.

As part of the site improvements, McDonald said a landscaped buffer and trail is slated to be installed at the edge of the James River on the property.

He said the trail will connect to a planned extension of the Virginia Capital Trail that the city is eyeing across Chapel Island.

First adopted by the city council in 2012, the city’s Riverfront Plan envisioned a series of recreational improvements to Chapel Island, which includes a “universally accessible shared-use pathway that will connect 14th Street to Great Shiplock Park,” according to the master plan document.

City and Capital Trail representatives are identifying a route for the path.

A surface parking lot on riverfront property? Ouch. That’s very disappointing. At least that doesn’t preclude future development. There are plenty of multi-family residences at Haxall Point built on the river side of the flood wall.

You may not realize this about Haxall Point, but it is built so that cars and people have access above flood level. Both the office and residential building can get out by the 10th street access, which is above the flood stage. Together those buildings essentially become part of the flood wall as they were technically built up stream from where the flood wall originally started about 12th street. If they want to build residential on the property in this article they would have to have some way for people to get back over the flood wall and currently that… Read more »

It would be great to have a park here, but that would require the City to buy it. At least the area will be more regularly utilized and be safer than it currently is. There’s no way to build much more than a parking lot here due to the flood plain. The area you mentioned like The Locks development is not at the same elevation as the area in this article.

Justin, don’t be surprised if a few years down the road, if demand dictates, that a building will rise above the parking lot. The building couldn’t occupy the flood plain area in any event, but it could generate income and needed parking in the mean time,

As with the other land down the road on Dock Street outside the floodwall, and as mentioned above, you would need TWO points of entry and one would have to be ABOVE the floodplain at all times. You thinking a bridge over the floodwall from the Downtown Expressway to an upper level of the parking deck? Is this considered the western edge of Chapel Island??

Good questions. I’m not sure it WILL be done, but I think it COULD be done. I think Macfarlane created the Park-n-Go concept at the airport, so he knows his parking biz. I just think a parking site leaves itself itself available for future development without throwing away future development. He’s a smart guy.

Shocking. What an awful idea and use of this land. a parking lot

Mark North
I see Flood Plain Brewery in the future. Stop here to wet your whistle.

The key to making a parking lot palatable is professional landscaping. They need to plant tons of trees and flowers with storm water abatements and rain gardens, etc. Instead of an ugly parking lot, for a few extra bucks (fairly cheap actually) they can turn the space into a parking garden

The storm water enters the river directly where the James has over 7,000 square miles of upstream drainage area. The site has 0.000031% of that area. The threshold for SWM is usually 1%, thus the storm water abatement is of virtually no value to the river. Perhaps they could convince the city to use the wasted cost of that and improve other areas of the city drainage infrastructure where lives and properties are threatened by flooding.

Storm water tree wells (which is basically a tree over a drain) helps filter the water. So do permeable pavers and rain gardens (trees and flowers planted around drains). These are low tech, but effective means of keeping the river and the Chesapeake Bay clean. I’m not a fan of useless government impositions either. But I am a fan of using simple techniques that make our city a bit cleaner and more beautiful. A few trees and plants can do this and still provide us with much needed parking and access to the river. All parking lots should utilize them.

Pavers need maintenance, but I agree that these items will help. Just not that much. I’m all for landscaping, etc. I just think any major expenditure would be of far more benefit in areas that improve the health and safety of the locals. Less than 2 acres draining directly to the river with 4.5 MILLION acres of runoff just has no possibility of beneficial water quality improvement. We need to spend our dollars as wisely and as economically as we can.

There are landscaping requirements that I’m sure the city will enforce.