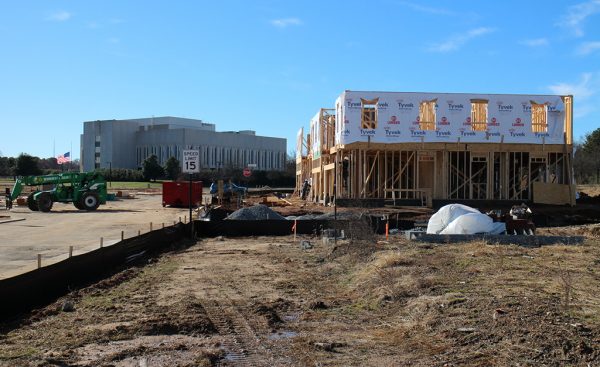 : The first building under construction beside the SunTrust building site. (Jonathan Spiers)

Two years after its initial phase was approved, and nearly four years since the project was proposed, the first units of a nearly 200-townhome complex off Parham Road in Henrico are under construction.

A cluster of four townhomes is beginning to take shape on the roughly 30-acre site beside the former SunTrust building at 7818 E. Parham Road, on the north side of the road between its intersections with West Broad Street and Shrader Road.

Called West Chase Townhomes, the development is by Virginia Beach-based Kotarides, which also is building the 187 units through its new-home construction arm Corinth Residential.

Information for the project on Corinth’s website puts the for-sale townhomes at 2,000 square feet with three bedrooms and 2½ bathrooms. Prices will start in the mid-$200,000s, with community amenities including a pool, dog park, playground, clubhouse and walking trails.

Each townhome also will include a two-car garage, the size of which was a point of discussion that prompted the county planning commission to delay its approval by a month in mid-2016. Some commissioners said the initial size proposed would not have been able to accommodate large vehicles like SUVs and pickup trucks, among other concerns that the developer addressed with additional proffers.

That approval was for the first phase of the project, consisting of 119 units. The remainder of the project will require a separate development plan approval at a later date. 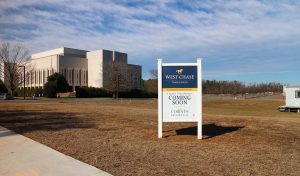 West Chase Townhomes is under construction beside the former SunTrust building on Parham Road near Broad Street. (Jonathan Spiers)

Kotarides owns three parcels that make up the project site, which it purchased in May 2015 for $2.4 million, according to county property records. The developer first sought rezoning for the project that February, with representation from Jim Theobald of downtown law firm Hirschler.

Site work for the project began about 18 months ago. Kotarides’ Alanna Deal said two model units and two spec homes are expected to be built by April 1, and she said the company is aiming to build three or four additional units per month going forward. A development cost for the project could not be confirmed Monday.

The townhomes are among several projects in the works for Kotarides in metro Richmond.

The company, which builds apartments and condos primarily in the Tidewater area, built the 368-unit Belmont at Chesterfield Towne Center apartments just north of the shopping mall, and it is getting ready to start on a mixed-use conversion of the old Department of Game and Inland Fisheries building in the 4000 block of West Broad Street in the city.

Meanwhile, the former SunTrust building beside the Parham site remains on the market and has attracted interest from potential buyers, according to listing agent Brian Berkey with Cushman & Wakefield | Thalhimer.

Berkey said the nearly 235,000-square-foot building, which was built in 1974 and served as an operations center for SunTrust, has attracted inquiries from parties floating such uses as office, retail and residential.

Berkey, who is co-listing the 15-acre property with Thalhimer’s Paul Silver, said discussions with potential buyers continue. Marketing materials for the property do not include an asking price.

The last sale of the property recorded with Henrico occurred in 1980, when SunTrust predecessor United Bank purchased the property for $13 million. A county assessment most recently valued the site at $5.6 million.

Asked if a deal was imminent, Berkey replied: “Nothing that we’re at the finish line with, but we’re certainly in discussions with a fair amount of people. There’s a lot of interest from a variety of different users.”

As for the development occurring next door and any effect it may be having on his listing, Berkey added: “It’s good to see the activity in the area.”

The SunTrust predecessor was United Virginia Bank, not “United Bank”.

Henrico County is working to improve the pedestrian accommodations along this corridor. Please continue to ask for better sidewalks and road crossings!