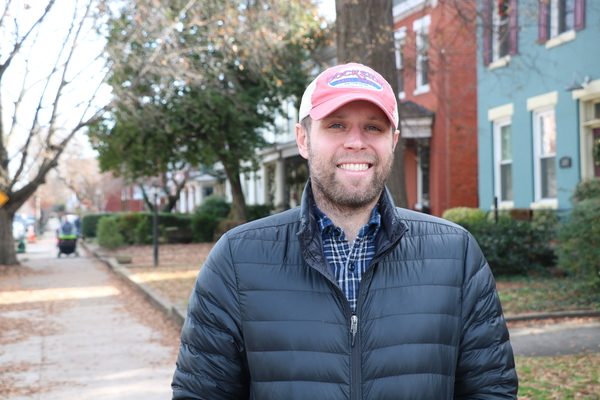 Rob Zorch met with BizSense on a December afternoon in The Fan to talk about his new pizza venture. (Charlotte Woods)

Three years ago, as a hobby, Richmond Rob Zorch took a deep dive into pizza making.

He began creating pizza from scratch in his kitchen and posted pictures to Instagram, garnering nearly 1,000 followers. He also went down the rabbit hole of internet forums for pizza enthusiasts to learn from a community of hobbyists and experts.

All this resulted in the Dec. 8 launch of Zorch Pizza, a food truck built into a converted U.S. Postal Service vehicle that serves up slices and pies at breweries on the weekends.

“I’ve always liked cooking ever since graduating college and getting married. I’ve kind of been the one in the kitchen all the time,” said Zorch, 33, a graduate of University of Richmond.

Once he began perfecting his homemade sauces and doughs, he thought of a business opportunity.

“There’s only one other pizza truck here and they do a really different style,” Zorch said of River City Wood Fire Pizza. “So I thought it would be cool to do this.”

Zorch, who works full time as an analyst at Anixter, a Chicago-based distributor of communication, electrical and security supplies, self-invested about $17,000 along with some bank funding to launch Zorch as a side gig. He purchased a used UPS truck from Carnet Cars and customized the interior through KSM Manufacturing, which has helped create some other food trucks around town. Nouveau created the truck’s signage. Pies are baked using a Bakers Pride propane deck oven.

“It takes up a lot of real estate in the truck because it’s like three feet deep,” Zorch said of the oven. “It’s a small space to work in, but it works.”

A Pennsylvania native, Zorch has been exposed to New York pizza on trips to the Big Apple. He drew inspiration from pizzerias such as Brooklyn’s Paulie Gee’s and the Joe’s Pizzas scattered around Manhattan where celebrities often pose for selfies. 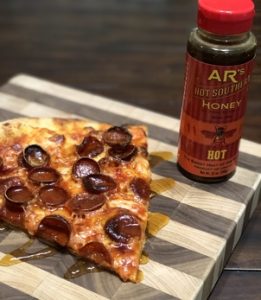 In addition to including it in recipes for some specialty pizzas, Zorch also offers AR’s Hot Southern Honey as an addition to any kind of slice. (Courtesy of Zorch Pizza)

Zorch has scrubbed his Instagram account of his old content and now posts pictures associated with his brand. Though he still works in his analyst position during the week, his mornings and weekends are spent working on his food truck business.

Zorch has operated solo so far, but now has recruited the help of his wife and friends. He’s focused on working the brewery circuit and would like to add a second truck, staff and catering at some point.

“It hasn’t been too hard to balance my full-time job and this,” he said. “I can go to my kitchen really early in the morning and do stuff and get back to my job. My evenings are free as long as I get everything done in the morning.”

If he’s smart (and I’m guessing he’s no slouch as an analyst) he’d offer a completely vegan pizza or two and also a completely organic pizza. Better yet, make all the ingredients organic and he’ll have people seeking him online and driving to him. Quality and quality ingredients are essential for success in any food service venture