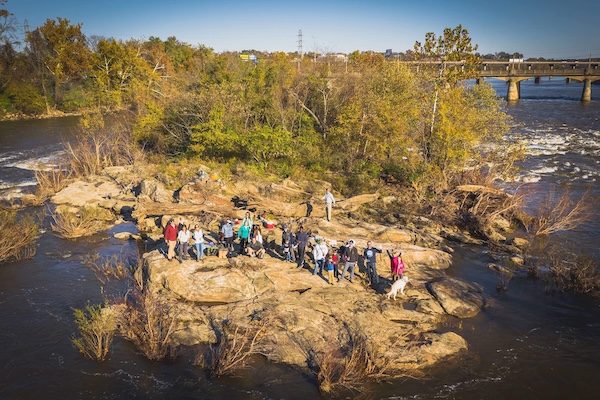 Thompson and the rest of the new owners on Sharp’s Island. (Courtesy Creative Dog Media)

Where many saw a random island in the middle of the James River, Andy Thompson saw a playground for himself and his friends.

Thompson is the founder of outdoors news site Richmondoutside.com. He also co-founded Terrain360, which makes Google Street View-like maps of trails, parks and waterways, and Wild Streaming, which sets up streaming cameras of wildlife nests.

When recruiting friends to purchase the island, Thompson said reactions generally fell into one of two categories.

A small house stood on the island from the late 1800s until the 1970s, when local architect Henry Tenser Jr. purchased the land. The foundation of the house was irreparably damaged by Hurricane Camille and, in lieu of demolishing, Tenser burned it down, according to Times-Dispatch archives.

By random chance, Thompson now lives a block away from Tenser on the Southside.

“I went over and hung out with him, and he showed me all these cool old pictures of kids hanging out on the island. There’s like this cool emotional chain of custody of the island,” he said.

Tenser wound up selling the property to the Dedes family, which put it on the market this year for $44,000, on par with its assessed value. Joyner Fine Properties’ Cary Turpin had the listing. 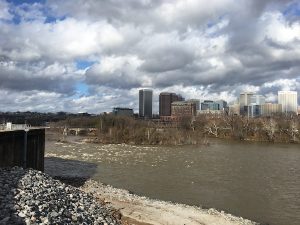 In negotiations, Thompson put it simply: “It’s such a random piece of property, there’s no way to truly assess the value of it. How in the world do you decide what it’s worth?”

The island’s technical address is 0 Sharps Island, and it’s considered unimprovable by the city, Thompson said, because it sits below the 100-year flood plain. Despite that, Thompson has big plans.

“There’s plenty of work to do. It’s totally overgrown with brambles and thickets, and all sorts of invasive species that have taken over,” he said.

“The first step is to get out there, and winter’s the best time to do it since everything’s died down, and carve out a couple of good camp spots. From an ecological fishing perspective, it’s amazing. It’s going to be an amazing place to go fishing in the spring.”

With remnants of the house’s granite foundation still visible on the island, Thompson said he’d be especially thrilled to turn the island into an art exhibit.

“Honestly, one of the things I really want to do is like a public art installation, like a sculpture or something that you could see from the bridge,” he said. “How cool would it be, if you’re an artist in the city, to have that as your gallery, your palette to paint on?”

Thompson added that if he can get the insurance side of things figured out, he’d love to host corporate retreats on the island or list it on Airbnb.

To celebrate the closing of the deal, Thompson ferried his fellow co-owners out to the island for a party.

“Honestly, I think a lot of the fellow owners didn’t know what they were getting into until we had that party. Each of them took me aside and were like, ‘Dude this is great.’” he said.

“When you see your kids out there and they’re running around, and we’re cooking marshmallows, it’s just awesome.”

I’m one of the kids (Henry’s daughter) who used to hang out on the island, camping and just fooling around outside! If Andy is interested in a reunion, I’d be in…

AirBNB? It is in the floodway. With the exception of Lloyd’s of London no one is going to offer flood insurance or any business liability coverage except campground coverage and even then being in the river on a small island that probably can go completely underwater, I doubt it. Might want to donate it EnRichmobd with condition for use and maintenance.