The nearly 26,000-square-foot Wilton Commerce Park development is slated for construction in March. (Wilton Cos.)

A busy local development firm is gearing up for its next project in Henrico County.

The Wilton Cos. soon will begin construction on Wilton Commerce Park, a nearly $4.5 million, 26,000-square-foot project at 5801 Staples Mill Road.

The 5.1-acre complex, which would consist of flex industrial and office space, is near Wilton Cos.’ 400,000-square-foot Hermitage Industrial Center property, which company President Richard Johnson said is 100 percent leased.

“This is a product that is well-received by the market and is something we are good at developing,” he said. “The demand is there and we anticipate it will fill quickly.”

The Wilton Commerce Center project is being constructed on spec, Johnson said, adding the firm has no plans to pre-lease the center.

Wilton Cos., which has owned the site for about 10 years, had the property rezoned from office to light industrial use last fall. The development plan for the site was approved in November.

“We’ve been holding that property for another entity for a possible expansion,” Johnson said. “When it didn’t happen, we decided to develop the site ourselves.”

Plans call for an existing office building on the site to be razed and replaced with two buildings, one totaling 11,800 square feet and the other 14,000 square feet, according to documents filed with the county’s planning department. The property would be accessible via Staples Mill Road and School Avenue, which runs along the property opposite Staples Mill.

Construction is set to begin in March, Johnson said.

Wilton Commerce Park adds to a busy workload the firm has on its plate across Henrico.

Work is underway to convert the former Canterbury Service Center at 11600 Patterson Ave. into a Dunkin’ store. Wilton also has executed a 25-year lease with Virginia Beach-based Restaurant Property Investors IV LLC for a new Taco Bell that’s set to rise on a half-acre outparcel in the Tuckahoe Village Shopping Center at 11242 Patterson Ave. 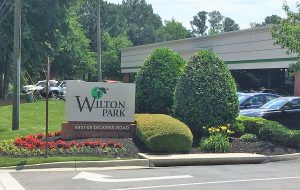 The company is filling up its final retail phase of the Shoppes at Reynolds Crossing development, the latest addition being Utah-based Roxberry Juice Co., a new-to-market brand that serves smoothies, fresh-pressed juices and bowls at 6976 Forest Ave., across from Walmart. Other tenants signing on to the 14,350-square-foot shopping center include Orangetheory Fitness, B.Good and Mezeh Mediterranean Grill.

Beyond retail projects, Wilton has leased 50 percent of its new 16,000-square-foot Wilton Park III office building at 4901 Dickens Road to AssuredPartners, which occupies the entire second floor of the building, Johnson said. The rest of the building would be leased to accommodate multiple tenants or a single user.