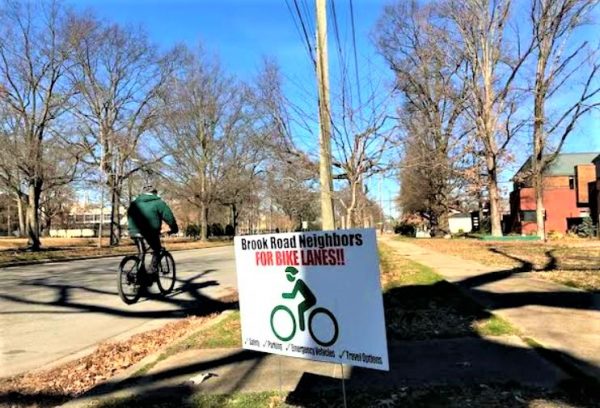 The planned 3.5-mile bike lane along Brook Road has drawn impassioned response from neighborhood residents, both in favor of and against the lane. (Photos by Mike Platania)

The city’s Land Use, Housing and Transportation Standing Committee convened Tuesday and sent two ordinances to council without recommendation: one that would block a planned bike lane along a stretch of Brook Road, and another that would rename the Boulevard after tennis legend and Richmond native Arthur Ashe.

The planned 3.5-mile bike lane would run along Brook Road from its intersections with Azalea Avenue and West Charity Street. The project also would involve converting one of the road’s travel lanes to a floating parking lane to divide cyclists from vehicular traffic. Council members Chris Hilbert and Kim Gray co-wrote the paper opposing the project last June.

About 60 people were in attendance at Tuesday’s meeting, with four speaking in favor of the bike lane ban and six against. 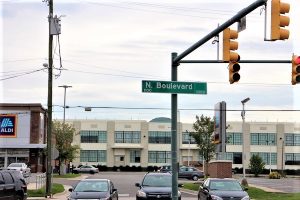 The city is considering renaming the Boulevard to honor Arthur Ashe.

A member of the Edgehill-Chamberlayne Court Civic Association spoke in favor of the ban, saying that it is “traumatizing to think of floating parking lanes” and the lanes are “not something we’ll get accustomed to.”

Louise Lockett of Bike Walk RVA, an advocacy arm of local nonprofit Sports Backers, spoke against the ban. Lockett said stopping the project would jeopardize future bike lanes in the city, arguing that VDOT is less likely to provide grant funding to localities that have rejected similar projects after receiving funding for them.

The committee voted to send the ordinance to council without recommendation, as it did in November with an ordinance to allow dockless scooters to operate legally in Richmond.

The committee, which is made up of Gray and fellow council members Michael Jones and Ellen Robertson, also punted on an ordinance that would rename the Boulevard as Arthur Ashe Boulevard, sending the paper to council without a recommendation.

Gray first introduced the renaming proposal last fall on behalf of a nephew of Ashe.

Council is scheduled to vote on both ordinances next week at its Jan. 28 meeting.

The committee also was shown presentations on state-designated Opportunity Zones and the city’s bike share program.

Jakob Helmboldt, the city’s pedestrian, bicycle and trails coordinator, said the bike share program’s next phase, which doubles the city’s fleet with 20 additional stations and 220 more bikes, is scheduled to be completed in late summer 2019. Helmboldt said bikes and stations are being outfitted to convert the fleet to electric-assist models by May.

“It’s traumatizing. It’s not something we’ll get accustomed to.” (What is, “Things Richmonders have said about literally any change in the past 300 years”?)

I write this as a resident of the Museum District and a come-here from Fairfax 23 years ago. I recognize that many Richmond streets were named after white business and political leaders who may not have had the best interests of the City’s black population when they were alive. I recognize that there is an underlying resentment of that and a desire to change the names of streets where they feel that an impact can be made. This initiative to rename a major street of no historical racist heritage is short sighted however. This is not Jefferson Davis Highway. Arthur… Read more »

I’m also a “come here.” For over a decade, the ornate theater fronting Monroe Park was referred to as “The Mosque” – after it had been rebranded. We also enjoyed shows at “the Carpenter Center” long after it, too, had been rebranded. There would certainly be a public cost in changing some street signage, and individual costs to those who pre-purchase stationary and such, but residents of this area would still live on and around “The Boulevard.”

it’s not just the cost of stationary. Those who live on The Boulevard would have to do a change of address with every account and form that they use. Theres a remarkable cost for road name changes when it affects businesses and residents.

In addition to the cost and hassle it will cause residents of the Boulevard, this is just another example of politics over logic. Arthur Ashe has a statue on Monument Ave, and the Ashe Center named after him, which if I recall correctly is located on Boulevard. I see this is a waste of time and money. Leave the street name alone. If the city feels the need, then name a government building after him.

I recently moved from Forest Hill to Chesterfield and had to undertake that entire grueling process. That’s 20 minutes of my life that I can never get back.

People might have more faith if they knew the bike lane and bike share program was being well run and managed. Bike lanes aren’t being swept, lines replaced, and in my neighborhood DPW admitted at a meeting they did not release that large trucks used Grayland Ave before its redesign. I support bike lanes but we need better management.

Side note: Another publication tried to get an update on the City’s bike share but could not get any numbers. Glad the Baltimore paper got some emails

I couldn’t agree more. There seems to be so much waste and poor planning when it comes to these bike lanes. I can’t remember the last time I saw a bicyclist using the Brookland Parkway lanes. Jakob Helmboldt always seems to be short on real facts and statistics even though, according to the Times-Dispatch, his base salary from the city last year was $86,833.