Addison Clark designed branding, including a logo and social media graphics, for Rivanna Woods Financial Tax Services, a financial services and tax prep firm based in Palmyra. American Foundation for Donation and Transplantation hired the agency to build a mobile-friendly website and provide ongoing marketing services. 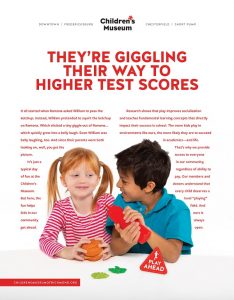 An ad from Elevation’s new campaign for the Children’s Museum of Richmond.

Elevation created a campaign for Children’s Museum of Richmond. Called “Play Ahead,” the campaign includes print ads that are running this month in publications in museums in Richmond and Fredericksburg. Work included content created for local parenting blogs about topics such as school preparedness and benefits of play.

Ndp made three hires for its Richmond office. Heather McCormack is a marketing analyst, Brett Shiflett is an account executive, and Tracie Williams is a senior project manager. 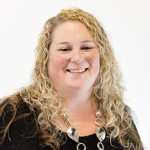 Red Orange Studio launched a rebrand and website update for lifestyle blogger and entrepreneur Ruth Soukup. The studio won a rebrand project with moving and storage company Hilldrup, based in Stafford. Red Orange will be collaborating with Dotted Line Collaborations for strategy and market research phases of the project for the company’s relocation services division.

Lewis Media Partners is working with Colonial Downs Group on a marketing campaign to promote Rosie’s Gaming Emporium, an off-track horse-betting parlor opening locally in June. Work will include strategic media campaigns to include both traditional and digital elements. 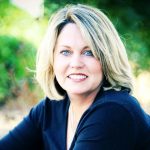 The Martin Agency was named lead agency for UPS. The agency, which previously held the account from 2000-2009, will handle strategic brand and campaign communications for the company’s North American, European and Canadian territories. Fellow IPG agency Initiative, based in New York, will handle the media portion of the account.

Think was hired by Hospice of The Piedmont to brand and promote the Charlottesville-based nonprofit’s annual Run and Remember 5K race. Work includes logo design, print and marketing materials, and website development.

Spang worked with The Martin Agency on a round of national broadcast work for online travel site Kayak. The “Change of Scenery” campaign work involved travel to Barcelona, Spain, for warm-weather shooting locations and production in Richmond. 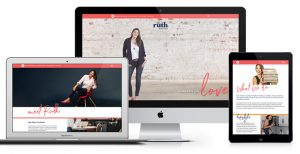 Liz Stiff is continuing Native, which is based out of the Scott’s Addition Gather. The agency recently signed Major League Soccer team LA Galaxy as a client.

Cure picked up The Byrd Theatre as a client. Work will include a logo and branding around the theater’s 90th anniversary year. Cure also landed Newport News-based Peninsula Metropolitan YMCA. Work will include a print and digital campaign to promote summer programs and camps.

The King Agency opened a second office in Hampton Roads, where it picked up First Team Automotive Group as a client. The office is located at One Columbus Center in Virginia Beach’s Town Center.

Work Labs is relocating to 1623 W. Broad St., where it is sharing space with coworking brand 804RVA under the shared brand Work & Friends. The agency was previously housed in founder Cabell Harris’s Monument Avenue residence.