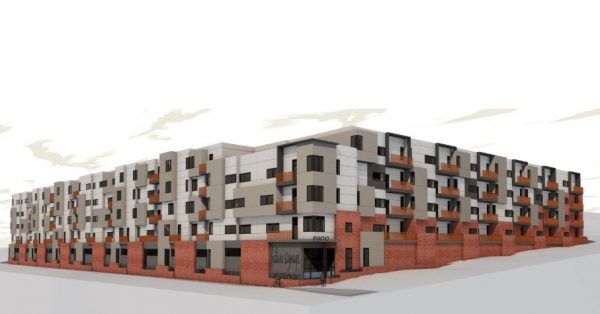 A vacant wooded lot at the edge of Shockoe Bottom is being primed for an apartment development.

Genesis Properties is preparing to break ground this summer on a $26 million, five-story project on a 3.6-acre L-shaped parcel at 1900 Venable St.

“It’s very close to the heart of downtown, and within walking distance of city hall and the state capitol,” Solarz said. “It’s also not too far from Shockoe Bottom, which is seeing a lot of activity.”

Construction on the project, which is yet to be named, is slated for August, Solarz said, with the complex set for delivery by late 2020.

A development plan was filed with the city’s planning division late last year. Genesis has owned the property through affiliates since 2007, city records show.

The project will offer income-based rents, Solarz said, with its financing covered by a mix of tax-exempt bonds, low-income housing tax credits and traditional financing.

“The site sits on one of the best views of downtown in the city,” Solarz said. “In designing the building, we wanted to take advantage of the site and maximize the views for the future residents.”

To maximize site use, plans call for the development to be built to the edge of the sidewalk along North 18th and Venable streets — disturbing roughly 2 acres of the 3.6 acres that make up the site.

Access to the property is via North 18th Street, with a large buffer and retaining wall being planned for the rear of the development and the existing Jefferson Townhouses property, which takes up much of the block.

A general contractor for the development is pending, Solarz said.

Richmond-based Walter Parks Architects is designing the apartment project. Timmons Group is completing the civil engineering and landscaping. Balzer & Associates has been tapped as the structural engineer, and ONeil Engineering Services is handling mechanical, electrical and plumbing design.

Upon completion, Genesis will manage and lease the property.

Amenities would include a bike storage area, fitness center, clubroom, covered parking and a rooftop deck.

Genesis’ East End project is one of several the company has underway across the city.

In Northside, the firm continues rehabbing the 1940s-era Bellevue Apartments, located along the east side of Chamberlayne Avenue between North and Westminster avenues.

The company also rehabbed the Raven Place Apartments nearby at 1710 E. Broad St. in 2009, and the Shockoe Valley View apartments in 2017 at 1904 Cedar St. in Shockoe Valley.

Genesis has been a great story in the Richmond development scene and a leader in the development of affordable housing as well as historic redevelopment. This is just one of the new Shockoe Valley apartment deals coming on this summer with others underway by Crescent and planned by Spyrock and the new Wyndham Hotel by SWS. Good times continue.

So will they be the fenced in, 24 hr security with Jefferson?

Love developers ….your view along and across 18 Street will include the side/underside of King Bridge, the off ramp of I95 and the back side of VCU parking decks along 95. What view; well I guess a view of the backside of the skyline is still a view.

Please elaborate on your comment that security is needed. Being familiar with Richmond, I can surmise why you would write this but others not familiar with the area might not have any idea.

Your commentary generally is written in a way to “stir the pot” or some would say “troll”. It takes away from your commentary when you actually do provide enough context for it to be a valid comment.

Jake, Sorry but this site, like many business sites sound more like a press release than a news site. No in-depth questioning. My comment on the fence relates to the plan and the rendering which mention “covered” parking but on the slope, and via the rendering, I don’t see what appears to be a garage entrance and they did not mention any garages so if the covered parking is behind the site are they going to close this site in with Jefferson Townhomes. Jefferson is fully wrapped in security (and this is the same owner) so are the two parcel… Read more »