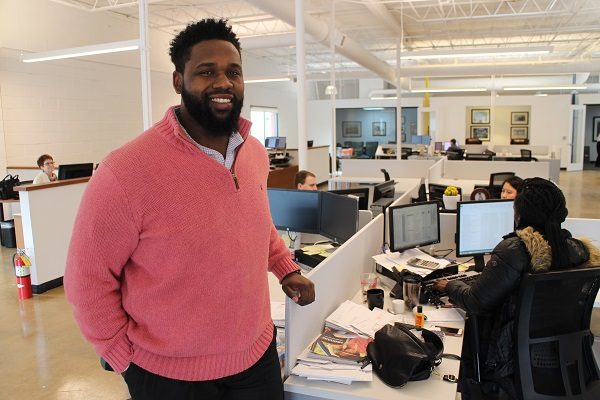 Nigel Williams at his desk in the Agili offices. (Photo by Jonathan Spiers)

When Nigel Williams huddles with friends to watch the Super Bowl this Sunday, the local financial professional and former Hokies defensive lineman will be doing so with a unique perspective – that of an NFL free agent.

No. 95 at Virginia Tech when he played for Frank Beamer – No. 8 his senior year under current coach Justin Fuente – Williams has spent the three years since graduation as an active free agent, practicing with NFL teams while maintaining his job as a portfolio and investment administrator at financial planning firm Agili.

The 25-year-old Benedictine grad, who now coaches at the school, spent about five months in 2017 as an undrafted free agent for the Buffalo Bills, playing preseason before he was released that September. Last year, he worked out with the Tennessee Titans before getting picked up by the Arizona Cardinals, which signed him as a free agent for 1 1/2 months. 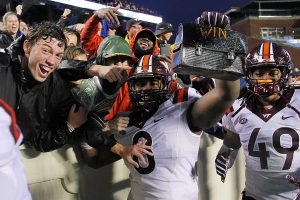 Today, Williams – not to be confused with the Collegiate School quarterback of the same name (no relation, though Williams coached against him with Benedictine last fall) – is keeping himself ready and in shape for the next call, which, with the Big Game this Sunday, wouldn’t come for another several months.

While he’s hopeful for a call while maintaining his free agency, the 6-foot-3, 295-pounder said he is fully committed and invested in Agili, where he has worked since early 2017.

With a finance degree from Virginia Tech, Williams said he was drawn to the financial field while playing on the football field at Tech’s Lane Stadium. During summer camps, he said, the team would bring in advisors who would encourage players who were bound for the pros to hire a planner or advisor to handle their money.

“I thought, why don’t I do that myself, instead of hiring somebody,” he said. “You hear all these horror stories of people playing 20 years in the NFL or NBA and they go broke in the next coming years. So, I figured, why not? The best person to trust is yourself.” 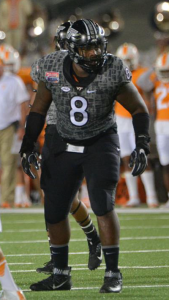 On the field with the Hokies.

Before graduating from Tech in 2016, Williams – who grew up in Richmond’s Huguenot area – interned with a Morgan Stanley office in Roanoke, leading to a seven-month stint with MassMutual Greater Richmond before joining Agili.

The 25-year-old firm, which recently moved its offices to Scott’s Addition, was known until last year as JoycePayne Partners. It is run by Cindy and Michael Joyce, whose son, Tim Joyce, was a classmate of Williams’ at Benedictine.

Williams calls Mike Joyce a mentor and said he is working toward becoming a financial planner with the firm.

On top of his job, Williams pursues his interest in art, doing pen-and-ink drawings and 3D work while also teaching night classes with his former Benedictine art teacher at Richmond’s Juvenile Detention Center through Thrive Church.

Williams said he took an interest in art in school as a way to express himself outside of football.

“Football is my way of escaping as well, and I didn’t want to just make that the only way, because football is not always going to be there,” he said.

While pursuing his own dreams on the gridiron, Williams also helps those following in his footsteps at Benedictine, where he said he enjoys giving back to the football program as a defensive line coach. 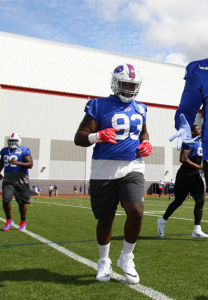 Practicing with the Buffalo Bills.

“The coaches reached out to me; they had a spot for me on the staff to help out,” Williams said. “It’s a position I’m comfortable with, I’ve been playing my whole life, and I just wanted to do what I could to give back to the high school that’s done so much for me.”

On Sunday, Williams said he’ll be rooting for the Los Angeles Rams, whose defensive tackle, Aaron Donald, Williams played against in college.

“He’s a phenomenal player, and I really want to see them pull it out – seeing a younger team come in and leaving their mark on the NFL as well,” Williams said. “I can honestly say I’m tired of seeing New England in the Super Bowl, but it is cool seeing Tom Brady’s greatness consistently every year.”

As for his own hopes for a shot at the Big Game, Williams said he’s ready to answer the next call, but he’s not getting his hopes up and will be fine if it never comes. He said he sees his day job as his priority, not a fallback.

“It’d be cool if football’s in my life, but I’m also prepared for life after football,” he said. “A lot of guys, you don’t really see that. They’re life or death for football, and I didn’t really want that. I didn’t grow up with that being the mindset.

“With my mom and dad, they always reiterated: Sports is a vehicle to take you where you want to go in life,” he said. “Football has definitely shown me plenty of experiences that most people don’t get to see, and it’s also opened up gateways for a better future as well.” 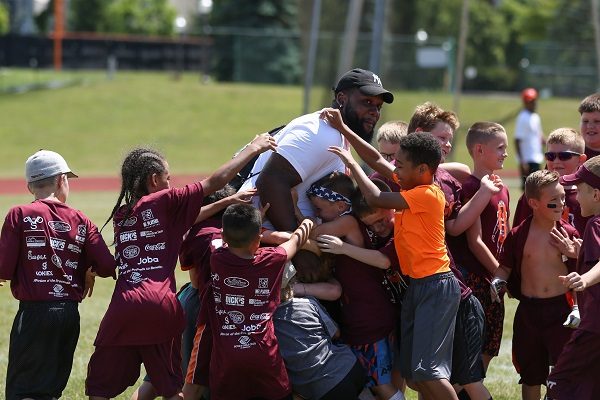 Williams fending off a friendly pile-on.

The photo entitled “On the field with the Tennessee Titans” is incorrect. That’s a Virginia Tech uniform from the VT-Tennessee game at the Bristol Motor Speedway.