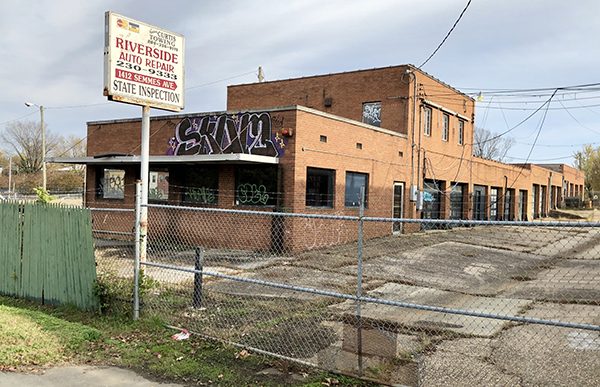 Two prominent local development groups have secured the site for their first project in Manchester.

The Monument Cos.’ Chris Johnson and Tom Dickey, along with Howard Kellman of The Edison Co., last month closed on their purchase of the former Muse Buick property at 1414 Semmes Ave. for $3.1 million.

The group is planning to transform the 2.7-acre city block bounded by Semmes Avenue, West 13th, West 15th and McDonough streets into a mixed-use project that ultimately will house 180 apartments and commercial space.

The sale also includes an abandoned residence at 400 W. 14th St. Combined, the sites most recently were assessed for about $3.1 million.

JLL brokers Jake Servinsky and Jimmy Appich represented the Muse family, which had owned the site for more than 60 years.

The initial phase calls for several existing buildings on the property to be converted into 47 one- and two-bedroom apartments, costing about $6.7 million to redevelop.

Looking to bring more retail options to the area, Kellman said the group is exploring the possibility of converting a one-story, 1,325-square-foot building at the corner of Semmes Avenue and West 14th Street into commercial use.

“We think the space is ideal for a coffee shop or a restaurant given its location on the property,” Kellman said.

Monument, which is also the general contractor on the project, may begin work on the project this month, pending city approval for demolition. The company’s property management arm, Legend Property Group, will oversee leasing and management upon completion.

Dickey said the initial phase would be completed by year-end, allowing the group to focus on its next phase – another 67 apartments to be constructed on a 0.43-acre corner of the property at West 15th and McDonnough streets.

That phase would include amenities such as a pool, fitness center and onsite management office.

While details, including the building’s height and anticipated construction start date, are still in the works, Dickey said the group plans to submit a plan of development for the next phase in the coming weeks.

Meanwhile, planning for phase three, another 0.43-acre site along West 14th Street, is slated for another 66 apartments, although the portion of the project is still to be determined.

“We’ll start the planning process for that phase in the spring,” Johnson said. “We’re still trying to figure out what to do with the house on the corner of (West) 14th and McDonough.”

Work on the former Muse site is one of several projects slated or announced for Semmes and Cowardin avenues.

Across Semmes Avenue from the Muse redevelopment, Alabama-based LIV Development is proposing a seven-building, 289-unit community on 15 contiguous parcels totaling about 7.3 acres near the Lee Bridge at 1400 Railroad Ave.

Meanwhile, Richmond-based Harper & Associates is seeking a special-use permit to transform a cluster of warehouses at 1802 Semmes Ave. into a mix of 106 townhomes and about 4 acres of commercial space. Also, Ohio-based Brickhaus Partners is under contract to purchase the 2.2-acre tract on the west side of Cowardin Avenue at the southern end of the bridge for a multifamily development.

The former Citgo gas station at 418 Cowardin Ave. that had captured the attention of a potential Wawa development also remains on the market.

If development as planned unfolds at the Cowardin and Semmes avenues intersection, more than 575 market-rate apartments could be added to the Manchester and Swansboro neighborhoods. That could unleash a flurry of commercial interest and development, including the potential of a grocery store.

“The area has become very attractive for development,” Johnson said. “We’re excited to begin moving forward with this project and think it’s going to be a welcomed addition to the neighborhood.”

The Monument Cos. and The Edison Co. have worked together on several projects across the city, including the former Signet Bank building that was redeveloped into the 8th & Main apartments at 800 E. Main St. downtown and the former Sunny Men’s Wear building that’s being converted into a mixed-use development at 326 E. Broad St.

Monument has also secured the purchase of the finest looking old department store in downtown Roanoke for conversion to apartments. This is a busy group of developers.

Here is a link to a great aerial pic of this section of Semmes taken after Hurricane Camille http://www.railsinvirginia.com/images/abandoned/acl/shops_yard_camille.jpg

Brian, this is a phenomenal photo. I was living in Arlington, so I have a difficult time relating to the site as it is today.

Is the alignment of Semmes Avenue today the same as in this picture? The RR underpass makes it a bit confusing.

I can see Muse Buick on Smmes. Was there another auto dealership along Cowardin Avenue where Belle Summit Apartments are now?

What is the business that is shown on Belle Island? How was the island accessed? It doesn’t appear that Lee Bridge provides an access point.

The 2 bridges at Cowardin and Semmes were removed and the earth filled in when Shops Yard was finally closed in the late 1970s . The only things left from Shops Yard is a single telegraph pole standing in that grass field next to the Suntrust parking deck and if you turn right from Semmes onto Cowardin like you are heading to the Lee Bridge and you look into those woods on the right you can see a white building still standing that was part of the fueling facility. You can get more on the history of Shops Yard here:… Read more »

Brian – this is an amazing photograph, thanks for sharing

Bruce – Semmes Ave was widened to 4 lanes, raised 4-6 ft, and moved closer to the river when the “new” Lee bridge was built in the 1980s. If you look at a map of Semmes today, you can tell that the buildings at 1200 Semmes, 1300, & 1400 Semmes are aligned to each other, but not to the street. As Brian noted, this was all part of filling in the bridges at Cowardin & Semmes and closing off Shops Yard.