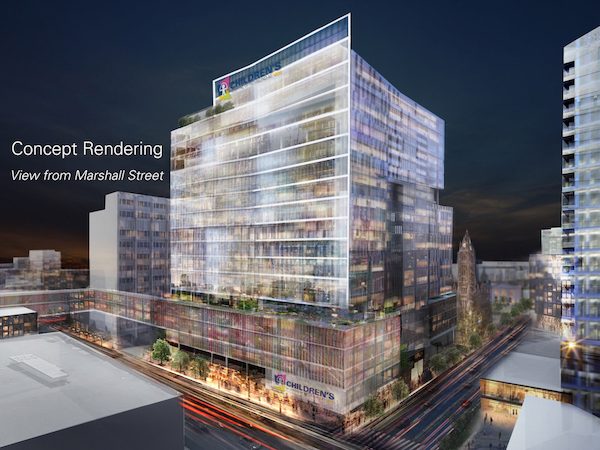 A rendering of the project, which is set to be completed in late 2022. (Courtesy VCU Health)

VCU Health is set to begin another nine-figure project downtown.

Children’s Hospital of Richmond at VCU announced plans on Friday to build a $350 million inpatient facility at 1001 E. Marshall St., between 10th and 11th streets.

The 16-story, 500,000-square-foot facility will include operating rooms and emergency services, and house 86 beds, with capacity to increase to 125. It will be an addition to VCU Health’s Children’s Pavilion, a $200 million pediatric outpatient facility at 1000 E. Broad St. that opened in 2016.

Elias Neujahr, CEO of Children’s Hospital of Richmond, said the new inpatient facility will bring all of the organization’s pediatric hospital operations under one roof.

“This project completes our children’s pavilion,” Neujahr said. “The (current) Children’s Pavilion facility will be adjoined to the new inpatient facility that’ll be built, and we’ll have an entire city block dedicated to care for children.”

Children’s Hospital of Richmond’s current inpatient services are housed at VCU Health’s Main Hospital at 1250 E. Marshall St., which would connect to the new facility via a bridge. 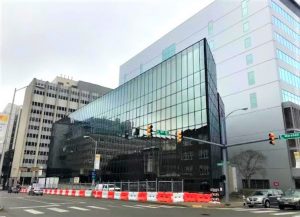 The current Marshall St. Pavilion will be razed to make way for the 16-story project. (Mike Platania)

The new building will rise on the site of the existing Marshall Street Pavilion, which will be razed. Construction is planned to begin this spring, with completion targeted by late 2022. HKS Architects is the project’s designer and DPR Construction is the general contractor.

Neujahr would not disclose specifics about the project’s funding, saying only that a variety of sources will be used, including money the organization had set aside and that it’s raising. VCU Health CFO Melinda Hancock said no state funding is planned to be used for the project.

The announcement comes about four years after VCU and Bon Secours Health System decided to back out of their involvement in the Virginia Children’s Hospital Alliance, an effort to build an independent children’s hospital in the area.

The VCHA had the backing of local philanthropists Bill and Alice Goodwin, but VCU and Bon Secours both, at the time, cited cost as a reason to pull out. The VCHA’s project had been estimated to cost $600 million.