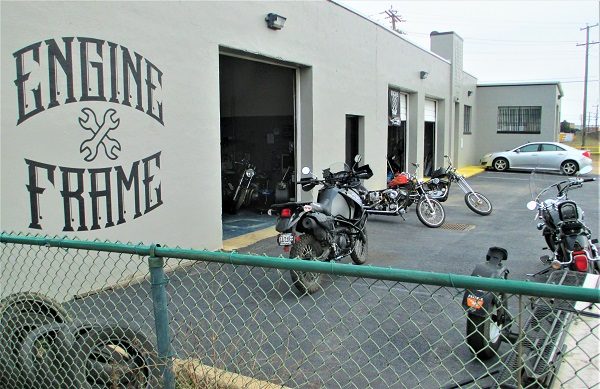 After establishing itself in a Shockoe warehouse, a 3-year-old motorcycle repair shop and community garage has moved to more visible digs across the river.

Engine and Frame now is revving up engines at 608 Commerce Road in Manchester, on a corner of Commerce and Dinwiddie Avenue considerably more visible than its previous home at 1600 Valley Road.

The combination used bike shop and community garage nonprofit is run by Cory Manning, a certified Harley-Davidson mechanic who started the venture in 2016. Manning said the new space, at 4,200 square feet, provides not only visibility but also twice the size of his old space. 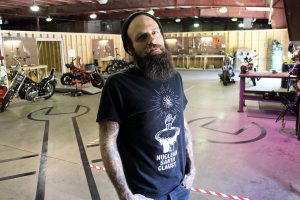 “The old space was great because we were tucked away and could kind of do whatever, but also, no one was going to accidentally find us,” Manning said. “Now, we get a lot of people just driving by.”

Since moving in September, Manning said drop-in business in particular has stepped up.

“The first month we moved into the new space, we brought in more money than we had any month since we’d opened, so just moving to the space helped a lot,” he said. “I think sales are going to do very well. I’ve had a fair amount of people stop by.”

Manning said the foot traffic is helping in his goal of sharing knowledge and tools for repairing bikes through the garage component, an incorporated nonprofit called EnF Community Garage. Riders and newcomers are able to work on their own bikes with assistance from Manning, who charges a range of rates based on services needed.

“I’m trying to figure out a way to attract people that aren’t necessarily into motorcycles but might want to get into motorcycles,” he said, adding that the larger space will allow him to expand his business to include used bike sales in addition to repairs.

“On the nice days, it’s super-busy and people use it as a destination, and that’s rad,” Manning said. “But I want to try to attract other folks too, because then, once we do ramp up used bike sales, we’re there to sell you your bike.”

Manning is leasing the space from River Breeze Properties LLC, which has owned the quarter-acre property since 2005. The building now is adorned with Engine and Frame signage that was added last month by locally based 230 Signs. 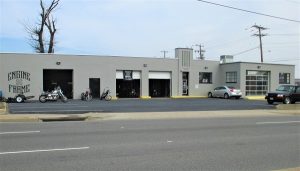 The new building is twice as large as Engine and Frame’s old space.

Since launching three years ago, Manning said business has grown steadily on the for-profit side of the venture, though he expressed a desire to do more with the nonprofit part of it.

“I don’t think we’ve really nurtured it the way that we should,” Manning said. “I feel like our efforts have been focused on the for-profit and with the move on the retail side, trying to get into sales. We’re trying to juggle so many things, it makes that difficult.”

The move has freed up Engine and Frame’s former digs to be filled by knife maker Join or Die Knives and metal-and-wood design studio Ore & Fiber, which Manning said have taken over the Valley Road space.

Engine and Frame adds to other motorcycle businesses in Manchester such as dealership Moto Richmond and repair shop Ace Cycles. Other area shops include downtown-based custom builder Classified Moto.

Business like this are what is needed, to help revitalize, an important small industrial section of the City. More trade and skilled businesses along Commerce mean more opportunities for jobs especially for the residents in the Southside.