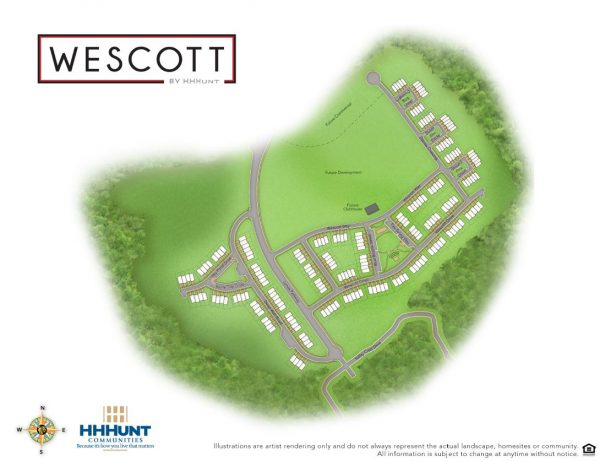 A multimillion-dollar land deal has further cleared the path for a multifamily development in the works near Brandermill.

HHHunt Communities closed March 6 on its purchase of nearly 72 acres at 4001 Lonas Parkway, where it is planning its $21 million Wescott development. The company paid $3.675 million for the acreage, which consists of three parcels southeast of the Hull Street Road-Route 288 interchange.

Plans calls for 480 townhomes on the site, 18 acres of which will include five buildings housing 120 condos to be built by Ryan Homes. The stacked condos will range from 1,200 to 1,800 square feet, and the condos and townhomes are planned to be priced starting in the low to mid-$200,000s. Sales are expected to start in the second quarter.

Jonathan Ridout, vice president of land development for HHHunt Communities, said Smith brought the site to the attention of the company, which liked the location for its proximity to Hull Street Road’s commercial corridor.

He said the site was assembled years ago as part of a larger master-planned community, with retail facing Hull Street Road, the Addison at Swift Creek Apartments farther south and the land for residential or other uses in between.

“We looked at it, liked the location a lot, decided to go back in and do a rezoning on it to eliminate the cash proffer, because this area was in a redevelopment corridor for Chesterfield County,” Ridout said.

“A lot of development is going on farther out west in the Amelia area, so this location to us has some advantages because it doesn’t have the traffic, it’s right off of 288 and it’s got all the commercial components that are right there from an amenity perspective that potential buyers are going to want,” he said, listing grocery stores, gyms and restaurants as examples.

Ridout said the company is working to finalize plans with Chesterfield County and anticipates breaking ground in about a month. The development also would include a 2,000-square-foot clubhouse, an amphitheater and green space.

The project adds to other investments in the works or underway around the 288-Hull Street Road interchange.

On the other side of the interstate, developer Guy Blundon is planning a $30 million, 240-unit apartment project on 11 acres at 5411 Commonwealth Centre Parkway. Realty Ventures Group, which developed the 740-acre Tarrington on the James, is planning a 500-lot development called Swift Creek Station on 185 acres near the interchange.

these stacked townhouses have really caught the market. They are built at apartment densities, but provide home ownership opportunities at reasonable pricing. Besides, they give the upper unit residents a good workout each day!

by “stacked townhouses” do you mean floor through condos where each Condo occupies the entire floor?

I believe the idea is a 4 story building with the first Townhouse occupying floors 1 and 2. The second townhouse occupies floors 3 and 4.

No, although what you suggest would make more sense if I was ever looking to live in the counties. Stacked condos means one condo is stacked on another. They’re much more common in NOVA and now we have some in the Short Pump area. The first two floors comprise one condo unit and floors three and four compromise the second condo. I’m surprised we have not seen more condos where each owner has single story living and an elevator. Monument Square’s single story condos sell almost immediately, for example. Rocketts Landing offers a good amount of single story living, but… Read more »

“Stacked townhouse” typically refers to 2-over-2 buildings, where a 2-story residence is over another 2-story residence. These are often built at density slightly higher than 3-story townhomes. With 120 condo units spread over 5 buildings (24/building), my guess is these are not stacked townhomes but apartment-style condos wherein all units are 1-story.

Actually, the 2 over 2 townhouses are developed at TWICE the density of regular townhouses, more in line with suburban apartment densities. I’ve seen some planned now for up to 30 units per acre.

That’s exactly what they’re considering in Chesterfield. 24 units per floor – 18 for a three story unit.

Bruce, that math you’re using is misleading. With 2/2s (4-story) versus 3-story THs, you’re gaining one story and doubling up on some stair area (inefficient use of finished area). So comparing like-square footage homes with like-setbacks, at most you could get around 25-30% more density. We could also use envelopes to see if your claim passes the smell test. If we use typical envelopes, a typical 2/2 is about 25’x50′. So 2 units need an envelope of 1,250 square feet. Average square footage of the units is around 1,900-2,000 finished square feet. Each gets a garage. A common 1-garage townhome… Read more »