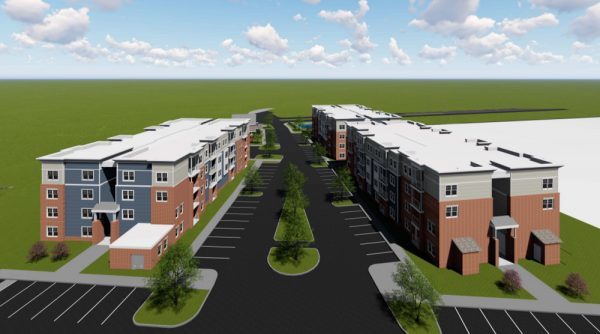 The Alexander @ 1090 is set to rise on a 3.1-acre site at 1090 German School Road in South Richmond. (Renderings courtesy TS3 Architects)

With one new apartment project in the works on the Northside, a Hampton Roads-based multifamily development company now is claiming new territory in South Richmond.

The Virginia Beach-based firm closed on the site April 18. It most recently was assessed by the city for $110,000, according to real estate records.

“It was an opportunity we jumped on,” said Freddie Fletcher, the Lawson Cos. development associate. “The way the site was laid out made it desirable for us to purchase.”

Dubbed the Alexander At 1090, plans call for three four-story apartment building to rise on the site, Fletcher said. 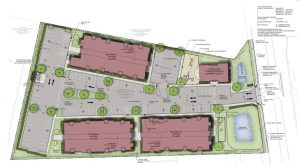 A site plan for the new development. Click to enlarge.

“We see this project drawing a lot of families,” Fletcher said of the firm’s desire to not include one-bedroom or studio units. “It’s a good market over there for families looking for an affordable, Class A apartment.”

Construction on Alexander At 1090 is slated to begin soon, Fletcher said, with its first occupants moving in by early summer 2020.

The community also will include a clubhouse with a fitness center, laundry facilities and a leasing office. Other amenities include a dog park, playground, and indoor and outdoor bike storage.

The Virginia Housing Development Authority is providing financing for the development. 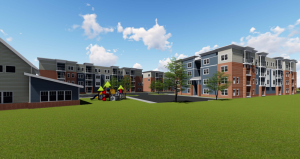 Other amenities include a dog park and playground.

The Alexander At 1090 will be Lawson Cos.’ first development to get underway in metro Richmond. Fletcher said the firm remains under contract to purchase the large scrap metal recycling facility at 1207 and 1207-A School Street, where it plans to build a 200-unit apartment development on the 5.3-acre site.

That project, dubbed The Foundry, would be cleared to make way for four five-story buildings with a mix of one-, two- and three-bedroom units to rise on the site.

Lawson Cos. is expected to close on the heavily industrial site by the fourth quarter of this year, Fletcher said, with construction starting soon after.

He said Lawson Cos., which has $290 million in ongoing development across Hampton Roads, Northern Virginia and now metro Richmond, is bullish on the region, and is looking to do more deals in the area.

“We like the Richmond market,” Fletcher said. ‘There is a lot of opportunity in the area, and we’re excited to be bringing this project to Richmond, and we hope to develop others in the future.”

It was a pleasure to work with Lawson in this purchase from my client Harper Holding. The two parties recognized the need for affordable family housing in Richmond and worked together for three years to achieve this development plan. The City gets a new community for those who need a clean, safe environment for working class families.