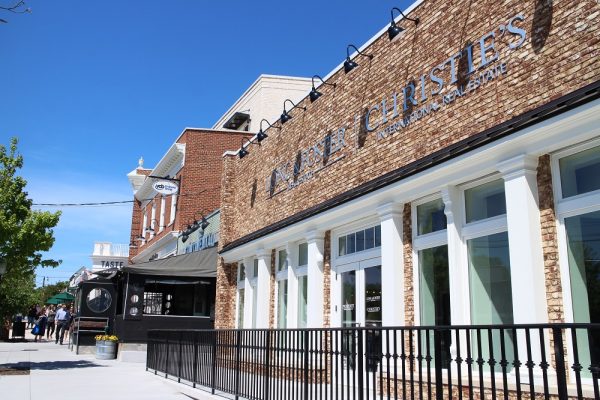 A national real estate brokerage’s flagship local office opened its renovated and expanded space this week, capping off one of several office rehabs the brand is working on or recently completed across the region.

Long & Foster Real Estate’s Grove office reopened Monday with nearly twice the amount of space it previously had at 5702 Grove Ave., the result of an expansion and renovation coordinated as part of the Westhampton on Grove mixed-use development.

The redevelopment of the former Westhampton Theater site provided an opportunity for the brokerage to enlarge the office, nearly doubling its footprint from 5,900 to 11,000 square feet between spaces on both sides of anchor retail tenant Taste.

The new space provides more elbow room for the office’s 113 agents and four support staffers, with both open areas for agents to interact, and private rooms and offices for individual business needs.

A detached space on the westernmost end of the building includes offices specifically for real estate teams and was designed to encourage collaboration between them, said Brian Haug, Long & Foster’s regional manager. 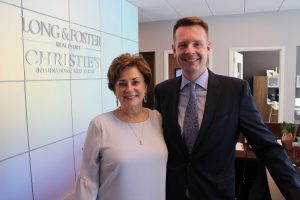 “It was important for us to grow our space,” Haug said. “We were thinking about creating a team space, a think tank for teams to grow their business and work with other like-minded teams. We had an opportunity with a couple players in town that wanted to come. It’s kind of a testament that there was a need in the business to have some space that was designed specifically for growing teams.”

Those teams include The Strum Group, which joined Long & Foster in 2017, as well as The Glaser Group, which joined last year, among others. Haug said teams have come over from such brokerages as Coldwell Banker, ERA Real Estate, Joyner Fine Properties, Keller Williams Realty and Nest Realty.

Haug said the Grove office, led by managing broker Dawn Bradley, likewise has grown in the number of home contracts written. He said year-to-date numbers put the office up 31 percent in annual volume and 47 percent in units sold in the same period last year, with $137 million in contracts written.

Regionwide, he said Long & Foster Richmond is up 13 percent in volume and 9 percent in units sold, with over $911 million in contracts written over this time last year.

To accommodate that growth, the brokerage has invested in improvements to other offices across the region, including to its Harbour Point office in Midlothian, its Tri-Cities Southpark location in Colonial Heights and its Virginia Properties office on Libbie Avenue, around the corner from the Grove office. Renovations to its Strawberry Street office in the Fan are underway as well.

Haug would not disclose costs for those projects but said such investments in capital improvements are budgeted year to year. He said the brokerage plans to upgrade its Stony Point office next year.

The investments add to other enhancements Long & Foster has made to its local footprint in recent years. In early 2018, the brokerage opened an office in Church Hill, and last fall, it opened an office in Centerpointe in Midlothian that primarily houses The Yeatman Group, a 28-person team with 15 sales agents that Haug described as the brokerage’s highest-performing local team.

With The Yeatman Group accounting for the bulk of its output, Haug said the Centerpointe office is up 73 percent in annual volume and 74 percent in units sold over last year, with $70 million in contracts written as of this week. The group is led by Kyle Yeatman, a former sales and marketing manager for Lakeside-based builder StyleCraft Homes before joining Long & Foster in 2014.

For the Grove office rehab, Long & Foster used Soma Architects in Alexandria and Henrico-based RGI General Contractors. With the office anchoring the brokerage’s local efforts, Haug said the expansion was a priority for the company. 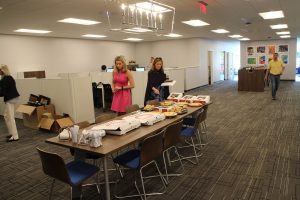 The enlarged space includes open areas as well as private rooms and offices.

“This is our largest office and kind of the center of the Richmond market, so it’s a very important place for us to be,” Haug said. “It’s our flagship as far as Long & Foster goes in Richmond.”

The office is one of many in a crowded field of real estate brands that have planted their flags in the Libbie and Grove area.

Coldwell Banker Avenues is located on Libbie, while Select Properties of Virginia is doors down from Long & Foster, having dropped its Engel & Volkers affiliation this year. Long & Foster is the local affiliate for Christie’s International Real Estate.

Shaheen, Ruth, Martin & Fonville Real Estate, made up of a number of former Long & Foster agents, opened an office on Grove last year and recently expanded to the Southside. Other firms at Grove and Libbie include Villani Real Estate and Maison Real Estate Boutique.

Congratulations! It’s a beautiful building, and PolycreteUSA is proud to have been a part of the project.